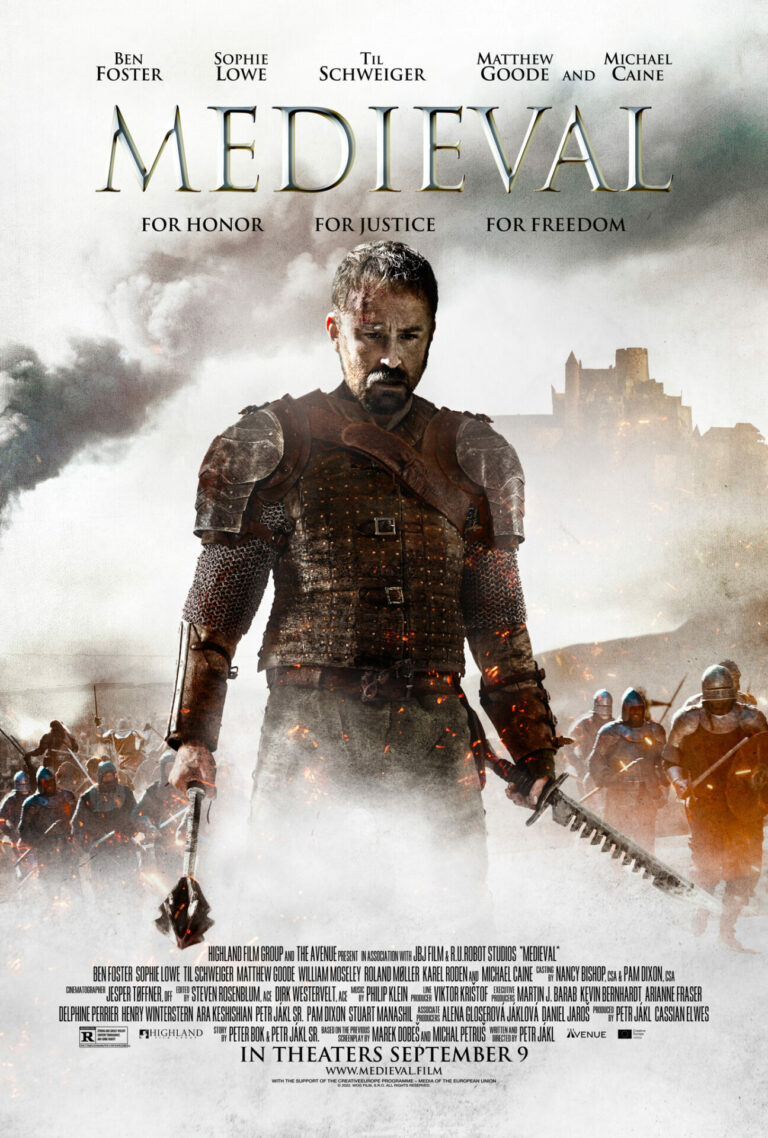 MEDIEVAL is based on the true story of 15th Century Czech warlord and religious reformer, Jan Žižka. Žižka, who defeated armies of the Teutonic Order and the Holy Roman Empire, often entering battle outnumbered but never losing a battle he led. A strategic genius, Žižka stands up for Christian faith in God and freedom as the Catholic Church justifies horrific oppression and violence. Žižka and his men are paid to kidnap Lady Katherine, the fiancée of a powerful lord. They discover Katherine is caught in a battle between European monarchs. So, Žižka and his men fight to save Katherine.

MEDIEVAL has a strong Christian, moral worldview that stresses the importance of freedom, true Christian faith and family. Žižka is a foil to the Catholic church at the time, which oppressed its people and whose kings used God’s name to justify horrific acts. The acting from Michael Caine and Ben Foster is wonderful. The grizzly, realistic costumes and sets help MEDIEVAL live up to its name. Despite the Christian symbolism throughout MEDIEVAL, MOVIEGUIDE® advises extreme caution for excessive, gory violence and brief explicit nudity.

(CC, BB, PP, ACAC, VVV, S, NN, AA, MM):
Dominant Worldview and Other Worldview Content/Elements:
Strong Christian, moral worldview where warrior and religious reformer fights for freedom and truth against tyranny, including a song about faith, images of crosses and references to prayer
Foul Language:
No foul language
Violence:
Extreme, gory, bloody violence includes people being beheaded, losing arms and legs, being crushed by boulders, mauled by a lion, and other war violence, one scene shows a burned corpse, a young boy is impaled on a stake but isn’t dead, a woman is raped with upper female nudity shown, and the scene where the main villain and his men pillage an innocent village is intense and graphic
Sex:
Implied fornication includes a woman and man partially naked in bed, and there’s a rape scene
Nudity:
Brief upper female nudity in two scenes and upper male nudity
Alcohol Use:
A couple scenes of drunkenness at a bar; and,
Smoking and/or Drug Use and Abuse:
No smoking or drugs;
Miscellaneous Immorality:
Greed, corruption, betrayal, and oppression, but rebuked.

MEDIEVAL is based on the true story of 15th Century Czech icon, warlord and religious reformer Jan Žižka, played by Ben Foster.

The movie begins as Europe is in a state of turmoil, with opposing political and religious views. Meanwhile, greed and corruption spreads like wildfire among the monarchs of the land.

Jan Žižka and his men, hired mercenaries, protect Lord Boresh (Michael Caine) as rival rulers battle for the throne. Žižka is a fearless warrior and a genius strategist who commands the respect of those around him.

Žižka and his men are hired to kidnap Lady Katherine, to use as a bargaining chip for another monarch. However, as Žižka transports Katherine to their destination, he learns that the enemy, a ruthless leader named Torak, has been hired to get Katherine back. Torak hunts down and murders Žižka’s nephew and captures his brother.

Žižka agrees to exchange Katherine for his brother, but vows to save Katherine from the mire of political war that wages between her future husband and the other monarchs.

At great sacrifice to his own wellbeing, Žižka must overcome enemies from all sides as he fights to save Katherine, the peasants under the oppressive rulers and stand for a true faith in God.

MEDIEVAL has a strong Christian, moral worldview that stresses the importance of freedom, true Christian faith and family. Žižka is a foil to the Catholic church at the time, which oppressed its people and whose Kings used the name of God to justify horrific acts. The acting from Michael Caine and Ben Foster is wonderful. The grizzly, realistic costumes and sets helps MEDIEVAL live up to its name. Despite the faith and Christian symbolism throughout MEDIEVAL, MOVIEGUIDE® advises extreme caution for excessive, gory violence and brief explicit nudity.