"Not So Family Friendly" 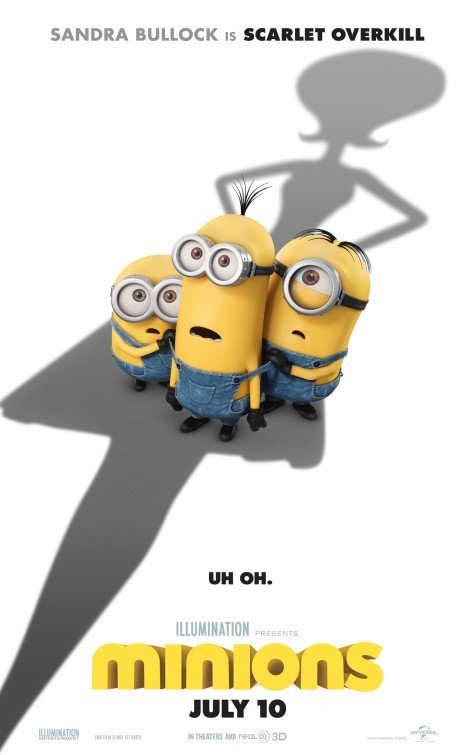 MINIONS is not a family-friendly movie. When the minions are left without a master, Kevin decides to set out with the help of Bob and Stewart to find an evil villain to serve. They travel great distances until they see an advertisement for Villain-Con, the biggest convention of villains in the world in Orlando, Florida. They ride with a villainous family to the conference and help rob a store. The little girl idolizes Scarlett Overkill, the world’s best supervillain and Villain-Con’s main speaker. Scarlett recruits the minions. Along with her inventor husband, they plot to take over the world.

MINIONS has humorous moments, but there’s a lack of substance behind the laughs. There’s a lot of cartoon violence, some of which discerning parents will find objectionable. The violence looks fun and is showed in an appealing way. At one point, Bob is nice to Scarlett, and Kevin steps up as a selfless leader, but, otherwise, the main characters behave in bad ways. Thus, they remain despicable at the end, still chasing the next villain to serve. Therefore, MOVIEGUIDE® advises extreme caution for MINIONS.

(PaPa, Ho, C, VV, N, A, MM) Fairly strong pagan worldview, with a miscellaneous immorality and violence throughout showing crime as fun and evil as admirable and something to be followed, there is no change of heart from their despicable ways, they continue to find more crime to commit, plus some homosexual elements includes two cases of cross dressing, and a homosexual stylist designs the Queen’s dress, one character becomes selfless at one point; no foul language; strong comic and slapstick violence includes many violent deaths occur that are very harsh, violence is portrayed in a fun way, an execution is ordered, all of the villains chase the minions trying any way possible to kill them, one character has a torture chamber; characters shot from behind wear thongs; alcohol use; no smoking or drugs; and, strong miscellaneous immorality includes the title characters are always trying to find the worst and most evil villain to serve, a family robs stores together on the way to Villain-con, villains are seen as celebrities and something to aim toward, a hat is used to hypnotize guards into submission, the queen after being dethroned disrespects England and is found drinking in a bar.

MINIONS, unlike the DESPICABLE ME movies, stays despicable and glorifies crime, villains and violence. Without a change of heart or moral message, MINIONS distracts the audience from the plotless storyline with lots of slapstick humor.

When the minions are left without a master, Kevin decides to set out with the help of Bob and Stewart to find an evil villain to serve. They travel great distances until they see an advertisement for Villain-Con, which is the biggest collection of villains in the world in Orlando, Fla.

They ride with a family to the conference that is also villains and assist them in robbing a store. The little girl idolizes Scarlett Overkill, the world’s best supervillain and the main speaker at Villian-Con. Scarlett Overkill recruits the minions. Along with her inventor husband, Herb, they hatch a plot to take over the world.

Scarlett wants the Minions to steal the Queen’s crown because Scarlett was abandoned as a child and believes it will make her feel loved. She seeks revenge for everyone that has ever doubted her and believes if she can overthrow England she will have that chance. Herb equips the minions with weapons, including a “hypnohat” to hypnotize the guards.

Once Bob pulls the Arthurian magic sword from the rock, he is automatically deemed the new king of England. When he realizes this makes Scarlett angry, he turns over the throne to her. Even after showing kindness to her, she shows none in return and throws Bob and the other two minions in the dungeon to be tortured by Herb. They escape the dungeon, and she sends all the evil villains to search the city to execute them.

There are many humorous moments in MINIONS, but there is a lack of substance behind the laughs. There is a lot of frenetic cartoon violence, some of which will be objectionable to discerning parents. The violence includes lava lamp guns, hypnohats, guns, bombs, swords, pushing, and hitting. All this violence looks fun and is showed in an appealing way.

Although at one point Bob is nice to Scarlett and Kevin steps up as a selfless leader, the rest of the movie shows the main characters acting in a bad way all the time. Thus, they remain despicable at the end, still chasing after the next villain to serve.

Because of all this, MOVIEGUIDE® advises extreme caution for all viewers of MINIONS.