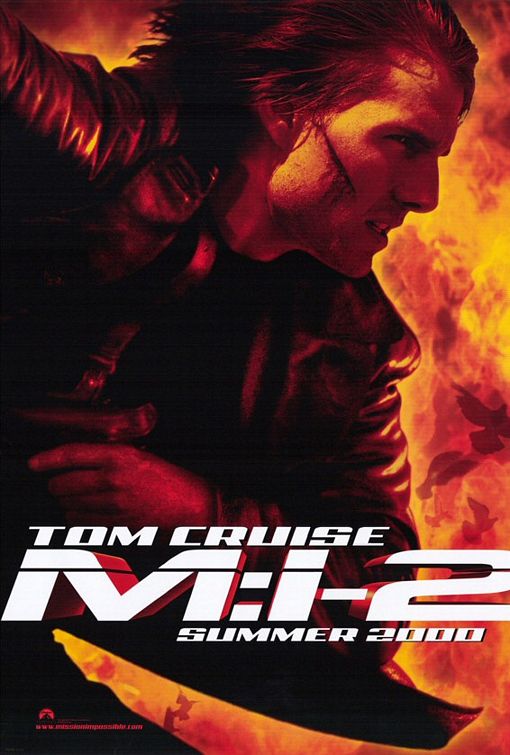 M:I-2, the sequel to the hit MISSION: IMPOSSIBLE, features lots of pumped-up action. In the story, Tom Cruise again plays special agent Ethan Hunt. This time, Ethan must stop a rogue agent from unleashing a deadly virus. Caught in the crossfire is an international female thief, played by Thandie Newton. Both Ethan and the rogue agent are in love with the beautiful thief, making for difficult complications. In the end, Ethan’s quest for the deadly virus also becomes a quest to save her life and repair the damage between them.

Hong Kong-trained action director John Woo confessed recently that he is a Christian. He uses several Christian symbols to identify Tom Cruise’s character with a saintly quest for redemption and virtue. Woo’s Christian worldview, and the relationship between the hero and the damsel in distress, helped make M:I-2 an above-average action thriller. Also, although the action in M:I-2 is strong and intense, it never exceeds the boundaries of the movie’s PG-13 rating. The hero, in fact, shows appropriate moral restraint in his fighting. Finally, the amount of foul language is lower and milder than usual, as is the obligatory sexual content

The first MISSION: IMPOSSIBLE with mega-star Tom Cruise had a final pumped-up action sequence with a speeding train and a helicopter. The sequel, M:I-2, has lots more action scenes like it, though they are a little more believable than the one in the original. According to Paramount production sources, Cruise was responsible for bringing in Hong Kong-trained director John Woo (FACE/OFF and HARD BOILED), who specializes in making beautifully choreographed, character-driven action movies. The look of the movie is all Woo’s, but the movie is all Cruise’s.

In the story, Cruise once again plays special agent Ethan Hunt. While on vacation, Ethan is called on a special mission. Details are sketchy, but his boss orders Ethan to recruit an international thief named Nyah Hall, played by actress Thandie Newton of BELOVED. Recruit her in 48 hours, says the boss.

Ethan thinks he is recruiting Nyah for her thieving skills, so he has no qualms establishing a strong romantic attraction to his quarry, a relationship that leads to a sexual encounter. When he meets his boss in Spain, however, the boss tells Ethan that Nyah is supposed to re-establish a relationship with a man named Sean Ambrose. Previously, Ambrose had impersonated Ethan on a couple important missions, but Ethan makes clear that he never liked the man. Now, Ambrose has stolen Ethan’s identity to obtain a deadly new virus and its antidote, murdering a plane load of civilians in the process. Apparently, there is a brutal side to Ambrose’s personality, a huge character flaw that Nyah knows all too well. In fact, the movie informs viewers that she had walked out on him six months ago in disgust.

Ethan is upset that he now must ask Nyah to attract Ambrose’s attention so that he and his Mission: Impossible teammates can find Ambrose and get back the deadly virus and its antidote. Nyah is none too happy either, but she agrees to the mission in order to remove her criminal record. A mistake eventually puts her very life in danger from the virus, however. Ethan’s quest for the deadly virus then becomes a quest to save her life and repair the damage between them.

In a June interview with PREMIERE magazine, director John Woo confesses that he’s a Christian. Such a confession is noteworthy because Cruise’s character Ethan is identified with Christian symbols several times in the movie. First, Ethan is compared to a procession in Spain honoring Christian saints. Saints are never treated well by their people, Ethan’s boss tells him as he finally informs Ethan of the real reason for recruiting Nyah. The religious procession to which he refers is lit with several bonfires. Among the bonfires are images of Christ crucified. Later on in the movie, viewers see Ethan’s figure surrounded by fire. In one scene, he drives a motorcycle through the fire of an explosion. Also near the end of the movie, Ethan is photographed next to a white dove, an image often appearing in John Woo’s movies.

In PREMIERE, Woo says, “Doves represent the purity of love, beauty. They’re spiritual. Also, the dove is a messenger between people and God. When I shot THE KILLER, the killer and the cop work in different ways, but their souls are pure, because they do the right thing . . . . When the men die, I cut to the dove flying – it’s the soul, rescued and safe, and also pure of heart.”

In this light, it is significant that Ethan’s character in this movie, although he can defend himself with guns, his feet and his fists, never does anything intentionally cruel. Everything he does, he does in order to stop the villains, rescue society from the deadly virus and save the girl, the archetypal damsel in distress. Furthermore, Ethan shows mercy toward the main villain at a crucial moment. Of course, the movie rewards this mercy with ultimate success.

In addition, although the action in M:I-2 is strong and intense, it never exceeds the boundaries of the movie’s PG-13 rating. Woo and Cruise have told the press that this was always their intention for this film. They cut tastefully away from all the blood and guts, except when they reveal the terrifying effects of the virus.

Despite this, there is the matter of the implied fornication which takes place between Nyah and the two male leads. There are also a couple mild sexual innuendoes in two scenes. The amount of foul language, however, is kept to a lower level than usual, though not totally gone. In fact, the movie contains only several strong obscenities and only one mild exclamatory profanity.

John Woo’s Christian worldview helped make M:I-2 an above-average action thriller. Full of death-defying stunts and plenty of exciting action, the movie also manages to create interesting conflicts between the characters. There are definitely much worse films this summer to attract the raging hormones of America’s youth.