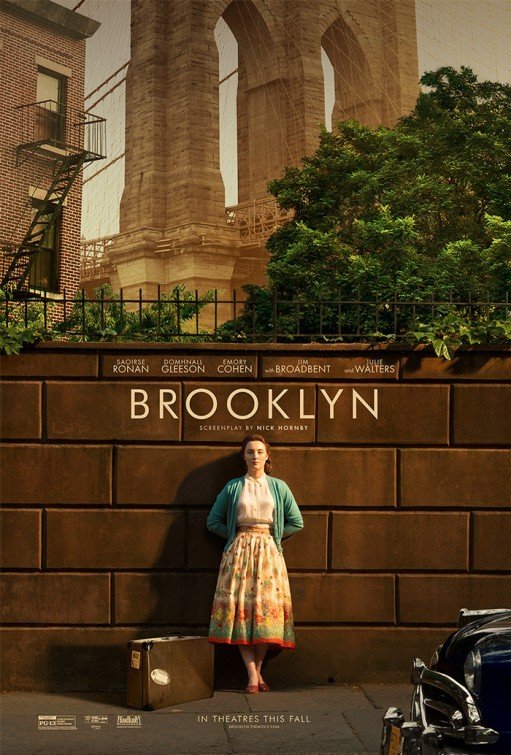 Set in the early 1950s, BROOKLYN follows a pious, intelligent young Irishwoman, Eilis [pronounced “Eye-leesh”], who emigrates to New York to find a better life. She has trouble providing for herself in Rural Ireland, where her widowed mother and older sister live. At first Eilis is homesick, despite the kindly Catholic widow who runs the boarding house where she stays. However, the local Irish priest comforts her and pays for night classes in bookkeeping. Then, Eilis meets Tony, a wonderful, handsome Italian plumber. However, her happiness is interrupted when a tragedy forces her to return to Ireland. Will she return to Tony and her new life in America?

The first half of BROOKLYN is marvelous. Director John Crowley takes viewers on an emotional ride that’s suspenseful, funny, touching, and poignant. The acting is superb, including Saoirse [pronounced “Seer-sha”] Ronan as Eilis. Even better, the Catholic landlady and the Catholic priest display intelligence, wit, compassion, strength, and faith. Sadly, the movie’s moral worldview and positive mood are almost totally spoiled by a gratuitous bedroom scene in the middle. BROOKLYN also has several strong obscenities.

(BB, CCC, Pa, Ro, PP, CapCap, L, SS, A, D, M) Strong moral worldview with very strong and positive Christian content, including a very positive depiction of an Irish parish priest in New York City and a Catholic woman who runs a boarding house in Brooklyn in the 1950s, including promotion of prayers, faith and compassion, but the moral worldview is marred by an immoral fornication scene in the middle of the movie and by some light Romantic elements, though the movie has a strongly positive view of America and its capitalistic system of hard work and personal advancement in the 1950s, including its immigrant and native populations; five or six obscenities (including two “f” words, one in Gaelic and one in English, one or two “s” words, and minor character calls two other women “bitches” because they obviously lied to her about going to the movie to avoid taking her to the local parish dance), and three exclamatory light profanities, plus woman gets terribly seasick; no violence; depicted fornication scene with couple mostly clothed on bed, and woman keeps her American marriage secret to her mother and friends, including another man who’s interested in her; brief upper male nudity in one scene; alcohol use; smoking but no drugs; and, lying, including female protagonist hides her secret marriage to an American man from her friends and mother in Ireland and dances with a Irish man who’s interested in her.

BROOKLYN has some of the greatest moments put on film in recent years, but it also has one of the most disappointing moments. The movie is about a pious female Irish Catholic immigrant who comes to New York City in the 1950s, but must decide whether to return there when a tragedy forces her to return to Ireland for a month to comfort her distraught mother. BROOKLYN has some of the funniest, most winsome, most religious, and most emotionally powerful moments ever put on film, but it is spoiled by a gratuitous bedroom scene in the middle, plus several strong obscenities.

The movie opens about four years after the father of Irish lass, Eilis (Eye-leesh), a low-paid clerk in a market run by a stingy, unfriendly older lady, died in 1947. Eilis has no prospects at a better life, and not much in the way of young men to marry. So, the local priest helps Eilis obtain a work visa, a job and an Irish boarding house for Brooklyn, New York. With great sadness, her mother and sister, Rose, who works as a bookkeeper, say goodbye to Eilis as she sets sail for New York City.

On the boat, Eilis is befriended by her cabin mate, an Irish woman who regrets coming back to visit her family in Ireland. The woman comforts Eilis when she gets seasick and gives her tips on how to make sure the immigration officials will let her into the country despite her work visa. Be confident and polite, and don’t cough, the woman says.

Eilis finds that the boarding house is run by a sharp-witted, funny, Catholic widow, Mrs. Kehoe. They have dinner together with about four or five other unmarried Irish women. They often go to the monthly parish dance together. Two of the women are young and beautiful, but chatty and giggly. In a funny scene, the widow chastises them for being so giggly at the dinner table. Meanwhile, Eilis has a job at a stylish department store that sells things she can’t afford.

As Eilis gets letter from her beloved sister in Ireland, she becomes terribly homesick. Her boss gets very concerned, so the friendly and wise parish priest, Father Flood, comes to comfort Eilis and tells her he has decided the parish will pay for her to attend night school to become a bookkeeper just like her sister.

Father Flood kind words and advice help Eilis to keep plodding along. She enjoys the bookkeeping classes. One night, she agrees to go with a new but slightly disagreeable young woman at the boarding house to the parish dance. There, she meets a handsome young American plumber, Tony. The two hit it off pretty much right away. Tony is a likeable guy who’s very interested in what her life is like. Eilis is surprised to learn that Tony says he’s Italian. When she asks him why he showed up at an Irish parish dance, he says he prefers Irish girls.

Tony is the perfect gentleman. He also has a very nice, friendly family, including a precocious, funny young brother who speaks his mind, even when it’s slightly uncomfortable. At the dinner table, he goes too far, and Tony’s father takes him away from the table, then returns with the boy, who delivers a funny apology.

Her new romance makes Eilis very happy. She gets even happier when she learns she passed her bookkeeping finals with flying colors. Everyone is proud of her accomplishments, including Father Flood.

All this happiness is suddenly interrupted when her sister, Rose, suddenly dies from a terminal illness she hid from the family. Eilis will have to miss Rose’s funeral, but she decides to return to Ireland right away when she learns her sister’s death has left their mother distraught with grief. The problem is, she and Tony have professed their love for one another. Tony can’t bear to see Eilis return to Ireland. What if she doesn’t come back? So, he asks Eilis to marry him secretly, and Eilis has a big decision to make.

The first half of BROOKLYN is absolutely marvelous. Director John Crowley takes viewers on an emotional ride that’s suspenseful, funny, touching, and incredibly poignant. Saoirse (“Seer-sha”) Ronan does a superb job playing Eilis, who truly is one of the most appealing female characters ever created for the movies. Sadly, before her character goes with her boyfriend to get married at the courthouse, Eilis takes Tony to her private basement room at the boarding house, and there’s a clothed sex scene between them. The sex scene totally destroys the movie’s powerful, somewhat old-fashioned mood. It also negates the strong Christian worldview the movie was subtly but dynamically building.

The second half of BROOKLYN doesn’t quite make up for this terrible blunder. That said, the second half does its own powerful, sad and uplifting elements, including positive Christian, moral content.

[SPOILERS FOLLOW] Thus, when Eilis returns to Ireland, her return makes her mother very happy. Her best friend, Nancy, is also happy. However, Eilis tells no one of her secret marriage to Tony. Then, Nancy announces her marriage to George Sheridan, a handsome player on the local rugby team. So, Eilis agrees to stay an extra week to attend the wedding.

One day, Eilis agrees to meet Nancy and George for a luncheon. Because she doesn’t know about Tony, Nancy brings another young man and rugby player, Jim, thinking Jim would be a perfect match for her friend, Eilis. Eilis doesn’t think much of the rugby players because of their arrogance and greased hair. However, like Tony, Jim is a really nice, chivalrous young man. He’s clearly attracted to Eilis and even stops greasing his hair like the other rugby players do.

Yet, Eilis still keeps the secret about her marriage to Tony back in New York. Meanwhile, the company where her sister worked, suddenly needs a bookkeeper. They ask Eilis to step help them. She agrees and does such a great job that the owner wants her to stay.

So, everyone back home wants Eilis to stay in Ireland, especially her dear mother, but what about Tony and the new life she’s created in Brooklyn? Clearly, Eilis has another major decision to make. [SPOILERS END]

All the actors in BROOKLYN do a wonderful job. In fact, BROOKLYN has one of the best ensemble casts ever assembled. It may remind classic movie fans of the best casts assembled by American and British filmmakers during the studio system era of movie making in those two countries. Even Emily Bett Rickards, who plays Felicity Smoak on CW’s smash TV hit, ARROW, unexpectedly shows up to do a nice turn.

Besides Ronan, however, special kudos go to Emory Cohen as Tony and veteran actors Julie Walters and Jim Broadbent as Mrs. Kehoe and Father Flood. These four should get noticed during awards season if there’s any justice in this world at all. So should Director John Crowley and Writer Nick Hornby, the acclaimed novelist who does a great job adapting the prize-winning novel by Colm Tóibín on which BROOKLYN is based.

All in all, therefore, BROOKLYN is still a four star movie with a strong moral worldview. It not only depicts a positive view of America and New York City but also has two very strong Christian characters in Mrs. Kehoe and Father Flood who display intelligence, wit, compassion, strength, and faith. Christian filmmakers making faith-based movies would do well to study the scenes involving Mrs. Kehoe and Father Flood. This is how it’s done, people!

That said, the sex scene in the middle of BROOKLYN and the several strong obscenities that pop up during the movie warrant extreme caution. This is really too bad, because, otherwise, BROOKLYN is a truly great movie (see our CONTENT section for details).