"The Power of Love" 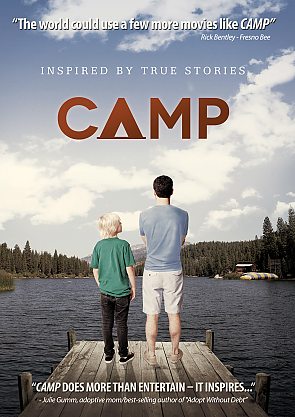 CAMP is based on true events. Eli, a 10-year-old wayward boy with neglectful parents, is sent to a summer camp for troubled kids. During camp, the counselors share Bible stories and worship songs. Eli’s counselor, Ken, is a self-absorbed financial advisor with ulterior motives. He’s working at the camp to gain the approval and trust of one of the camp’s wealthy benefactors. Ken and Eli at first spend much of their time and energy insulting each other, breaking the rules, and not getting along. When Eli decides to be vulnerable and open up to Ken, their relationship begins to change.

CAMP is well produced and acted. There is a clear, redemptive storyline with Eli and Ken transforming in the end. Even better, CAMP has a strong Christian, moral worldview. There are several positive scenes featuring Bible stories, Christian songs, and prayer. Also, the movie extols compassion and forgiveness. The themes of child neglect, family substance abuse, and some foul language warrant caution for older children. That said, CAMP brings to light many of the challenges facing children from troubled or broken homes.

(CC, BB, L, V, N, AA, DD, MM) Strong Christian worldview as Eli attends a camp with Christian camp counselors that teach about the Bible, worship and pray to God, with strong moral elements as counselors speak to another counselor about showing forgiveness and compassion; several light obscenities, an obscene gesture, vomiting scene; light violence includes boy gets cut and bleeds when he falls in glass, it’s implied father beats boy with a stick, and boy sent to hospital in an ambulance, boy punches and bites boys at summer camp for troubled youths, and father lashes out at camp counselors, knocks boy down, and boy hits his head and bleeds; no sexual content; upper male nudity when counselors and boys swim at pool; mother has an alcohol problems and estranged husband comes home looking for cash and alcohol; mother smokes cigarettes and later dies of heroin overdose; and, boy intentionally breaks someone’s glass windows and mirrors, boy steals from other campers, boy runs away from his counselor, counselor breaks camp rules and doesn’t want to work with troubled boy, man deceitfully becomes a camp counselor to win the heart and money of a possible wealthy client, father goes to jail, and boy’s parents are verbally abusive and forget his birthday.

The movie opens with 10-year-old Eli walking along some railroad tracks. As he idly walks along, he breaks a man’s glass window, falls and cuts himself, and runs home bleeding. Arriving home, his mother is irritable and ignores Eli’s predicament. She scolds him for not staying in his room. Beer bottles sit around in the living room and kitchen as his mom smokes away.

Eli goes to the kitchen to tend to his own wounds. Later, his mom gets ready to go out and gets blood on her clothes from where Eli was washing off his wounds. She grabs and shakes Eli and shuts him in his bedroom.

Hours later, his father comes looking for Eli’s mother, who owes him money. Eli hopes his father will remember it’s his birthday, but he doesn’t. Initially, the father seems happy to see Eli, but when he discovers most of his mother’s money is gone, he gets violently angry, breaks a broomstick, and it’s implied he begins to whack Eli with all his strength.

Eli is rushed to the hospital in an ambulance as his mother tries to rationalize to the police about leaving Eli in the house alone for hours without food. His father is gone. Two weeks later, Eli’s mother dies of a heroin overdose.

Eli is sent to a summer camp for troubled kids. At the camp, the counselors share Bible stories, lessons and worship songs and teach swimming and other activities. His camp counselor, Ken, is a self-absorbed financial advisor with ulterior motives for working there to gain the approval and trust of one of the camp’s wealthy benefactors. Ken and Eli spend much of their time and energy for that week insulting each other, breaking the rules, and not getting along. When Eli decides to be vulnerable and open up to Ken, who then teaches Eli to swim, their relationship begins to change.

Eventually, Ken is faced with his own brokenness. Just as they begin to bond as friends, Eli’s angry father shows up, and Eli gets hurt. Eli lashes out at Ken. When the camp week ends, Ken and Eli find it hard to part. They have both changed. Ken has even begun to pray again. The two don’t know if they will see each other again. Then, Eli’s father, who’s now in prison, makes an unexpected request.

CAMP is well produced. There is a clear, redemptive storyline with Eli and Ken transforming in the end. Overall, the acting is good. The characters are believable embodiments of the actual persons behind this story inspired by true stories. The cinematography is nicely done. It captures the campground’s picturesque landscape and the intense, claustrophobic home life of Eli’s home.

CAMP has a strong Christian worldview with several positive references and scenes about Bible stories, Christian praise songs, and prayer. There are also some strong moral elements as Ken learns forgiveness and compassion for others. Caution is advised for older children due to the themes of child abuse and neglect, as well as some foul language. The movie’s young protagonist movie says a few “h” worlds and uses an obscene gesture in one scene.

CAMP brings to light many of the challenges facing young people from troubled or broken homes. It presents the harshness, fragility and resilience of people and the human spirit. Spiritually, God is always creating ways to work things out for the good. As Eli and Ken begin to understand and respect one another, they both begin to let go of deep childhood wounds. In time, they learn to love and be loved.