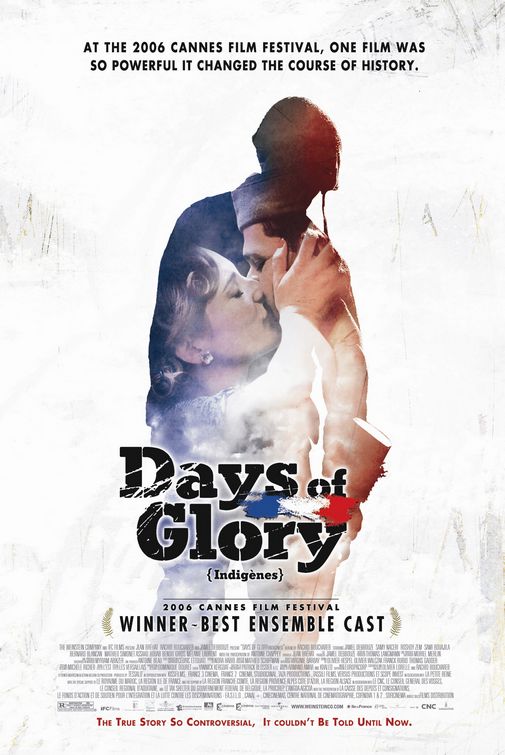 DAYS OF GLORY, a French movie, brings to light a little known aspect of the history of World War II. It follows the plight of four North African Muslims who fought for France against the National Socialists of Germany. The bigger story speaks of the men of the then French colonies of Algeria and Morocco who fought for France, but focuses on four true-life characters. They are enlisted from the small villages where each of them grew up and begin the war fighting the Germans in North Africa. Then, they are taken to France where they face major challenges.

DAYS OF GLORY tries to educate today’s people on the unfair ways the African soldiers were treated by the French. The movie presents several examples, but not in an emotionally strong way. The visual quality and special effects of the fighting sequences are pretty good. The directing seems average because the pace lags too often. The strongest quality is the acting. The movie's content is also a strong point, with the worldview extolling duty, self-sacrifice and patriotism. It was not necessary, however, to focus so much attention on the men's Muslim beliefs.

(B, PP, FRFR, L, VVV, S, N, A, D, M) Light moral worldview extolling morality, self-sacrifice, duty, and patriotism, with strong patriotic themes depicted by the willingness of North African men to serve in the military on behalf of the French, but extensive depiction of Muslim prayers and beliefs with four main characters being North African Muslims, but not directly “promoting” Islam per se; four obscenities, including one “f” word; extensive violence, all war related with a couple gory images; one implied occurrence of fornication between one of the main characters and a local French woman; no salacious nudity, but one image of a classic style painting of a nude woman hangs in a house; soldiers drink wine with their food; soldiers shown smoking a few times; and racism rebuked.

DAYS OF GLORY, a French movie, brings to light a little known aspect of the history of the men who fought in World War II. It follows the plight of four North African men who fought for France against the occupying Nazis of Germany. The bigger story speaks of all the men of the then French colonies of Algeria and Morocco who fought for France, but focuses on the four true-life characters of Said, Abdelkader, Messaoud, and Yassir. They are enlisted from the small villages each of them grew up in and begin the war fighting the Germans in North Africa. Then, they are taken to France, where they face their major challenges.

The writer, producers and director of the movie acknowledge that the purpose of the film is to educate the world on injustices that African soldiers faced by the French. Some examples of those injustices are represented in the film, but viewers probably will not the emotional “tug” they claim the movie brings. Part of the reason for that is that the reality of the shameful things that happened during that time in history are not portrayed strongly enough in the film. The reality is that the African soldiers were given lower pay, less privileges, and even less food supplies than the native French soldiers they fought along side during the war. That is certainly a regrettable fact, but not forcefully represented enough in the movie to inspire a deep emotional response.

The overall artistic quality is rather strong for a low-budget, independent film. One obvious distraction is the movie is in French with English subtitles. At times, there are grammatical mistakes in the subtitle writing. It’s also clear that many historical details had to be ignored because of the budget constraints the filmmakers faced. Another weakness of the film is the pace of the story. In between the action sequences of various battle scenes are the dramatic moments where the writer tries to draw viewers in and connect them to who these men are. Those dramatic moments are so slowly paced that viewers may begin to loose focus on the driving point of the movie and simply get bored. There is way too much lag time and attention given to events that are not crucial to the story and do not drive it forward. The story is understandable but does not draw you in as you might expect. The political agenda of the movie is an attempt to get the present day government of France, especially its president, to reinstate these soldiers and give back-pay and years of military pensions denied to the African soldiers who fought on behalf of the French during the war.

The movie’s worldview contains several underlying Biblical principles including submission to authority, patriotism, loyalty, and moral behavior. One example is when a French officer tells the men they can plunder supplies from the towns where they fight, but may not even touch the women. At the same time, the same principle is displayed in immoral behavior. One of the main characters meets a woman with whom he falls in love and sleeps. The sex is only implied and there is no nudity in the film (except for a “classic” style nude painting hanging in a room of a house).

The four main characters are Muslim and too much needless attention is given to their religious practices. Some of their behavior, such as the promiscuity, is contrary to Muslim teachings and obviously immoral. In representing their Muslim beliefs and practices, the movie does not seem to be overtly “promoting” Islam, but no Christian beliefs or practices are represented in the non-African characters. All of these points are very objectionable, but they may be “true-to-life” in the biography of the main characters.