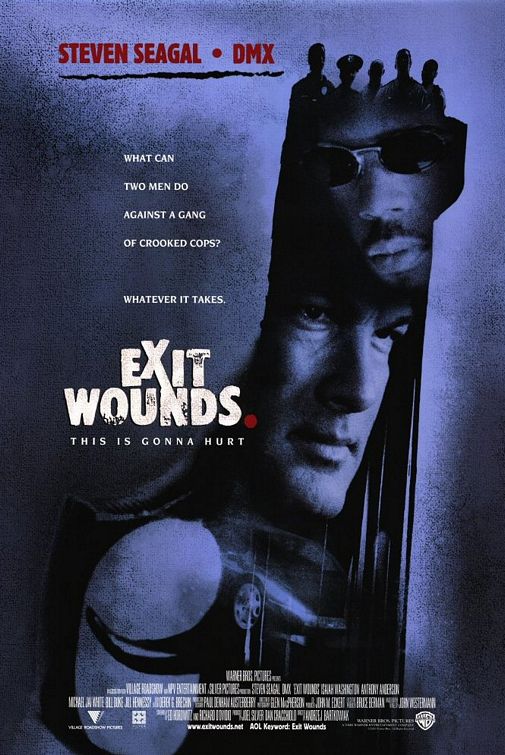 EXIT WOUNDS is a surprisingly good police thriller starring Steven Seagal, of all people, and rapper DMX. Seagal plays Detroit police detective Orin Boyd, a lone wolf who gets disciplined by being sent to the worst precinct in the city. There, he teams up with a black detective, George Clark, to investigate a mysterious black man named Latrell Walker, rapper DMX. Boyd finally finds out what’s really happening, and the usual mayhem ensues.

Seagal seldom has given so assured a performance as he does in EXIT WOUNDS. He shows the kind of magnetism that made him an action star in the early 1990s. Ably assisting him are the rest of the cast, including not just DMX, but Isaiah Washington as Detective Clark, Bill Duke as the police chief, and Tom Arnold and Anthony Anderson providing some comic relief. Regrettably, however, there is an awful lot of indiscriminate gunfire. Viewers also get an earful of more than 100 obscenities and an eyeful of female nudity in a couple scenes. Also excessive is a scene during the end credits where Arnold and Anderson ham it up with some crude jokes involving toilet humor, sex and smoking marijuana.

EXIT WOUNDS is a surprisingly good police thriller starring Steven Seagal, of all people, and rapper DMX, but it includes an excessive amount of indiscriminate gunfire, crudity and nudity.

Steven Seagal has perhaps never looked so good as he does in this story, where he plays a lone ranger, anti-authoritarian police detective (is there any other kind in Hollywood movies?) in Detroit named Orin Boyd. After saving the American Vice President’s life from some militants by throwing him into the river, Boyd is dumped into Precinct 15, the armpit of the city. There, he has trouble fitting in with the other macho officers. Eventually, however, after he attends an anger management class with a tabloid TV host in a very funny scene, the precinct’s beautiful female commander teams Boyd up with a friendly black detective, George Clark, played by Isaiah Washington from ROMEO MUST DIE.

Soon, George is tagging along with Boyd while he investigates a mysterious, well-clothed black man named Latrell Walker, played by DMX the famous rapper, who also appeared in ROMEO MUST DIE. Accompanying Walker most of the time is his funny chubby friend, TK, who owns a popular nightclub with semi-nude dancers. Boyd starts to realize what’s really happening, and his life, not just his career, comes dangerously close to an abrupt end. He must rely on unique sources of assistance before he can crack the case and put the bad guys in their place, which, in a Steven Seagal movie, means putting them six feet under the ground.

Comic relief from Tom Arnold as Harry, the TV host, and Anthony Anderson as TK provides some lively energy in between the mayhem. The characters and the acting are also a cut above most other movies in this genre, including Seagal’s. Seagal himself has seldom given so assured a performance. He shows here the kind of magnetism that made him an action star to begin with in the early 1990s. Ably assisting him in the action department are DMX as the mysterious Walker, Isaiah Washington as Detective Clark and reliable Bill Duke as the police chief.

Regrettably, however, there is an awful lot of indiscriminate gunfire in this action thriller, plus not one, but two, bloody impalings of some bad guys. Viewers also get an earful of more than 100 obscenities and an eyeful of female nudity in scenes set at TK’s nightclub and in a scene where Harry enjoys himself with two semi-nude women. Finally, there is a scene during the end credits where TK goes on Harry’s talk show, and they exchange jokes about toilet functions, sex and marijuana.