FOR LOVE OR MONEY 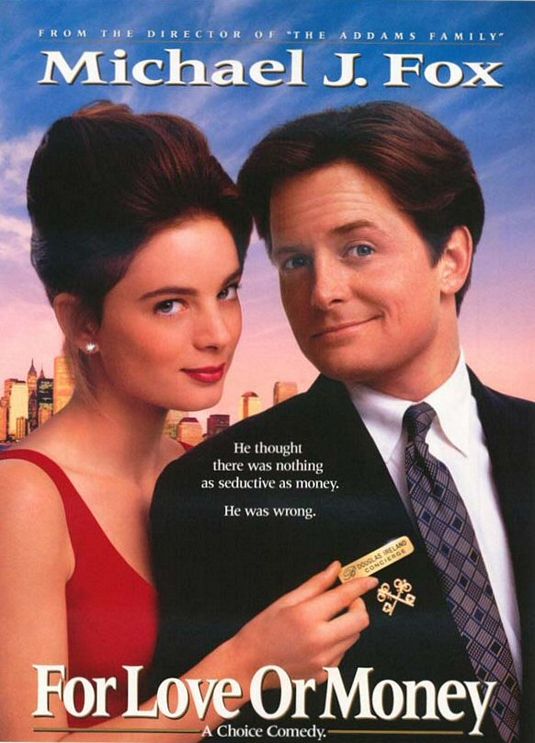 The film FOR LOVE OR MONEY is about Doug Ireland (Michael J. Fox), a hotel concierge in New York City, who procures favors for people--including providing rendezvous rooms for their mistresses. However, he falls in love with another man's mistress and faces a dilemma as to how he will resolve it. Although the film is funny, light and charming, the sexual innuendo and profusion of obscenities and profanities make it offensive.

In the movie FOR LOVE OR MONEY, New York hotel concierge Doug Ireland (Michael J. Fox) can get hotel guests anything they need including tickets to major events, the best deal on jewelry and a reservation at the best restaurant in town. When a wealthy, influential businessman, Christian Hanover offers to invest in Doug’s dream of building his own hotel, Doug is elated. In return, Christian, a married man, asks Doug to entertain his mistress, Andy. Christian, however, becomes more and more demanding of Doug, and Doug realizes that he is using Andy. Furthermore, Doug and Andy start to fall in love, upsetting Doug’s carefully planned future. Doug starts out with a single purpose–to make money to build his hotel. Still, we see he has a big heart as he takes up for a co-worker who is about to be fired and patches up a marriage on the brink of collapse.

Michael J. Fox, who plays Doug, contributes his boyish charm to this funny, light movie. There is no sex, nudity or violence in FOR LOVE OR MONEY, but Andy does wear very tight, clinging clothes. Ironically, the villain is named “Christian.” Is this a subtle slur or coincidence? It is particularly disappointing and unusual for a PG movie to have as many obscenities and profanities as this one. No doubt families expecting light entertainment will be offended by the language.