INDIANA JONES AND THE LAST CRUSADE

"An Exciting, Sacred Encounter with Faith and the Living Christ" 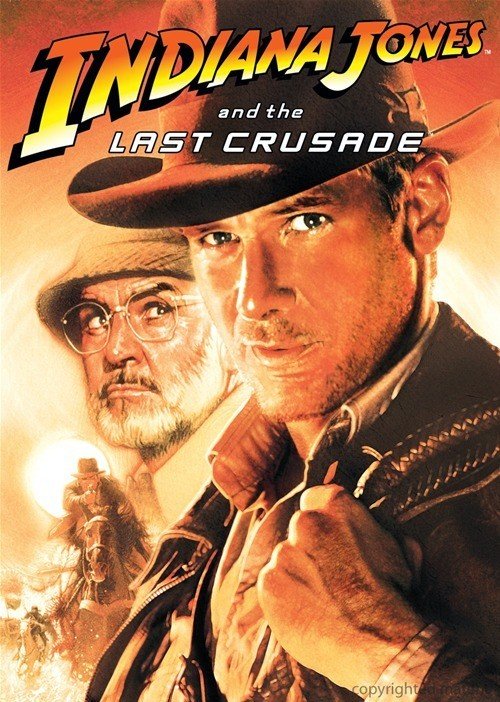 INDIANA JONES AND THE LAST CRUSADE is the third installment of George Lucas and Steve Spielberg’s mega-hit franchise. THE LAST CRUSADE features the return of daring archaeologist Indiana Jones and introduces his father, Dr. Henry Jones, played wonderfully by Sean Connery. A prologue adventure shows Indy’s father preoccupied with finding the Holy Grail, the chalice Jesus used at the Last Supper. Years later, a wealthy man hires Indy to find the Holy Grail. However, Indy doesn’t know that the man is working for Hitler’s National Socialists. Nor does he know that the Nazis are holding his father against his will.

THE LAST CRUSADE gives moviegoers non-stop action, high adventure, cliff-hanging excitement, globe trotting locations, and light humor throughout. The finished product is a smashing success and thoroughly entertaining from start to finish. Best of all, the movie glorifies God, faith, and even Jesus Christ. It’s also a great father-son adventure and includes a scene overtly rebuking profanity and blasphemy. There are some incidental crudities and scary, violent content that warrant caution for younger children. Otherwise, however, MOVIEGUIDE® heartily commends INDIANA JONES AND THE LAST CRUSADE.

(CCC, BBB, L, VV, S, A, M) Very strong Christian, moral worldview with many references to Jesus, the Cross, the Holy Grail, faith, respecting faith, a sharp rebuke of profanities misusing Jesus Christ’s name, good triumphing over evil; a few light obscenities and a few profanities, with a harsh rebuke of such language, some crudities, and people encounter some rats swimming in a sewer and people rob grave; plenty of exciting, strong action violence such as motorcycle chase, narrow escapes, explosions, man riding horse tries to rescue father and friends being held hostage in a German tank, character turns to dust, plane tries to shoot people riding in car, plane crashes after birds smash into window, boy falls into crate full of snakes, boy uses whip and cuts his chinm on it to the extent that it will leave a scar on his chin, men chase after boy who has sacred cross said to belong to Coronado the conquistador, men chase boy on top of train, man recovers corss on ship during a terrible storm, and man hides among Nazi rally and encounters Hitler himself but escapes, boat race, fighting; implied fornication between “hero” and damsel; no nudity; alcohol use; no smoking or drugs; and, betrayal, grave robbing.

THE LAST CRUSADE features the return of daring archaeologist Indiana Jones and introduces viewers to his father, Dr. Henry Jones (played wonderfully by Sean Connery). Unlike the last dark episode, THE TEMPLE OF DOOM, this one follows the successful, up-beat, adventure formula of the original RAIDERS OF THE LOST ARK. It gives moviegoers non-stop action, high adventure, cliff-hanging situations, giant globe trotting locations, and light humor throughout. The finished product is a smashing success and thoroughly entertaining from start to finish.

In LAST CRUSADE, Jones is an archaeologist traveling to find artifacts and risking life and limb to keep these valuable “finds” in museums and out of the hands of greedy, power-hungry individuals. The quintessential bad guy Adolf Hitler and his evil National Socialist (Nazi) henchmen are back, seeking, along with Indy, the Holy Grail, or chalice used by Christ at the Last Supper. In RAIDERS, they pursued the Ark of the Covenant, which was protected by God, just as the chalice is in THE LAST CRUSADE. This is part of Lucas and Spielberg’s formula for the success of this franchise. Frame by frame, THE LAST CRUSADE works as a vastly entertaining adventure.

TEMPLE OF DOOM, regrettably, didn’t contain this formula, despite a couple good points, such as the rescue of children from dark occult forces.

“I wasn’t happy with the second film at all,” says Spielberg. “It was too dark, too subterranean, and much too horrific. I thought it out-poltered POLTERGEIST.” He adds, “There’s not an ounce of my own personal feeling in TEMPLE OF DOOM.” In a recent interview, both Lucas and Spielberg noted that one reason TEMPLE OF DOOM was so dark was that both men were just coming off of a divorce. Imagine that!

Undeniable joy, however, in this episode emanates from the warming presence of Sean Connery as Indy’s father. As an archaeologist himself, Dr. Jones leaves everyone for his lifelong goal to discover the chalice used by Christ. When kidnapped by the Nazis for that very reason, the discovery of the chalice now becomes all-important to Indy, for on that path will he locate his kidnapped father.

The bond between father and son in THE LAST CRUSADE is inspiring, and offers for the film its most important message. Indy and his Dad are family. They know each other well and respect each other, despite their differences.

In one very powerful and moving scene, Indy utters a profanity by misusing Jesus Christ’s name. His Dad abruptly and forcefully slaps him across the face, emphatically stating, “That’s for blasphemy!” No further blasphemy is used. The scene is absolutely exhilarating, and it’s especially gratifying to see the filmmakers honoring the faith held by Christians. (When the film was screened, reviewers walked out of the theater commenting that they didn’t know that misusing Jesus’ Name was blasphemy or profanity. This not only shows how far our public “education” system has fallen, but also how far the “Christian Church” has fallen!)

Sean Connery’s appearance in THE LAST CRUSADE contains some insider’s irony. Lucas and Spielberg have deliberately patterned their Indiana Jones movies after the James Bond movies that made Connery famous. Albeit designed to be more family friendly than James Bond, they always contain a prologue adventure that later on becomes important for the adventure in the rest of the movie. In a sense, therefore, casting Connery as the benevolent father of Indiana Jones serves as a great, uplifting, and perfectly fitting capstone to one of the best movie star careers ever. Both Connery and Harrison Ford are both truly movie stars of the first magnitude.

The story in INDIANA JONES AND THE LAST CRUSADE overtly, and frequently, shows respect for God and respect for the things He holds as important. Ultimately, it also glorifies the concept of God as well as faith, specifically faith in Jesus Christ, as well as the Biblical commandment to honor thy father and thy mother. Just as RAIDERS OF THE LOST ARK touched on the power and holiness of God, THE LAST CRUSADE touches on the power and holiness of Christ (although theologically, there are obvious holes). Those journeying to Jesus Christ come from all directions, but the journey from Christ comes from the One True God.

MOVIEGUIDE® heartily commends INDIANA JONES AND THE LAST CRUSADE. There are, however, some incidental crudities and some scary action-oriented violence and scenes. This content warrants caution for children, especially younger children. That said, the blasphemy rebuke scene is reason enough to see this exciting, redemptive, and inspiring adventure.

RECOMMENDED ACTION: Please write Paramount Pictures to thank them for making a good, dynamic father/son picture, and to express gratitude for honoring to a great degree the Christian faith:

Also, pray that those who see INDIANA JONES AND THE LAST CRUSADE will come to know Jesus Christ in Spirit and in Truth.