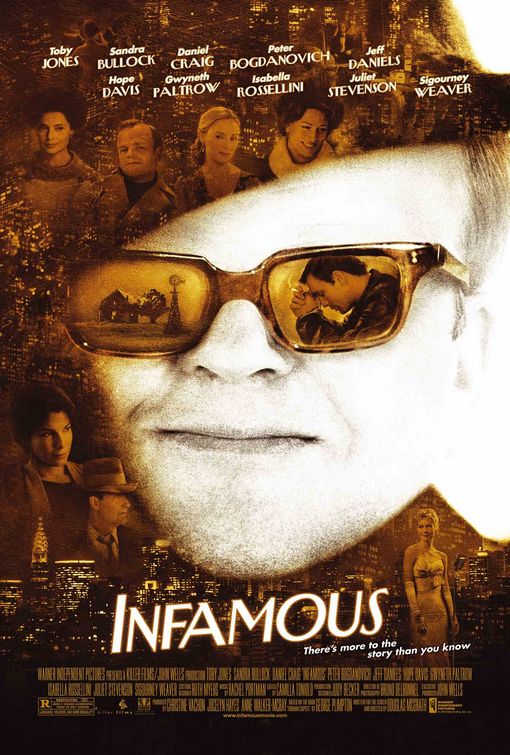 INFAMOUS is the second movie about homosexual author Truman Capote's investigation into four brutal Kansas murders that led to the Pulitzer Prize-winning book IN COLD BLOOD. INFAMOUS leads off with a brief intro of Truman Capote's effeminate personality and high-pitched child's voice. Despite his bizarre voice, Capote was able to captivate crowds with his storytelling abilities and wry, often sarcastic and cruel, wit. INFAMOUS shows Capote, played by Toby Jones, as being a master of getting and spreading gossip. Capote travels to Kansas with his childhood friend Nelle Harper Lee (played by Sandra Bullock), the author of TO KILL A MOCKINGBIRD. They're off to investigate the murders of the Clutter family. Capote ingratiates himself with the townspeople, but falls in love with one of the brutal killers, Perry Smith.

INFAMOUS is not as well done as the earlier movie. The actors do a good job but do not match the high standards of CAPOTE. The personal psychology of the characters is not as convincing. Along with plenty of foul language, graphic violence and depicted homosexual behavior, INFAMOUS has a Romantic worldview with a very strong, politically correct view of homosexuality and killers.

(RoRo, PCPCPC, HoHoHo, AP, B, LLL, VVV, SS, N, A, D, MMM) Strong Romantic worldview with very strong, politically correct view of homosexuality and opposition to the Death Penalty for infamous murderers, plus some brief talk against American society and Americans and references to Psalm 23 as killers are executed; at least 42 mostly strong obscenities (including many "f" words and some crude sexual obscenities), one strong profanity and five light profanities; very strong violence with some blood includes shotgun murder, man's throat is slit, two other implied shotgun murders, discussion of two suicides, fighting, and angry man viciously grabs another man and stuffs rag in his mouth and threatens sodomy but no sodomy rape occurs; depicted heterosexual fornication in one scene, depicted homosexual kiss, man stops rape of teenage girl, angry man grabs another man and appears to threaten him with sodomy rape but that's not his intent, and some crude sexual references, including homosexual ones; upper female nudity in one sex scene and shots of upper male nudity; alcohol use; smoking; and, gossiping, lying, robbery, manipulation, jealousy, and author rewrites truth to make it sound better, but he is rebuked by his oldest friend (He ignores her rebukes, however, and does it anyway).

INFAMOUS is another movie about homosexual author Truman Capote’s investigation into four brutal murders in Kansas that led to Capote’s Pulitzer Prize winning book IN COLD BLOOD. The book helped lead to the Supreme Court’s ruling against the death penalty, which was eventually overturned. The movie is laced with fictional interviews with Capote’s friends in New York.

Like the previous movie, which was simply called CAPOTE, INFAMOUS leads off with a brief intro of Truman Capote’s effeminate personality and high-pitched child’s voice. Despite his bizarre voice, Capote was able to captivate crowds with his storytelling abilities and wry, often sarcastic and cruel, humor. INFAMOUS shows Capote, played by Toby Jones here, as being a master of getting and spreading gossip.

Capote travels to Kansas with his childhood friend Nelle Harper Lee (played by Sandra Bullock), the author of TO KILL A MOCKINGBIRD. They’re off to investigate the murders of the Clutter family for an article. At first, the townspeople and the police chief are put off by Capote’s flamboyant nature and his silly-looking outfits. He tones down his outfits, but they still shun him, until they learn that he’s worked with many Hollywood celebrities, including Humphrey Bogart and Marilyn Monroe. Capote decides that his material on the murders would make a great book, not just a great article. In writing the book, he wants to apply fictional storytelling techniques to a factual story.

Then the two killers, Dick Hickock (Lee Pace) and Perry Smith (Daniel Craig), are caught, and Capote changes the focus of his book. Dick is anxious to tell his story, but Perry is reluctant. Perry pictures himself as an artistic type and is upset by an allegedly vicious interview article that Capote did with Marlon Brando, one of Perry’s heroes. It turns out, however, that Perry and Capote have much in common, including Perry’s latent homosexuality and the suicides of their respective mothers. The question then becomes, does Capote fall in love with Perry or is he just exploiting Perry in order to finish his explosive book?

INFAMOUS has a more entertaining, though shallow, beginning, but it is not as well done as the earlier movie. The actors do a good job, but they all do not quite match the high standards of CAPOTE. The personal psychology of the characters is not as convincing, either, though the townsfolk’s obvious interest in Capote’s celebrity stories is, even though it makes the people in Middle America appear somewhat shallow at times.

The Capote in INFAMOUS is more conflicted than the Capote in the earlier movie. Thus, INFAMOUS suggests that, while the execution of the two killers would be a great conclusion to his book, Capote’s personal feelings for Perry stand in the way. In that way, INFAMOUS becomes more of a politically correct excuse for Perry and Capote’s homosexuality. The movie even suggests that Perry murdered the Clutter patriarch and his son because Dick mocked Perry’s alleged homosexual feelings for the two men and goaded Perry into killing them. Thus, homophobia is partly to blame for the brutal deaths of this family, not the perverted sexual desires of the two vicious killers (Richard wanted to rape the daughter, the movie says, but Perry wouldn’t let him).

The politically correct Romantic worldview of INFAMOUS ultimately is abhorrent, no matter how artistic the worldview is presented. Not only does it promote homosexuality, it also often makes a joke out of people’s interest in the gossip that Capote likes to dish out. Finally, the movie also seems to be against the death penalty, even for vicious murderers.

Overall, INFAMOUS is a more sympathetic portrait of both Capote and Perry Smith than the previous movie about this subject. As such, it offers viewers a Romantic, politically correct view of homosexuality and brutal murderers on Death Row. Although both movies eventually neglect the crime victims, INFAMOUS comes to immoral conclusions that are reflected by its Romantic worldview. The Clutters, the family that was murdered, deserve better.