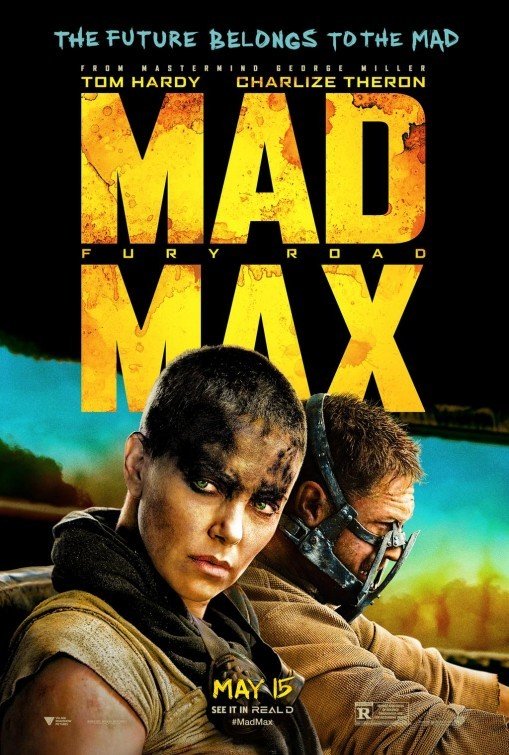 MAD MAX: FURY ROAD is a reboot of the ROAD WARRIOR movies with Mel Gibson. It’s set in a violent post-apocalyptic world where vast environmental destruction has occurred and evil men prey upon the weak. After his wife and daughter are killed, an ex-policeman named Max is forced to fend for himself in the wilderness. An evil warlord and his gang kidnap Max to use him as a universal blood donor. Max escapes and teams up with a woman trying to free the women captured by the warlord and used as breeders for him and his men.

MAD MAX: FURY ROAD is thrilling throughout, with a poignant story about a haunted hero who finds meaning and morality again by helping others. It has a strong Christian, redemptive worldview, with many redemptive images and symbols of sacrifice, death and resurrection, and baptism reflecting Jesus Christ’s comments about “fountains of living water” to the woman at the well in John 4:14. Extreme caution is still advised for MAD MAX: FURY ROAD because of intense action violence, some grotesque images, one “f” word, brief graphic violence, and light politically correct elements.

(CC, BBB, Pa, FR, PC, E, Acap, L, VVV, S, N, MM) Strong Christian, redemptive worldview where hero haunted by the death of his wife and child finds meaning and morality again by helping others (including victims and people tempted by evil), set in a violent, cruel post-apocalyptic world, with many Christian symbols of finding a savior (a “universal donor”) who offers his blood for a transfusion to save main heroine’s life, sacrifice, images of death and resurrection and baptism, images of fountains of water saving people, with some pagan references to Valhalla (but it’s clear that the Valhalla being sought after is a false one that tempts people to commit suicide and that values death, not redemption) and some light politically correct environmentalism and anti-capitalism, plus woman says “I’m praying. . . to whoever will listen”; one “f” word with a couple light obscenities or vulgarities; brief very strong and lots of strong, intense, nearly relentless action violence, consisting mostly of constant chases between souped-up cars and trucks decked out as hyper-inventive killing machines operated by all types of horrifying people who race each other and fight to the death over water and gas, using all manner of heavy and sharp objects to pummel each other into submission or cut each other to pieces, or throw and knock each other off speeding vehicles to be left to die in the desert, with occasional moments of graphic bloodshed such as a shot of villain’s face after part of it has been torn off, plus numerous fistfights, kick fights, explosions, flipped vehicles and other mayhem; villain uses women as “breeders” for his children but hero helps free them; upper male nudity and obscured female nudity from a distance as woman tries to entice visitors into traps and skimp female clothing, but nothing explicit really shown; no alcohol; no smoking or drugs; and, people kidnapped and held prisoner by villains, plus some references to collecting breast milk for babies.

MAD MAX: FURY ROAD is a post-apocalyptic science fiction thriller about a former policeman haunted by the loss of his family who’s forced to fend for himself in the wastelands of Australia at all costs until he finds meaning in saving a group of women from the savagery of an evil warlord exploiting them and other people. FURY ROAD is thrilling from start to finish and has a strong Christian, redemptive worldview of goodness overcoming demonic evil, but there is one “f” word, intense action violence, brief graphic violence, and light politically correct elements, so strong caution is advised.

The movie’s story is incredibly simplistic, especially in the first half. Opening narration by the protagonist Mad Max (Tom Hardy) reveals that he’s a former policeman whose life was upended amid violent anarchy as the world ran out of resources and riots. He’s captured by an ugly, evil gang in the opening scenes and tattooed as a “Universal Donor” blood type, to be treated as a debased, subhuman “blood bag” serving only to supply the needs of other men in the chases and battles over resources.

Max has horrifying flashbacks to a young girl who must be presumed to be his daughter, as well as others who say he left them to die. After a battle among vehicles that takes seemingly a half-hour of screen time, a huge dust storm hits everyone involved and Max makes his escape. He finds a woman named Furiosa (Charlize Theron), a former heir to the rulers of the territory who now leads a gang of her own and is rescuing young “breeder” women from the evil war lord’s control.

With her truck disabled after a battle, and no truck of his own, Max and Furiosa begrudgingly team up in search of a barely-remembered nicer territory to live. As each strives to selflessly save the other women and an unborn child in one woman’s womb, they engage in one final relentless race to reclaim the territory from the evil warlord and give people hope again.

MAD MAX: FURY ROAD is thrilling from start to finish, with a poignant story about a haunted hero who finds meaning and morality again by helping others and sacrificing himself for them. It has a strong Christian, redemptive worldview, with many redemptive images and symbols of sacrifice, death and resurrection, and baptism scenes reflecting Jesus Christ’s comments about “fountains of living water” to the woman at the well in John 4:14. Extreme caution is still advised for MAD MAX: FURY ROAD because of intense action violence, some grotesque images, one “f” word, brief graphic violence, and light politically correct elements.