"Whom Do You Serve?" 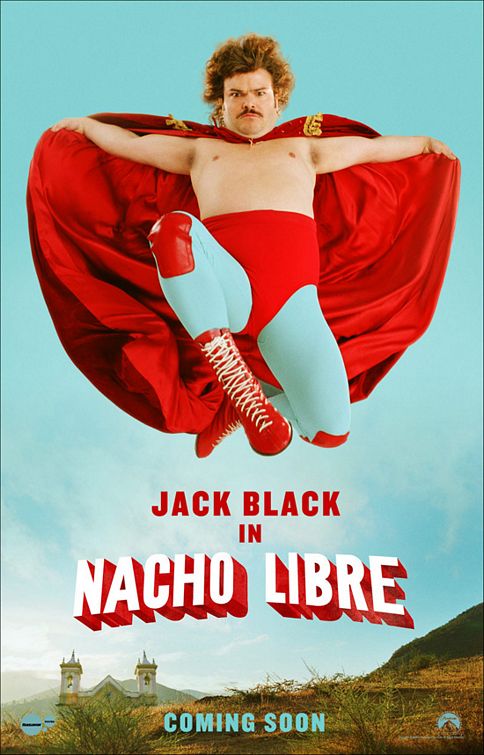 NACHO LIBRE stars Jack Black as Ignacio, an orphaned boy in a Mexican monastery who dreams of glory in the wrestling ring but is convinced by the monks to become a monk. As an adult, Ignacio still dreams of being a wrestler. He's also upset that the other monks have relegated him to the kitchen. Things get more complicated when a pretty nun named Encarnación becomes the teacher for the orphan boys. Ignacio tries to woo Encarnación toward marriage while he comically tries to establish a career as a masked wrestler, but she resists.

NACHO LIBRE is sometimes very funny, mostly because of the quirky talents of Jack Black, who mugs and cavorts his way throughout the movie. NACHO LIBRE could be better, however, and will not suit everyone's taste. The movie flirts with sacrilege and crosses the line at least once, but contains strong Christian content, including a positive ending. The movie is usually not overtly lewd, but it does take some risks regarding its unrequited romance. For example, Ignacio tries to use his muscles to attract the nun's interest. They apparently keep their vows to serve God, however.

(Pa, CC, BB, Ab, H, O, VV, S, N, M) Mixed pagan worldview with some strong Christian content/premise and moral values (including positive prayer and references to Christian faith as well as comic hero helps orphanage and woman tells hero to "fight for something noble or someone who needs your help"), but set in a comedic, slightly satirical, goofy, borderline, and (sometimes) possibly sacrilegious sacrilegious, anti-Christian, but comical, way that may turn off some Roman Catholics and other Christians, including a goofy portrayal of an orphaned boy dreaming of glory as a Mexican wrestler but who is forced to become a celibate monk and has romantic attraction to a young nun, but the nun rebuffs his attention and they keep their vows, plus humanist sidekick character believes in science, not God, but he offers to and actually leads a prayer to God with the protagonist before the big wrestling match at the end, plus occult reference to the "magic" in an eagle egg, which does not work; strong violence includes lots of slapstick violence such as monk's robe catches fire accidentally and lots of wrestling violence such as kicks, punches and throws, often in a comic vein; no foul language, but some scenes with passing gas, man exits toilet stalls a couple times, and one scene with apparent animal manure; no sex scenes but very light sexual elements such as chubby woman ogles and chases thin man, and two celibate monks are attracted to pretty young nun, mostly in innocent ways, though one monk tries to get the nun to admire his body by showing off the muscled buttocks and by arranging for a fight where he can rip off his shirt, but everyone remains celibate in the end, though a final shot lightly suggests that the protagonist monk may still be having some difficulty with remaining a celibate monk, plus lyrics in song over the end credits talks about "forbidden nectar" and the "muscles of my love," referring to the nun and the protagonist monk; upper male nudity in wrestling scenes and somewhat lustful monk shows off the muscled buttocks under his pants to nun, but nothing really happens romantically; no alcohol use; no smoking; and, selfishness somewhat rebuked, light jokes about life in a Roman Catholic monastery, monk prays before big wrestling match but is inspired when the nun comes to see him wrestle, magic does not work, and protagonist finds the glory he seeks but gives most of his winnings at wrestling matches to help feed nun, monks and orphans at a Roman Catholic monastery as well as buy a bus so they can take field trips.

NACHO LIBRE, the new comedy from Jack Black and the director of NAPOLEON DYNAMITE, is a strange movie that’s liable to offend some people at the same time that it tickles their funny bones. Set in a Roman Catholic monastery for orphans and, at the same time, in the world of Mexican wrestling, the movie flirts with sacrilegious material while it delivers goofy laughs from Jack Black’s quirky interpretation of a monk with a divided heart.

Jack Black plays Ignacio, an orphaned boy in a Mexican monastery who dreams of glory in the wrestling ring but is convinced by the monks to become a monk. Problem is, when Ignacio (also known as “Nacho”) becomes an adult, he still dreams of becoming a famous Mexican wrestler. He also is upset that the other monks have relegated him to the kitchen. Things get more complicated when a pretty young nun named Encarnación becomes the new teacher for the current orphan boys.

While Ignacio searches for a way to become a famous masked wrestler, he competes for Encarnación’s attentions with another monk. At one point, Ignacio tells her in a letter that he has dreams of leaving the monastery with her so they can get married and have children. Encarnación holds Ignacio at bay, however. Also, when Ignacio’s troubled wrestling exploits become known, she expresses disapproval of his efforts, even though he uses most of his winnings to help feed the orphans, the monks and her at the monastery. Eventually, she inspires Ignacio by telling him to “fight for something noble or someone who needs your help” and by showing up at the big wrestling match with the young orphan boys, who think of Ignacio as their hero.

NACHO LIBRE is sometimes very funny. This is mostly because of the quirky but appealing talents of Jack Black, who mugs, struts, dances, and cavorts his way throughout much of the movie. The movie could be better, however, and is not something that will suit everyone’s taste, especially people who hate goofy comedies rated only PG or those who don’t find Jack Black’s shtick to their liking.

The movie is usually not overtly lewd, but it does take some risks regarding the unrequited romance between its monkish hero and the pretty young nun. At one point, Ignacio tries to attract Encarnación by showing off his flabby muscles and getting into a fight. This scene may contain the movie’s most offensive moment.

Thus, NACHO LIBRE flirts with sacrilegious material by finding comedy in a Christian, Roman Catholic setting. Some people may feel, therefore, that it crosses the line.

On the other hand, the movie has strong Christian content. Ignacio argues with his sidekick, who says he believes in science rather than God. At the end, the sidekick suggests to Ignacio that they should pray before Ignacio’s climactic match with the Number One wrestler. There is no conversion scene here, but viewers do get to see the skeptical sidekick actually leading the whole prayer. Also, Ignacio uses most of his wrestling income throughout the movie to help the orphans. The movie also criticizes celebrities who treat their fans badly, especially their young fans. Ignacio becomes a positive hero to the children when he battles the mean wrestler, who is the Number One celebrity around the countryside.

Ultimately, therefore, though it flirts with sacrilege, and perhaps crosses the line, NACHO LIBRE has a mixed worldview with strong Christian content and moral elements to go along with its borderline, problematic content. At the end, Ignacio and Encarnación apparently keep their vows and continue to serve God while helping the orphans. Thus, in asking the question, Whom Do You Serve? (albeit in a comical fashion), NACHO LIBRE sides with Encarnación, who tells Ignacio that he should serve God by fighting for “something noble or someone who needs your help.”

Jack Black is very popular with children, so parents may need to take extra caution with this movie’s problematic content. Asking children and teenagers questions about Ignacio’s faith, the idea of making a vow to God and the skeptical sidekick’s prayer might be a good way to relate the truth of the Gospel of Jesus Christ to the movie’s story and subplots.