SO I MARRIED AN AXE MURDERER 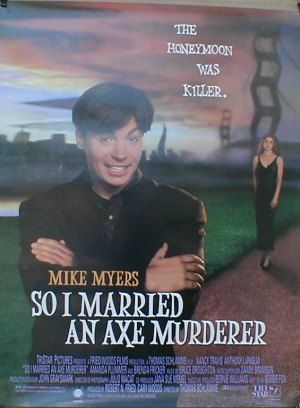 SO I MARRIED AN AXE MURDERER registers a mere two out of ten in the comedy thriller category. In the movie, Charlie Mackenzie (Mike Myers) thinks he has found a perfect mate when he meets Harriet (Nancy Travis). Charlie recites poetry at a coffeehouse in the Beat Poets’ section of San Francisco. However, Charlie’s ineffective renderings only add to a deficient plot. Shortly, Charlie meets a beautiful butcher named Harriet, and they fall in love. Then, evidence turns up hinting that Harriet may have killed three other men. Another twist develops when someone confesses to the murders, and so the two marry. Then, as they are wined and dined, Charlie receives a phone call from a police friend who tells him that the woman who confessed is crazy, and the evidence again points to Harriet.

The problem with SO I MARRIED AN AXE MURDERER is the mechanical story line along with Myers’ uneven acting performance. He does a creditable job in the movie, however, playing his own Scottish father, and Nancy Travis makes the most of the weak script in her role as Harriet. Cameo appearances by Steven Wright, Charles Grodin and Michael Richards also help put some spark in the otherwise confusing, lackluster film burdened by partial nudity, foul language and sexual innuendo.

Watch SO I MARRIED AN AXE MURDERER: