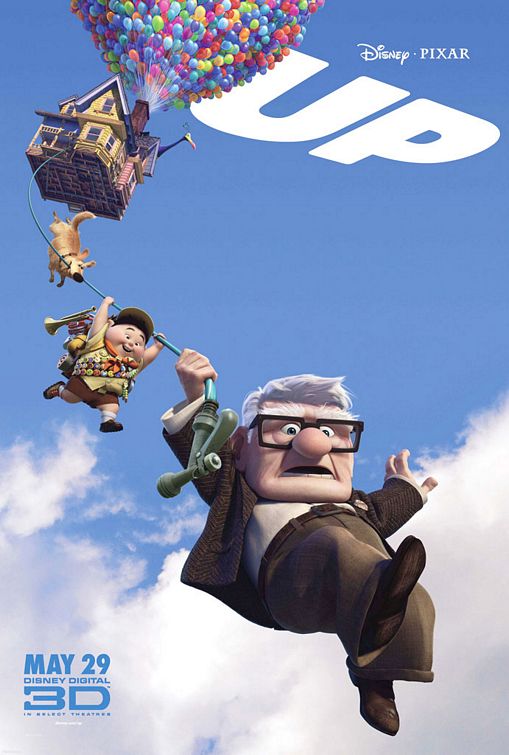 UP, the fun-filled, exciting animated feature from Pixar and Disney, is about 78-year-old Carl, who decides to fulfill his wife’s lifelong dream to go to Paradise Falls in the remote Venezuelan jungle plateau when the government wants him to vacate his home. He turns his house into a blimp with hundreds of helium-filled balloons. In the air, Carl is surprised by a fellow traveler – young Russell, an exuberant boy scout who wants to get his final scouting badge, for assisting the elderly. Carl tries to drop Russell back on the ground, but Providence intervenes. They are whisked away to Paradise Falls, where they find the adventure of a lifetime. They also may just lose their old lives!

UP is terrific! It’s full of crazy hilarity, hairbreadth escapes, enchanting characters, thrilling suspense, brilliant wit, and incredibly touching, poignant moments. There’s a floating house, a giant bird that craves chocolate, a villain who’ll stop at nothing, exciting chase scenes, and a snarling pack of talking dogs! UP is one of the funniest, emotional animated movies ever. Best of all, it’s another heartfelt, family-friendly animated classic from the wonderful team at Pixar and Disney.

(CCC, BBB, V, M) Very strong Christian, moral worldview promoting letting go of your sins and burdens to find new life, loving and caring relationships, heroic action, sacrifice to help others, marriage, and other Christian, biblical values, with references to getting married in a church, having a funeral in a church and an afterlife in Heaven; no foul language but a couple of “darn” words; light action cartoon violence such as child and animals in peril, a scary thunderstorm, snarling leader of a pack of dogs whose frightfulness is undercut by some very funny comedy, dogs chase giant bird, dogs chase characters, dog bites bird’s leg, villain tries to kill protagonist with a sword, villain chases protagonist and his new friend, characters in danger of falling from great height, a villain is shown falling, villain and three of his canine minions try to shoot down floating house with boy in it, boy almost falls from open ramp of dirigible balloon, protagonist gets angry and injures a man with his cane, and characters often attached precariously to a hose which swings wildly at dangerous heights; no sex; no nudity; no alcohol; no smoking or drugs; and, light miscellaneous problems such as protagonist lies to send annoying boy on a wild goose chase, crotchety old man and boy’s sadness that his father has become too busy for boy’s scouting activities is not resolved.

A floating house. A crotchety old man. A young scout who hasn’t been camping. A giant bird that craves chocolate. Talking dogs!!!

These are just a few of the delightful ingredients to Pixar and Disney’s great new comedy adventure, UP, one of the most entertaining, hilarious and poignant animated features they’ve ever made (or anyone else for that matter).

The story starts in the 1930s. Little Carl Fredricksen meets precocious Ellie in a ramshackle, abandoned old house. They discover they are both big fans of the explorer Charles “Adventure is out there!” Muntz, but their hero has been disgraced and has disappeared in the jungle mountaintop of Paradise Falls in Venezuela to find proof of a giant bird he believes exists. Ellie and Carl plan to go there someday to explore.

[Warning – possible spoilers follow] A lovely montage shows that Carl and Ellie grow up and fall in love. They get married and rebuild the ramshackle old house where they pretended to go on great adventures together as children. They keep saving for their trip to Paradise Falls, but every time they get ahead, something happens. Like a flat tire. Or a broken leg. Before they know it, they are getting old, past middle age. Carl finally decides to go ahead and buy airplane tickets to Venezuela, but Ellie suddenly gets deathly ill and passes away.

Cut to elderly Carl still living in their house. He is surrounded by the massive construction of a bunch of skyscrapers. He refuses to sell their beloved house to the developer.

One day, Russell, a young Wilderness Explorer knocks on Carl’s door. All Russell needs is one more badge to become a Senior Wilderness Explorer, a badge showing that he has assisted an elderly person. Carl can’t be bothered, however, so he sends Russell on a wild goose chase – to capture an annoying bird that does not exist, a snipe.

Then, another bad thing happens. One of the construction men has accidentally nearly broken the beloved mailbox that Carl built with his wife Ellie. When the man tries to fix it, Carl hits him with his cane, causing the man’s head to bleed. The judge sentences Carl to the local retirement home.

Instead of going, Carl attaches hundreds of helium-filled balloons to the chimney of his house. He plans to fly to Paradise Falls and fulfill the dream that inspired he and his beloved Ellie. Once high in the air, he discovers that Russell was under the porch looking for the snipe. It looked strangely like a mouse, Russell says.

Carl tries to drop Russell back on the ground and take off again, but Providence intervenes and they are whisked to Paradise Falls, where they find the adventure of a lifetime. They also may just lose their lives in the process!

UP is a terrific movie full of crazy hilarity, hairbreadth escapes, enchanting characters, thrilling suspense, brilliant wit, and incredibly poignant, touching moments that remind one of the most heartfelt moments in one’s favorite movies. In fact, UP has one of the most adorable, winsome and extraordinarily tender openings ever seen in a movie. And, did we mention that there are talking dogs?

UP is also one of the funniest animated movies ever made. There are a couple moments in this movie that are so funny that the laughter in the audience drowned out the dialogue for almost a minute, or maybe more. There are also a few jokes that are laugh-out-loud hilarious, very clever and even totally unexpected.

Like every Pixar movie, UP breaks new ground. Instead of seeking photorealism, UP has an intentional symbolist style that is reminiscent of Antoine de Saint-Exupery classic tale of THE LITTLE PRINCE.

Furthermore, like the MISSION, it has a clear allegory of letting go of your burdens and sins so you can accept the gift of new life. In many ways, Carl is born again when he lets go and crosses his heart.

Pete Docter and Bob Peterson have written a great script that’s beautifully directed by Docter, with help from Peterson as co-director. They’ve been associated with many other Pixar movies, but especially with the TOY STORY movies, MONSTERS INC. and FINDING NEMO.

Best of all, UP is another family-friendly classic movie from the magnificent team at Pixar and Disney. Ultimately, its message is that the best, most wonderful adventures we have are the ones we find with the people we love.

Pixar is at the top of its game here. Even when it ventures into situations that might be too scary or too intense for younger children, such as a pack of snarling (and talking) dogs or a villain trying to shoot down Carl’s house with Russell in it, the Pixar filmmakers show great taste and creativity by undercutting and relieving the moment with hilarious comedy or a heartfelt action.

All that said, UP is not absolutely perfect. At one point, Russell mentions to Carl that his father has become too busy to go to every one of Russell’s Wilderness Explorer meetings, or to take him camping. This plot point is not resolved, but it easily could have been, without making the movie seem overlong. Apparently, the filmmakers felt that doing this might take away from the relationship the movie is building between Russell and his new friend, Carl.

Also, some critics or viewers may think that the movie’s action-filled third act is slightly too frenetic or goes on slightly too long. This is a very minor, highly debatable flaw, however.

The good news is that there will probably not be a more entertaining, more heartfelt, more exciting, more creative, or funnier movie than UP this year. It has almost everything anyone could possibly want to see when they spend their hard-earned bucks at the local multiplex. And, did we mention that it has talking dogs!?

Rent or Buy UP: