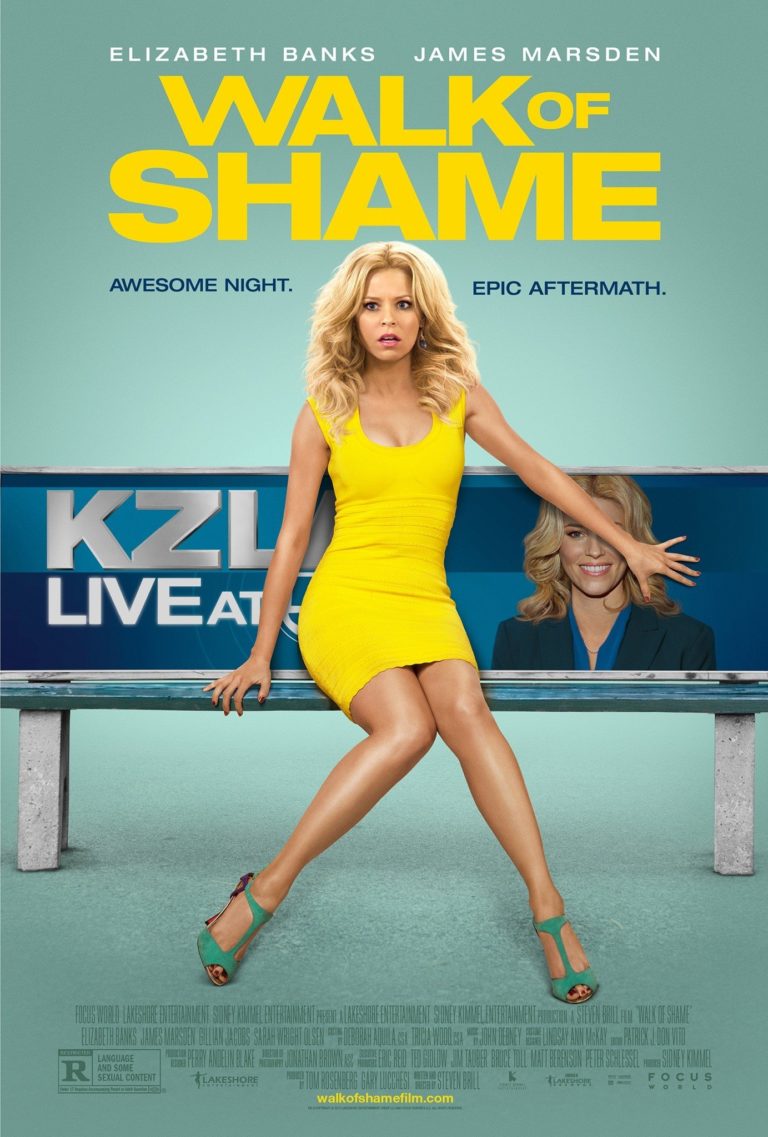 WALK OF SHAME is a comedy about Meghan, who’s finally up for a huge promotion to anchor the news at a national TV station. Everything she has done in her career is to get to this point. Her friends, Rose and Denise, decide to take her out to celebrate. The three get drunk, and Meghan goes home with the bartender, Gordon. Waking up in the middle of the night, Meghan listens to a voicemail saying she must perform the next day at the station to land the job. Leaving Gordon’s apartment, she has no phone, no car and no money. Comical misadventures follow.

The best part of WALK OF SHAME is the charming Elizabeth Bank, who plays Meghan. The rest of the movie falls short in the laugh department. WALK OF SHAME has a Romantic worldview. What starts off the plot is the main character getting drunk and going home with a man she just met. Later, she encounters drug deals, prostitutes, cocaine addicts, and gang members. WALK OF SHAME warrants extreme caution. It’s not a movie for teenagers, especially teenage girls.

(RoRo, PaPa, Ho, B, P, LLL, VV, SS, N, AA, DD, MM) Strong Romantic worldview, with messages of follow your heart, have fun and some hedonistic pagan content, plus brief homosexual references and some moral, positive content regarding police, though one policeman is kind of dumb; at least 75 obscenities (including 38 or so “f” words), seven strong profanities including use of Jesus, and 11 light profanities; light violence in comical situations includes woman shot at, woman chased by cop cars, woman pushes over young boy; strong sexual content overall includes implied fornication with couple that just met, kissing, multiple crude jokes that talk about sexual actions, one homosexual character has a very limited role, mentions of prostitutes, gentlemen’s club shown from the outside; upper male nudity with man in underwear, woman in underwear, woman in tight dress that makes people think she’s a prostitute; drinking and drunkenness at a club; smoking of an e cigarette, mentions of marijuana being smoked, woman ends up in cocaine house with a cocaine addict that gives her cocaine as a gift, and woman tries to sell cocaine back to a drug dealer to get $10 to go home; and, female protagonist steals young boy’s bike, steals some shoes, and tells some lies.

WALK OF SHAME is a comedy about a woman trying to land a job as a news anchor at a national television station who gets completely lost on her way to a trial run. Though competently produced, WALK OF SHAME contains a lot of cursing and crude jokes, so extreme caution is necessary.

Meghan is finally up for a huge promotion to anchor the news at a national television station. Everything she has done is to get to this point was in preparation for this career move. Her two friends, Rose and Denise, come over to help celebrate with her, but the truth is they won’t be celebrating. Meghan has just heard that another woman got the position. On top of that, her fiancé has broken up with her and even taken her dog.

The three women decide to go out to a club and drink away their sorrows. It’s not normal for Meghan to party, so she drinks too much and goes out the back door of the club to get some air. Once she closes the door, it locks but the bartender, Gordon, saves her. The two instantly connect, and Meghan decides to go home with Gordon.

Waking up in the middle of the night, Meghan wonders where she is and listens to her voicemail to find out she may have the position after all. All she has to do is show up to work and perform well for the station’s reps.

Meghan decides to leave Gordon’s place to get her car. She goes outside only to find her car is being towed, Gordon’s apartment complex is locked, and her purse is in her car. Seeing a cab, Meghan jumps in to go to the tow lot, but with a lot of confusion, the cab driver drives her to the wrong location, and she can’t pay him. One thing after another happens. Will Meghan get to the station in time to get the job?

WALK OF SHAME is a movie that will be forgotten soon. The best part is Elizabeth Banks’ charm as Meghan. The rest of the acting isn’t bad; it’s just that the movie falls short in the laugh department. In fact, most of the jokes are very crude, including places where the female protagonist is mistaken for a prostitute. Also, though competently produced, the movie is rather predictable.

Overall, WALK OF SHAME has a Romantic worldview. What starts off the plot is the main character getting drunk and going home with a man she just met. Later, she comically encounters drug deals, prostitutes, cocaine addicts, and gang members. At the end of the story, she realizes it’s too hard to be the good girl who appears perfect, so she decides she’s going to let down her guard. So, overall, WALK OF SHAME isn’t a good movie to show teenagers, especially teenage girls.