THE SONG OF NAMES

"Never Give Up on Your Friends" 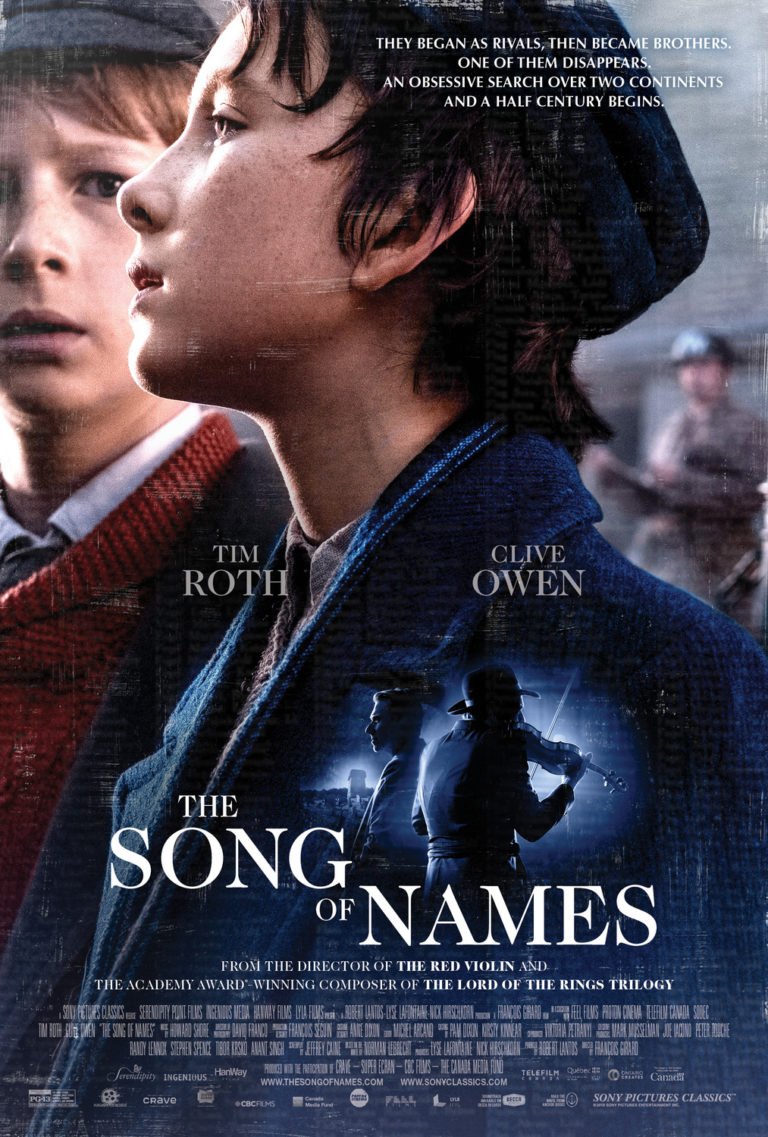 THE SONG OF NAMES is a period drama that stretches over the course of 35 years beginning in 1951. The movie follows Martin Simmonds who tries to find his childhood friend, Dovidl Rapoport. Dovidl disappeared before a concert in London in 1951. In 1986, Martin sees a young violinist repeat Dovidl’s good luck ritual. The young man gives Martin some leads that take him to Eastern Europe. Will Martin find his long-lost friend?

THE SONG OF NAMES is a captivating tale of never giving up on the people important to you. It’s filled with brilliant music that creates emotion at the right moments. The flashbacks keep the story moving and provide insight into understanding the story. THE SONG OF NAMES has a strong moral worldview with some Christian content. The movie stresses the importance of family, forgiveness and understanding. Christian symbols are scattered throughout, and characters have conversations about God’s involvement in loss. However, THE SONG OF NAMES has brief foul language, a lewd reference and a deck of playing cards with naked women pictured on them. MOVIEGUIDE® advises strong caution.

(BB, CC, L, VV, S, NN, A, D, M):
Dominant Worldview and Other Worldview Content/Elements:
Strong moral worldview with overt Christian elements stresses loving others, forgiveness, friendship, family, and reverence for the afterlife, Christian symbols scattered throughout and characters have conversations about God’s involvement in loss, several Jewish traditions shown that fit the setting and honor piety, and a character renounces his Jewish faith but then later returns to it
Foul Language:
Seven obscenities
Violence:
Children shoving and play fighting, depiction of a dead body in a bombed house with some blood, one man punches another man repeatedly in the face with some blood
Sex:
A mention about going to have sexual relations and two instances where a married couple kisses, a mention of going to have sex
Nudity:
Children use playing cards with naked women on them
Alcohol Use:
Some alcohol use
Smoking and/or Drug Use and Abuse:
Several instances of cigarette smoking, one of which was children smoking, but no drugs; and,
Miscellaneous Immorality:
Bribing money for answers, stealing milk, stealing from a bombed house.

THE SONG OF NAMES is a period drama that stretches over the course of 40 years beginning in 1939. The movie follows Martin Simmonds who tries to find his childhood friend, Dovidl [sic] Rapoport, who disappeared before a concert in London in 1951. THE SONG OF NAMES features exceptional music and the importance of family, forgiveness and understanding, but regrettably features some unnecessary foul language and other unsavory elements that require extreme caution.

THE SONG OF NAMES jumps back and forth chronologically 50 years between the late 1930s and the mid 1980s. The movie opens with Martin, an English teenager, and his family as they wait in the wings of a concert hall in London 1951. Dovidl Rapoport, a young Polish violinist and teenage friend of Martin’s, is set to perform. When he doesn’t show, Martin’s father is devastated because he’s put everything he has into Dovidl’s success on stage.

Cut to the mid 1980s. Martin is the judge at a talent contest. One of the young men does Dovidl’s good luck ritual before beginning to play his violin. Martin is overcome with great emotion remembering his friend.

Cut to Martin and Dovidl as children in a flashback. In 1939, Dovidl’s father brought him to the Simmonds house to keep him safe from the Germans as they prepare to invade Poland during WWII. Dovidl isn’t happy about leaving his family, but his father isn’t giving him much of a choice. Thankfully, Dovidl is in good hands with the Simmonds family as they accommodate his Jewish faith and traditions.

Cut back to modern day. After the talent contest, Martin gets in touch with the young man and his mother. The young man connects Martin with another man who gave him lessons. The man he meets tells him Dovidl gave him lessons years ago. He gives Martin some leads that take him to Eastern Europe. Before heading off to another country, Martin’s wife becomes frustrated with the journey and doesn’t understand why finding Dovidl is so important to Martin.

When Martin gets to Eastern Europe, he finds a woman who’s able to help him give him more direction in his quest to find Dovidl. Will it be enough to find his long-lost friend?

THE SONG OF NAMES is a captivating tale of never giving up on people who are important to you. The movie is filled with brilliant music that fills the audience with emotion at all the right times. Although the movie is full of flashbacks, they help keep the story moving and give the audience insight into understanding the story in greater detail.

THE SONG OF NAMES has a strong moral worldview with positive Christian elements. Family is the story’s main priority. The movie also has strong elements of forgiveness and friendship. The movie shows reverence for an afterlife. Also, Christian symbols scattered throughout, and characters have conversations about God’s involvement in loss. Finally, THE SONG OF NAMES showcases a good amount of Jewish traditions but regrettably features some brief foul language, a lewd reference and a deck of playing cards with naked women on them. MOVIEGUIDE® advises strong caution.