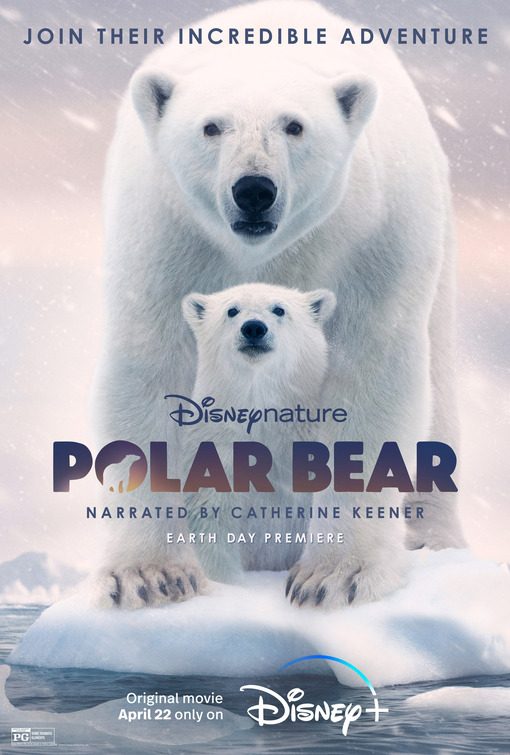 POLAR BEAR is a nature documentary streaming on Disney Plus. It follows the life of a mother bear through breathtaking landscapes in Arctic. The mother tells her life story beginning with her twin brother, mother and eventually her daughter. The movie begins during good times where there is an ample food and a healthy polar bear population. The cubs learn life skills from their mother. Mostly they play together. Within a few years, the polar ice caps melt to the degree that the polar bear population declines because of a food shortage.

POLAR BEAR is a political campaign posing as fact. The polar bear family’s struggles to survive on the melting ice caps are due to apocalyptic climate change. The documentary even concludes with a link to sign a climate change petition. The radical environmentalist worldview in POLAR BEAR is mitigated by some biblical, moral elements stressing family, the role of mothers as teachers, and being good stewards of the earth. Actually, the polar bear population has increased significantly since the 1950s, from a mere 5,000 bears to well over 21,000 bears.

(HH, PCPC, EE, B, V, MM):
Dominant Worldview and Other Worldview Content/Elements:
Strong humanist, politically correct, radical environmentalist worldview promotes apocalyptic climate change, mitigated by some biblical, moral elements stressing the gift of family, the role of mothers as teachers, and being good stewards of the earth
Foul Language:
No foul language
Violence:
Polar bears hunt other animals (including birds, seals and a walrus pup), and polar bears tear a dead whale apart and eat it
Sex:
No sex
Alcohol Use:
No alcohol use
Smoking and/or Drug Use and Abuse:
No smoking or drugs; and,
Miscellaneous Immorality:
Some fear mongering and misinformation, in order to push a politically correct, radical environmentalist agenda promoting a fallacious theory of apocalyptic climate change.

POLAR BEAR is a political campaign posing as a documentary about a polar bear and her family’s struggles to survive apocalyptic climate change on the melting ice caps. The documentary even concludes with a link to sign a climate change activist petition. There are some light biblical, moral elements on the gift of family, the role of mothers as teachers, and being good stewards of the earth. The majestic arctic scenery, and footage of an adorable family of polar bears interacting is calming and serene. Overall, POLAR BEAR is depressing, confusing and ultimately hopeless because of the repetitive exaggeration and fabrication of impending doom due to apocalyptic climate change. This movie is not recommended for most audiences.

POLAR BEAR follows the life of a mother bear through the breathtaking landscapes on the polar ice caps. The mother cub narrates flashbacks of her cub years with her twin brother, and mother. The adventure begins during good times where there is an ample food supply, and the polar population is healthy. The cubs watch their mother and learn how to hunt seals perched on the ice. The cubs’ only worries are related to the playful antics between brother and sister.

Within a few short years, the polar caps melt to the degree that the polar population declines because of a food shortage. The main food supply of seals is impeded upon because the seals don’t have as much ice to perch on (due to apocalyptic climate change), and the bears can’t capture the seals once they’re in the water. According to the movie, the bears are forced to wander for miles and miles in search of other food.

The polar bears continuously struggle under the repetitious circumstances of searching for food, and eventually finding a new food source. The polar bear’s twin brother cub dies. The mother leaves. The sister cub grows up and has a little cub of her own. She teaches the cub the lessons of survival her own mother taught her.

POLAR BEAR is a convoluted movie which gives the bears human characteristics, such as reason, feelings and abstract thoughts. The climate change belief is hammered through the confusing attempt to anthropomorphize polar bears. For example, the bear complains because the bears must swim great distances for food. Yet, polar bears are known for having the ability to swim continuously for days on end without a problem. Another assertion is that the polar bears can’s survive without their main food source, seals. However, the movie shows the polar bears eating a whale, birds, seaweed, and other mammals, disproving its own environmentalist arguments.

Assigning human feelings to a polar bear is problematic. Of course, it is cute to watch them play and snuggle within their family units. After all, a loving family is a human ideal. The push to give animals a human narrative falls apart when the polar bears take a newborn pup away from a walrus and eat it. Also, the male polar bears are predators to the cubs throughout most of the movie. The movie concludes with the melancholy polar bear lamenting over the near future of a world where polar bears won’t survive. Of course, the statistics on polar bears in the wild shows that the numbers of polar bears have increased spectacularly in the last 70 years, from 5,000 bears in the 1950s to 22,000 to 31,000 bears currently.

POLAR BEAR delivers on peaceful and captivating scenery. The bears are adorable and fun to watch in their habitat. Also, the movie does have some light biblical, moral elements on the gift of family, the role of mothers as teachers, and being good stewards of the earth. However, as noted above, the movie is marred with a repetitive, inaccurate narrative that serves a single political agenda, climate change. There is also some gross footage of bears tearing apart and eating a dead whale. The movie is not recommended for most audiences.