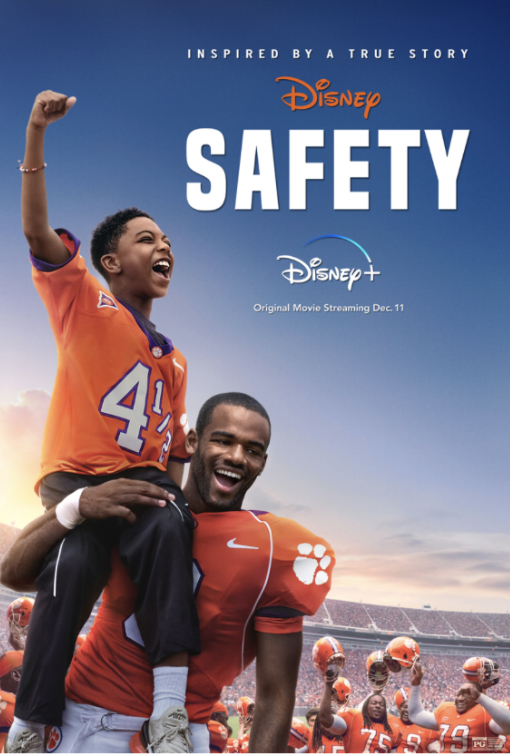 SAFETY is a heartrending, powerful, triumphant movie streaming on Disney Plus [Disney+]. Ray has a full football scholarship to Clemson, a football powerhouse in the NCAA. He’s also extremely bright. At first, Ray is overwhelmed by taking too many course credits as well as the football training. Then, when their mother is forced to go to rehab after being caught with some drugs, Ray decides to hide his little brother at Clemson. When this is discovered the football coach tries to help Ray, but an NCAA official intervenes.

SAFETY is an extremely powerful movie about a brother’s love for his little brother. It’s peppered with references to prayer and the school chaplain’s kindness. The ending includes a Christian song about the help God always provides. The passion and love of Ray’s teammates and his coaches are heartwarming, as is the love of Ray’s romantic interest. The movie’s jeopardy is intense, since viewers will think the little brother is going to be discovered or taken away from Ray at any instant. Like many sports dramas, SAFETY is a great movie for families to watch together.

(CC, BBB, V):
Dominant Worldview and Other Worldview Content/Elements:
Strong biblical, Christian worldview of being willing to give up your dreams to provide a home for your little brother with some mention of prayer, a kind collar-wearing priest, and powerful allegorical teamwork
Foul Language:
No noticeable foul language
Violence:
Football action violence (the usual pushing, tackling and body hitting)
Sex:
No sex but there’s some kissing and light dancing
Nudity:
No nudity
Alcohol Use:
No alcohol use
Smoking and/or Drug Use and Abuse:
No smoking or drug use, but boy’s mother goes into drug rehab; and,
Miscellaneous Immorality:
Lying but rebuked several times and violating NCAA rules of no gifts is stressed.

SAFETY is a heartrending, powerful, triumphant movie streaming on Disney+. It’s about a college football player’s love and sacrifice for his younger brother when their mother is incarcerated for drugs. SAFETY is produced by Mark Ciardi, who brought viewers THE ROOKIE, MIRACLE, THE GAME PLAN, INVINCIBLE, MCFARLAND, USA, SECRETARIAT, and many other great sports dramas that have won MOVIEGUIDE® Awards.

Ray has a full football scholarship to Clemson, a football powerhouse in the NCAA. He’s also extremely bright. The movie opens with the coach saying you must sacrifice everything to be a great football player. At first, Ray is overwhelmed by taking too many course credits in addition to the rigorous football training. When he arrives late to get his textbooks from the bookstore, after several futile missed attempts, a young coed named Kaycee opens the store to help him. Immediately, there’s a spark between them. However, in Psychology class, she answers a question with incomplete information, and Ray responds to the teacher by giving the teacher a brilliant, complete answer about addiction.

During this whole time, Ray’s little brother, Fahmarr or Fay, keeps calling Ray, and Ray keeps putting off the call. Finally, as he’s about to go to a party with Kaycee, he takes a call from Fey and finds out their mother has been arrested for possession of drugs. Ray gets on a bus immediately to go home, rescues Fay from a motel room that seems to be occupied by drug dealers, and then goes to the hearing for their mother.

The authorities decide to put their mother into treatment for 30 days and offer to put Fay into foster care. Ray decides to take Fay back to Clemson with him and try to hide him in his room. Several of his teammates help Ray hide his little brother. Eventually, of course, he gets caught, and all of the deception gets exposed.

The coach decides to help Ray and arranges for him to get an apartment for a cheap price in return to do all the handiwork to fix up the building. However, the NCAA representative reads the riot act to the coach and Ray. The NCAA official rules that Ray can’t accept any help, even a ride or a snack from anybody at Clemson or from any of the students.

SAFETY is an extremely powerful movie about a brother’s love and willingness to sacrifice for his brother. It’s peppered with references to prayer and the kindness of the school chaplain. Also, the ending has an overtly Christian song about the help that God always provides. The jeopardy in the movie is intense, because at every moment you think the little brother is going to be discovered, and the alternative is dire. The passion and love of Ray’s teammates and his coaches are heartwarming, as is the love of the romantic interest, Kaycee. There’s no violence except for football tackling, pushing and training. There’s no sex, except for a kiss and some dancing. Drug addiction is discussed, but it’s rebuked. Lying is also discussed and rebuked. Like many sports dramas, SAFETY is a great movie for families to watch together.