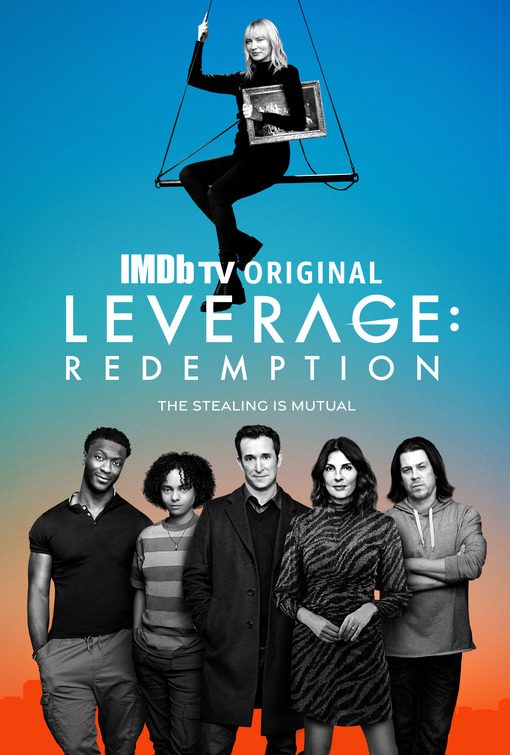 In the new IMDb TV series LEVERAGE: REDEMPTION, Sophie has to grapple with her husband’s death. Her old friends, who worked with her husband, inspire her to rejoin their efforts in seeking justice for victims. She reluctantly agrees, and the crew springs back into action without a pause. Along the way, they acquire Harry Wilson, a corporate lawyer who wants to redeem himself for the way he enabled crooks instead of bringing them to justice. Also, Hardison introduces the crew to his younger sister who must fill her brother’s tech-savvy philanthropic shoes. Each episode brings a new adventure as Wilson rights his wrongs, repairs his relationship with his estranged daughter and often saves the crew from destruction.

The highly entertaining LEVERAGE: REDEMPTION has a light moral worldview about serving others. It contains some Christian themes like forgiveness and seeking redemption. However, the episodes have some foul language, intense action violence and infrequent homosexual content. LEVERAGE: REDEMPTION contains miscellaneous immorality such as thieving and lying, as well as occasional anti-capitalist elements. So, MOVIEGUIDE® generally advises light to extreme caution for teenagers and adults.

(B, C, Acap, Ho, LL, VV, S, A, M):
Dominant Worldview and Other Worldview Content/Elements:
Light moral worldview with Christian elements focusing on redemption and forgiveness, the plot centers around people who want to redeem themselves and grow from their mistakes, the show demonstrates the importance of charity toward others, true justice is brought to evildoers, and there’s support for grieving friends, plus, while there are mentions of Jewish traditions and Catholic saints, there isn’t enough to say it presents a strong Jewish or Christian worldview, plus occasional anti-capitalist elements and one character is revealed to be a lesbian, and two episodes contain some females kissing
Foul Language:
Most episodes vary between three to 12 obscenities and light profanities
Violence:
Fights in every single episode (it’s usually a martial arts fight between Eliot and the bad guy’s goons or fighters), but the fighting is never super graphic, but it happens in every episode for action scenes, Eliot mainly fights to protect himself or his family, and in Episode 1.3, a character scares off a goon with a shotgun, there is an intense explosion, as well
Sex:
Two episodes contain some homosexual content with females kissing in both episodes
Nudity:
No nudity
Alcohol Use:
Alcohol consumption, used for celebratory purposes and not drunkenness
Smoking and/or Drug Use and Abuse:
Very light smoking by villains, no drugs; and,
Miscellaneous Immorality:
Villains rip off desperate people, stealing property, and the attempted destruction of privacy, but it’s clear their treachery is evil, plus the heroes do lie and steal to accomplish their goals, but most of what they steal is donated to charities or to help victims of those they take down in the series.

OVERVIEW REVIEW: After eight years of waiting, the Leverage crew returns triumphantly with new corrupt tycoons to ruin and a few fresh faces. Streaming on IMDb TV, LEVERAGE: REDEMPTION is the continuation of the 2005 show LEVERAGE and stars most of the original cast. The show retains the same tone and vibe that old LEVERAGE fans know and love, and one that new fans can enjoy.

In LEVERAGE: REDEMPTION, the protagonist from the original show, Nathan Ford, has passed away, leaving behind his widow ex-grifter Sophie Deveraux. In a rally to cheer her up and keep their friend’s memory alive, hitter Eliot Spencer, hacker Alec Hardison and thief Parker inspire her to return to the life of helping the little guys take on corporate giants who prey on the poor and desperate. Along the way, the group acquires Harry Wilson, a former corporate lawyer who wants to redeem himself for the way he enabled crooks instead of bringing them to justice. Additionally, Hardison introduces the crew to his younger sister who must fill her brother’s tech-savvy philanthropic shoes. Each episode brings a new adventure as Wilson rights his wrongs, repairs his relationship with his estranged daughter, and could very well save the entire crew from destruction.

LEVERAGE: REDEMPTION is streaming on IMDb TV, as well as Amazon Prime. The series presents a fascinating dichotomy of characters as the arcs are further developed than the original series. Parker has developed more self-confidence, though still aches to steal. Eliot let’s his emotional guard down and embraces the crew as his family. Sophie must come to terms with Nate’s death. Newcomers Breanna and Harry Wilson, however, reflect the program’s heart as they go from being corrupt to caring and engaged.

LEVERAGE: REDEMPTION has a light moral worldview about serving others with some prevalent Christian themes like forgiveness and seeking redemption. In fact, the whole concept that the Leverage team is built on is a kind of charity in the truest sense; they continuously help those in need without asking anything in return. In one episode, Sophie demonstrates her knowledge and respect for Catholicism, such as referring to a few saints in the Halloween episode. Hardison also talks about the Jewish understanding of “redemption,” focusing on the idea that it’s a slow and lengthy process. Eliot even talks about doing what is right and moving past mistakes to receive forgiveness and to help those in need.

That said, the series has some potential concerns for media-wise viewers. Each episode revolves around a con. While morally questionable, Wilson’s lawyer background encourages the crew to not engage in illegal activity. Compared to the original LEVERAGE, REDEMPTION allows for escapades beyond stealing from the rich and giving to the poor, and instead exposes the crooks’ evil deeds and allows reparations instead of stealing for personal gain. Also, each episode contains a fair amount of violence. Though Eliot, the hitter, refuses to use firearms, his hand-to-hand combat sequences can be intense. However, it’s never gory, and any blood is usually only shown in cases of minor injuries like a nosebleed or a bloody lip. The characters also lie to infiltrate the organizations and social networks of their targets and view this as the right thing to do. Also, there’s some homosexual content in two episodes that don’t add anything to the story. Finally, LEVERAGE: REDEMPTION has some foul language, and most of the villains are wealthy people or shady businesspeople. While some episodes are suitable for older children, other episodes require extreme discernment. Overall, therefore, MOVIEGUIDE® generally advises extreme caution for adults, older teenagers and media-wise viewers for LEVERAGE: REDEMPTION.