"The Facts Win the Case" 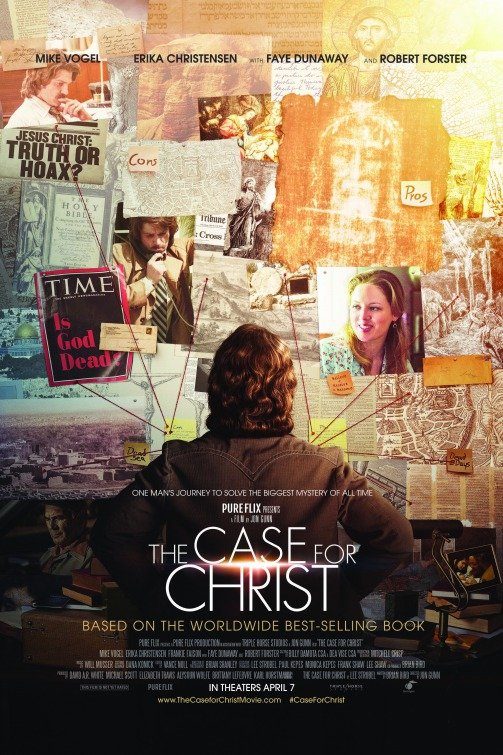 THE CASE FOR CHRIST is the story of how Chicago Tribune journalist Lee Strobel set out to disprove Christianity when his wife, Leslie, became a Christian and challenged Lee’s atheist beliefs. Leslie starts going to church with a Christian nurse who saved their daughter’s life at a restaurant. When Leslie tells Lee about her newfound interest in Christianity, Lee gets angry. A Christian colleague urges Lee to investigate the evidence for and against Christ’s resurrection. So, Lee does exactly that. There are some bumps along the way, however, that threaten his marriage.

THE CASE FOR CHRIST is a terrific, well-scripted drama. Mike Vogel and Erica Christensen do an excellent job making their portrayal of Lee and Leslie Strobel seem like real people. This is Director Jon Gunn’s best job yet. THE CASE FOR CHRIST also presents a riveting, dramatic depiction of an actual journalistic investigation. It shows that the evidence for Christianity and the Resurrection of Jesus Christ is beyond reproach. However, it also extols the honest search for truth. THE CASE FOR CHRIST is a must-see movie for both Christians AND atheists.

(CCC, BBB, L, V, AA, D, M) Very strong Christian, moral worldview extolling justice, truth, marriage, family, biblical faith, and prayer about a real-life atheist journalist, who challenged the historical, medical and legal evidence for and against the Resurrection of Jesus when his wife becomes a Christian and starts praying for his soul; one light obscenity during an argument; man gets angry at one point and turns over a table with a plant, man visits another man suffering wounds from a beating in the hospital and people discuss an accidental shooting incident involving a policeman; no sex; no nudity; alcohol use and man drinks too much a few times to the point of inebriation and drunkenness; brief cigarette smoking; and, [SPOILERS FOLLOW] a man is caught lying but is eventually exposed, a man is falsely imprisoned but is eventually freed, and atheist protagonist sometimes stubbornly goes out of his way resisting the evidence leading to the truth of Christianity, and it endangers his marriage.

THE CASE FOR CHRIST is the inside story of how Chicago Tribune journalist Lee Strobel set out to disprove Christianity when his wife, Leslie, became a Christian and challenged Lee’s atheist beliefs. THE CASE FOR CHRIST is a terrific drama reminiscent of ALL THE PRESIDENT’S MEN with excellent acting. It also brilliantly lays out the facts confirming Jesus Christ’s resurrection, but contains some tense moments requiring caution for younger children.

The movie opens with Lee receiving an award and a promotion at his new paper, the Chicago Tribune. Lee thanks his mentor, saying he taught Lee to let the facts lead him to the truth.

Later that evening, Lee and his pregnant wife, Leslie, celebrate at a restaurant with their daughter, Alison. When Alison starts to choke on some food, an off-duty nurse steps in and clears the obstruction in Allie’s throat. Leslie thanks the woman, and the woman tells Leslie she hadn’t intended to eat at that restaurant, but Jesus led her to change her plans and eat there. At home, Alison asks her parents who Jesus is, and Lee compares Jesus to a fairy tale character and tells her that her parents are atheists. “Then I’m an atheist too,” Alison says.

Leslie becomes friends with the nurse, who invites Leslie to her church. However, when Leslie tells Lee about her newfound interest in Christianity, Lee gets angry. When he expresses his anger at work, a Christian reporter in the newsroom challenges Lee to investigate Christianity. He tells Lee that the truth of Christianity rests or falls on the alleged Resurrection of Jesus Christ. Disprove that, and you’ve disproved Christianity, he says.

Lee proceeds to do just that, but as the evidence for Christianity mounts, and Leslie’s Christian faith gets stronger, Lee gets more frustrated and starts drinking too much. It becomes clear that Lee’s atheist beliefs and his marriage depend on the outcome of his investigation.

THE CASE FOR CHRIST is a terrific, well-scripted drama. Mike Vogel and Erica Christensen do an excellent job making their portrayal of Lee and Leslie Strobel seem like real people. This is Director Jon Gunn’s (DO YOU BELIEVE? and MERCY STREETS) best job yet. He’s created one of the best faith-based dramas ever.

THE CASE FOR CHRIST has a very strong Christian, moral worldview extolling justice, truth, marriage, family, biblical faith, redemption, and prayer. It also presents a riveting, dramatic depiction of an actual journalistic investigation that compares favorably with the acclaimed movie ALL THE PRESIDENT’S MEN about the Watergate investigation by two Washington Post reporters. In fact, it may be even better (and more honest) than that classic movie, because CASE FOR CHRIST includes some principles on what constitutes good objective journalism and good objective research as well as principles on how to eliminate unjust bias. To illustrate this as strongly and as dramatically as possible, the filmmakers have expertly inserted Lee Strobel’s investigation into an alleged cop shooting that had a major impact on his investigation into the claims of basic Christianity.

Ultimately, of course, all the factual evidence, and all the logic, points to the truth of basic Christianity. Beyond that, however, Jesus is worthy of your worship and your full commitment – morally, psychologically and philosophically. His teachings in the New Testament not only shine a light on Truth but also on Goodness, Justice and Beauty. There is no better guide for living and truth than the Gospel of Jesus Christ reflected in the New Testament documents.

THE CASE FOR CHRIST is a must-see movie for both Christians AND atheists. Caution is advised for younger children due to some tense moments and alcohol use.

Watch THE CASE FOR CHRIST: