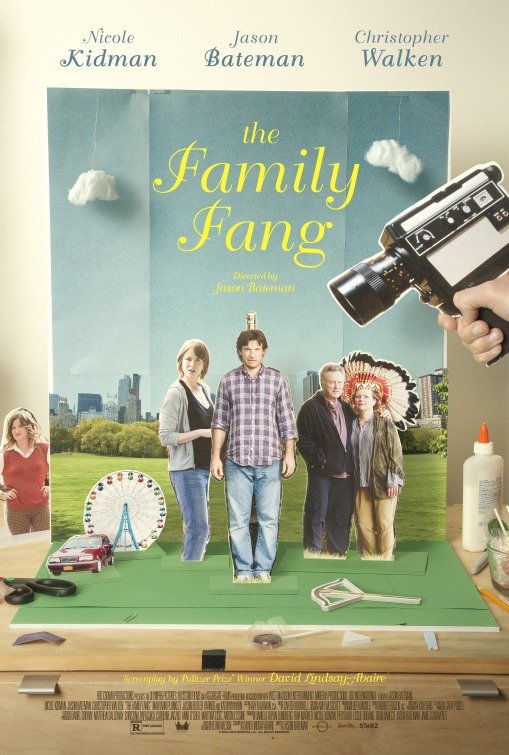 THE FAMILY FANG follows the story of Baxter Fang and his sister, Annie, who grew up as children of famous performance artists, Caleb and Camille. The parents make their children take part in crazy stunts, such as staging a bank robbery with a toy gun where someone appears to die. As a result, the children grow up to be troubled artists themselves, with Annie a famous actress and Baxter a writer having problems finishing his third book. When Baxter is injured during a writing assignment, his estranged parents show up at the hospital. The parents expect Baxter and Annie to take part in even crazier stunts, but the siblings decide they don’t want to participate anymore. A comical but sometimes dramatic chain of events ensues.

THE FAMILY FANG has many funny moments, infused with a poignant sense of melancholy and some moving moments. Eventually, the two siblings strengthen their family bonds. This helps them confront and overcome the Romantic worldview of their wacky, troubled parents. However, THE FAMILY FANG contains some strong foul language and other immoral, dysfunctional behavior requiring extreme caution.

(B, Ro, Pa, LL, VV, S, AA, M) Light moral worldview where two adult siblings act and bond together to confront and overcome the extremely unusual upbringing by their loony parents (including a cheating father who were disruptive performance artists who had a false, Romantic view of art as purely personal expression not matter the cost; 16 obscenities and profanities (including some “f” words and a couple GDs); family stages a fake bank robbery, a fake murder and pour fake blood over themselves in public as performance artists; film director manipulates the lead female character, an actress, into shooting a scene topless, but nothing is shown but her bare back and a censored photo in a tabloid, plus it’s revealed that a person has become a bigamist/adulterer; no depicted nudity; woman is trying to recover from an alcohol problem; no smoking or drugs; and, parents use their two children as pawns in games played on the public as part of their career as performance artists (at one point, two critics debate whether their actions are really art or not), deception, lying, a restaurant is tricked into handing out free sandwiches.

THE FAMILY FANG is a dark comedy about two adult siblings confronting their parents about their extremely unusual upbringing as a family of disruptive performance artists. THE FAMILY FANG is a well-made independent movie with a light moral worldview where the adult children’s family bond allows them to confront and overcome the Romantic worldview of their ditzy parents, but there’s some strong foul language and dysfunctional behavior that warrants extreme caution.

The movie follows the story of Baxter Fang (Jason Bateman) and his sister, Annie (Nicole Kidman), who grew up as the children of famous performance artists, Caleb Fang (Christopher Walken) and his wife, Camille (Maryann Plunkett). The parents called their children “Child A” and “Child B,” a sign of how their father didn’t see them as real people, but as objects in their stunts. The stunts included such events as staging a fake bank robbery and freaking out the real customers and employees, as well as an incident where the customers at a family portrait studio run away when the family smiles and pours fake blood all over themselves.

The parents filmed all of these stunts to create a career as controversial performance artists. As a result, the children grew up to make bad life choices. Annie is now a famous but troubled actress, who’s manipulated by her director. Baxter is a writer, who does a story on men who shoot potato guns and winds up being shot with a potato himself.

Baxter winds up hospitalized with an ear injury as a result of the shooting, and the hospital calls his parents to take care of him. Even though he and Annie don’t want to see them, the parents arrive, expecting them to take part in new and even crazier stunts now that they’re adults. However, Baxter and Annie decide they don’t want to play along anymore. This decision sets off a comical but sometimes dramatic chain of events that leads to their parents disappearing. Is their disappearance another staged event, or is foul play involved? Annie convinces Baxter they need to investigate on their own and find out.

Based on an acclaimed novel, and directed by Jason Bateman, who also lays Baxter, THE FAMILY FANG has many funny moments, infused with a quiet, poignant sense of melancholy. Its unique storyline serves as an insightful, at times moving, way of exploring troubled families, and the way that family dynamics shift as parents enter old age and children enter middle age.

Baxter and Annie feel severely hurt emotionally from their childhood experiences, but they nonetheless handle them with class and more patience than most people would be able to manage. The movie expertly balances its darkly funny moments with genuine emotion and a surprisingly intriguing mystery as well. All of it pays off nicely as a story. Also, the movie has a light moral worldview where the adult children’s brother and sister bond eventually helps them overcome the Romantic worldview of their wacky parents.

That said, THE FAMILY FANG contains some strong foul language and other immoral, dysfunctional behavior. So, MOVIEGUIDE® advises extreme caution.