"War and Peace in the Home" 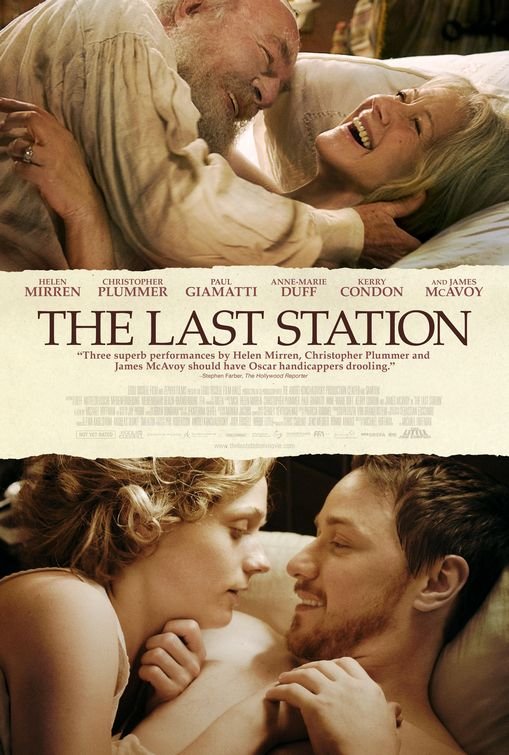 THE LAST STATION is the story of the last months of celebrated writer Leo Tolstoy. Tolstoy has become a leader of “the movement,” which rejects the established church and instead focuses on socialist principles. Living on a commune, his followers choose celibacy and espouse the high calling of “love.” Valentin, a dedicated Tolstoyan, becomes Tolstoy’s personal secretary and finds himself in the middle of a family conflict. Tolstoy’s wife, the Countess, rejects “the movement” when Tolstoy is about to create a new will which would leave the royalties from his writings to “the public” instead of his wife and children. Before he dies, there is a reunion and reconciliation of sorts between he and the Countess, but it is very subtle.

THE LAST STATION is very well acted, with performances that rise above the script, which lacks conflict. Valentin is a weak character who won’t stand up for either Tolstoy or the Countess. Viewers will want him to be strong, but he doesn’t. Despite some overt Christian content, a socialist gospel is presented throughout and “free love” concepts espoused. This content, which includes a lewd scene and brief nudity, warrants extreme caution.

(PaPa, SoSoSo, CC, Ab, FR, L, SSS, NN, A, D, M) Strong pagan worldview with very strong socialist elements, mixed with overt Christian content where a character prays, the Bible is mentioned, and another character crosses himself, but the church is attacked and some false doctrines are preached; two obscenities and four profanities; no violence; much discussion of sex, graphic depicted sex scene with an unmarried couple and implied sex scene with married couple; upper female nudity and upper male nudity; drinking of wine; smoking; and, discussion of adultery, constant bickering between married couple, abandonment by husband, and suicide attempt.

THE LAST STATION is the story of the last few months in the life of celebrated writer Leo Tolstoy. Tolstoy has become a leader of “the movement,” a philosophy that rejects the established church and instead focuses on socialist principles of no private property. Living on a commune, his followers choose celibacy and espouse the high calling of “love.”

Valentin, a young, dedicated Tolstoyan, becomes Tolstoy’s personal secretary and finds himself in the middle of a family conflict. Tolstoy’s wife, the Countess, rejects “the movement” when Tolstoy, influenced by his advisors, is about to create a new will which would leave all of the royalties from his writings to “the public” instead of his wife and eight grown children.

The marital conflict escalates. Meanwhile, Valentin, though taking a vow of celibacy, gets romantically and sexually involved with Masha, a fellow Tolstoyan who likes to break rules. She believes “the movement” has freed them from the church to pursue love, which she defines as sexual relations.

When the Countess discovers Tolstoy has indeed willed his royalties to public domain and not to his family, Tolstoy leaves his wife with his advisors to “end his days in peace.” While traveling, Tolstoy takes ill and is housed at the last station on the train route, where he dies after a long vigil. Before he dies, there is a reunion and reconciliation of sorts between he and the Countess, but it is very subtle.

THE LAST STATION is a very well acted drama with performances that rise above the script. The central conflict of the story is between Tolstoy and the Countess with Valentin caught in the middle. However, that conflict is never really resolved. Viewers root rooting for Valentin to stand up and take a stand – either with Tolstoy or with the Countess. Yet, he vacillates.

THE LAST STATION paints Tolstoy as something of a 1960’s “flower child” living in nature and setting up a commune, talking about love. But his philosophy is ill defined in that, though celibacy is a value he teaches, he himself spends a night with his wife. When questioned about celibacy by Valentin, Tolstoy shrugs and says, “Oh, I say lots of things.”

Tolstoy’s socialist ideas of not owning property also conflict with the fact that he and the Countess live in a mansion a few hours carriage ride from the commune. They have servants waiting on them hand and foot. Somehow, this hypocrisy is never addressed.

In the movie, Tolstoy’s chief advisor, Chertkov, is turning the movement into something of a cult. In a rare moment of backbone, Valentin tells Chertkov he is making the movement more in the image of Chertkov than Tolstoy.

The ideas of socialism are very strong throughout the movie. The question of what to do about private property becomes the central theme. Though not addressed in the movie, Tolstoy wrote often on Jesus Christ’s teaching, claiming that he advocated not owning property. Of course, why would one of the Ten Commandments be about protecting private property and its owner if socialism is a biblical idea?

At one point, Tolstoy’s advisor says, “Christ is Christ, but he (Tolstoy) is a prophet.” At another time when Tolstoy is talking to children, his advisers say that he is like “Jesus suffering the little children.”

Tolstoy states that all religions have one organizing truth – love. This obviously is not the case. A character also references the “superstition and nonsense of the church.”

Not everyone is against the church, however. The Countess prays when she hears that Tolstoy is ill. She brings an Orthodox priest with her when she comes to the train station. Tolstoy’s followers who camp outside the station cross themselves when Tolstoy’s casket is brought by and many in the crowd shout, “God bless you, Countess.”

Though well acted, THE LAST STATION has disturbing content such as Valentin and Masha’s sexual act depicted and much conversation about sex. The worldview requires much discernment to understand that the movie’s ideas of love are without the element of truth, thereby denying real love of its power.