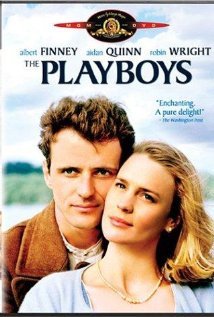 In THE PLAYBOYS, a seamstress Tara bears an illegitimate child in an Irish village in 1957, causing a scandal. Then, along comes a theatrical troupe, THE PLAYBOYS, which offers a way out of the village until jealousy blocks her escape. The cinematography and performances are excellent, but the plodding story is burdened by sexual situations, foul language and contempt for the church.

In THE PLAYBOYS, a beautiful seamstress Tara bears an illegitimate child in an Irish village in 1957, causing a scandal. Sergeant Hagerty, the village constable, professes his love and begs her to marry him. Then, along comes a theatrical troupe, THE PLAYBOYS. One of the actors, Tom, is taken with Tara. Tara soon sees him as a way out of the village. Sergeant Hagerty, however, is consumed by his love for Tara, and so he reveals the father’s identity and disrupts Tom’s relationship with Tara. On the night of the troupe’s final performance, Hagerty and Tom have their inevitable confrontation.

The cinematography, scenery and performances are the strong suits in this period piece. However, the story is plodding and predictable. Further staining this film are the sexual situations, the foul language and the contempt for the church. Sadly, the village priest is more concerned with personal power and church propriety than with the needs of the people. He is used to model corruption, hypocrisy and greed in the church. Some may applaud THE PLAYBOYS for its characterization of Tara as a strong woman who triumphs over difficult circumstances. However, one cannot overlook her adamant endorsement of fornication outside of marriage.