THE SECOND ANIMATION CELEBRATION: THE MOVIE 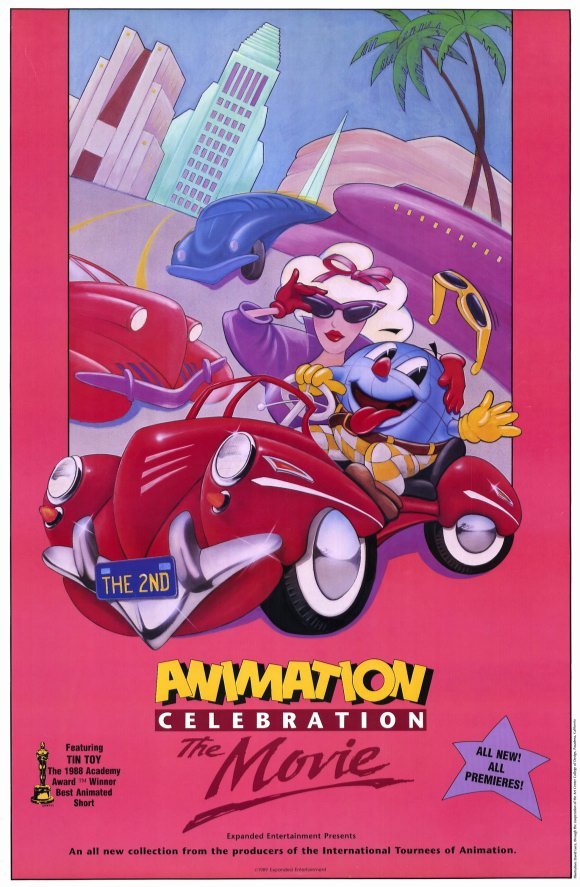 In this collection of 24 short films produced in the United States and abroad the viewer sees a wide variety of artists’ techniques employed. Here are what some of the short subjects are about…

“A Salute to the Olive Jar Animation Studio” and “Tin Toy” use claymation to display radically changing objects, or a wind-up toy’s first encounter with a toy-bashing baby. “Umbabarauma” dazzles with a kaleidoscope of patterns using an upbeat tempo. In “Beat Dedication”, a computer-graphic marvel, a hi-tech robotic punk drummer battles his nemesis, the giant Killer Volkswagon Fly.

Another short features the simple crayon sketches of children. In “Fingerwave”, a real pair of hands is photographed so that it appears each finger is moving to a different rhythm in the music. “Goodnight Norma… Goodnight Milton” is a somewhat sexually sleazy depiction of a married couple who, as they speak disparagingly of their “unattractive friends”, become grotesque-looking themselves as they undress to go to bed.

All the films are comedies, but several of the shorts contain a message that deal with adult-oriented social and political themes. For instance, “Propagandance” depicts the interaction between a Russian and a American, who gradually come to an understanding of each other (the question remains, Does the filmmaker understand the difference between Communism and republicanism?). “25 Ways to Quit Smoking”, as you might guess, motivates one to do just that. It is mildly offensive in its sardonic look at ways to kick the habit. Among them: light up with a blow torch or have your lips removed.

The collection also includes three films based on the popular comic strip, “The Simpsons”, with their contentious young son, Bart. Those not familiar with The Simpsons should be aware that it is the hottest of the anti-family TV shows. Its hero is fourth-grader Bart, whose spiked hair, wisecracks and non-achiever status are his badges of honor. When told they must attend a relative’s funeral, Bart screams, “Oh boy! I’ve never seen a dead body before!” Also in the short is a vulgar scene in which the kids attempt to out burp each other.

Viewers can enjoy and delight in about 18 of the 24 films, which are entertaining and imaginative. The rest leave much to be desired in terms of wit and wisdom.