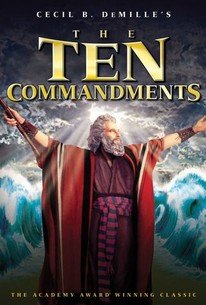 Cecil B. DeMille’s 1956 masterpiece, THE TEN COMMANDMENTS has been restored and put on Blu-Ray. After escaping death by the Egyptian Pharaoh’s army, the baby Moses grows up in the royal court. As a youth, Moses locks horns with the Pharaoh’s son, Rameses. Then, Moses learns of his Jewish roots and identifies with their painful slavery. Moses is caught, however, for murdering the master builder, who was cruelly punishing Joshua. Disowned by Pharaoh, Moses is cast into the desert, where he gains favor with Jethro and marries Jethro’s eldest daughter. Moses encounters the burning bush. There, God gives Moses his marching orders, to return to Egypt and demand that Pharaoh, “Let my people go!” That sets the stage for the final conflict with Rameses.

THE TEN COMMANDMENTS is a magnificent achievement in the history of film. Despite some hokey moments, the movie is carried along by the brilliant performances of Charlton Heston as Moses, Yul Brynner as Rameses and Yvonne DeCarlo as Moses’ wise wife. Best of all, THE TEN COMMANDMENTS makes God the real hero of the story, with a theological power seldom seen on the silver screen.

Cecil B. DeMille was one of Hollywood’s great showmen, and THE TEN COMMANDMENTS is probably his greatest masterpiece.

Now, Paramount Pictures has done a complete restoration of the movie to release on Blu-Ray, the top-of-the-line video format today, and THE TEN COMMANDMENTS has never looked better! In fact, watching this new print is a revelation on just how good this movie is, in spite of the fact that THE TEN COMMANDMENTS is also clearly a product of its time, with a couple obvious technical flaws, some historical problems and a shaky, melodramatic performance by the usually reliable Anne Baxter, who plays the love interest between Pharaoh and the younger Moses, played by Yul Brynner and Charlton Heston, respectively. Ultimately, the movie overcomes its problems to create one of the four or five greatest biblical epics of all time, depending on how one counts such things.

Though not usually shown in the TV telecasts of the movie, THE TEN COMMANDMENTS begins with DeMille introducing the movie by briefly describing the care he and his team took in trying to make the movie as accurate as possible, while filling in some gaps to Moses’ younger years. DeMille also sets the stage for the movie’s premise, saying that his version of the story is about freedom and deliverance from slavery. “The theme of this picture,” he adds, “is whether men are to be ruled by God’s law or whether they are to be ruled by the whims of a dictator like Rameses. Are men the property of the state or are they free souls under God? This same battle continues throughout the world today. . . .” Then, before getting to the birth of Moses, DeMille mentions how God said “Let there be light,” and created the Earth, giving mankind dominion over Creation, but man became evil and started enslaving his fellow man.

Cut to Ancient Egypt. The Pharaoh Seti is concerned about rumors that the Hebrew slaves in the land of Goshen believe that a deliverer has been born among them. Worried that this may be true, he orders all Hebrew newborns to be slain. That’s when Yoshebel places her baby in a basket to float down the Nile. The baby’s sister follows the basket and learns that the baby has been picked up by Pharaoh’s daughter, Bithiah, who names the baby Moses. Bithiah swears her maid, Memnet to secrecy, but Memnet keeps the Hebrew cloth wrapping the baby.

Years later, Moses becomes the favorite of Pharaoh Seti, even though Seti has a son, Rameses. Moses does everything well, while Rameses does everything he can to undermine Moses. The two men also vie for the love of Nefretiri, who also clearly prefers Moses.

Then, Memnet decides to spill the beans, and Nefretiri murders her. Moses pries the truth out of her and goes searching for his real mother. Ashamed of how the royal family has treated the Hebrew slaves, Moses goes to live among them. Three, he experiences their dignity and their belief in God. When, however, the master builder starts to whip a Hebrew slave named Joshua for stealing a Hebrew woman from him, Moses intervenes, killing him.

The evil Jewish overseer, Dathan, sees the murder and reports back to Rameses, who has Moses arrested. Seti disowns Moses and turns him over to Rameses for judgment. Rameses decides not to kill Moses outright, however, and instead forces Moses out into the Sinai desert, with only one day’s ration.

God sustains Moses in the desert until he comes to the well of the Midian sheik, Jethro, who has seven daughters. Jethro’s family lives at the foot of Mt. Sinai, where, it is said, God lives. Eventually, as he did in the house of Pharaoh, Moses proves himself as worthy in the house of Jethro, and Moses marries the eldest daughter, Sephora, the Greek word for her Hebrew name in the Bible, Zippora.

After having a child with Sephora, Moses comes upon the burning bush in the foothills of Mt. Sinai. God gives Moses his marching orders, to return to Egypt and demand that Pharaoh lets the Hebrew people go free. Of course, Moses obeys and thus begins a new clash of wills with Rameses, who’s now the Pharaoh of Egypt, with Nefretiri as his Queen.

There are admittedly some hokey moments in the middle of THE TEN COMMANDMENTS, and the movie takes some historical liberties with the early life of Moses. That said, the movie grabs the audience right away with its majestic opening, and the acting between Charlton Heston as Moses and Yul Brynner as Rameses superbly sets the stage for their later dramatic confrontation when Moses carries out God’s command to tell Pharaoh, “Let my people go!”

Most of the special effects in THE TEN COMMANDMENTS are magnificent. The parting of the Red Sea still holds up. What doesn’t hold up as well is the pillar of fire that blocks the Egyptian army’s path as the Hebrews cross the Red Sea. Even so, the huge sets depicting Ancient Egypt are absolutely fantastic, and the restored Technicolor makes them stand out even more.

Best of all, THE TEN COMMANDMENTS puts God as the real hero of the story. Some of the best lines in the movie occur after Moses talks to God at the burning bush. “He revealed His word to my mind and the word was God,” Moses tells Joshua and Sephora when they ask him about God. “He is not flesh but spirit, the light of eternal mind.” Then, when Joshua tells Moses he will go fashion weapons for the people to revolt against the Egyptians, Moses replies, “It is not by the sword that He will deliver His people but by the staff of a shepherd.” There is such a profound theological depth to these and other lines in the movie that it takes one’s breath away.

THE TEN COMMANDMENTS is clearly a brilliant achievement in the history of film. Putting this superb movie on Blu-Ray is a wonderful gift to all moviegoers.