VALERIAN AND THE CITY OF A THOUSAND PLANETS 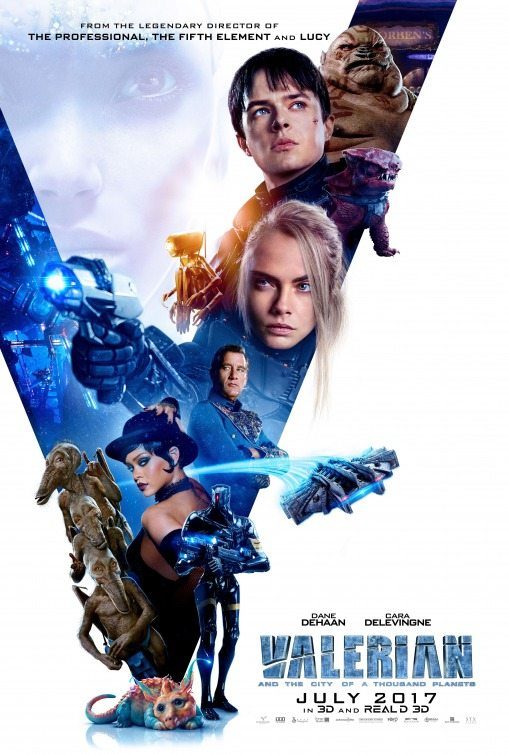 VALERIAN AND THE CITY OF A THOUSAND PLANETS revolves around an intergalactic government agent named Valerian and his fiercely independent female partner, Laureline. Their mission is to confiscate the last living alien creature that survived after the planet Mul was destroyed 30 years ago. As they go along on this mission, they begin to find out that everything they’re being told may not be true. Through many space battles, kidnappings and rescues, they uncover the mystery behind their mission. They must decide whether to obey their orders, or follow their instincts and act out of love.

VALERIAN AND THE CITY OF A THOUSAND PLANETS is visually spectacular. It also contains many overarching themes about acting out of love, compassion and forgiveness. There’s a line about praying for people who possibly could be in danger. However, there are few surprises in the story, and some of the humor and dialogue is a little cheesy. Also, the movie contains some suggestive moments, including a sensuous dance by an alien shape-shifting creature. VALERIAN also contains many intergalactic battles, gunfights, explosions, sword fights, and other violent elements.

(CC, BB, E, Ho, L, VV, S, N, MM) Strong Christian, moral worldview features a classic good vs evil battle set in an intergalactic fantasy setting, the protagonists work for the universal government and fight to maintain order and justice throughout space, there’s a mention of God in the beginning of the movie as well as a statement about praying for people who could possibly be in danger, there’s a statement made in the movie about how forgiveness is true love and love is more powerful than anything, hero asks heroine to marry him, there is mention of a honeymoon, and the female main character makes it clear that a wedding must precede it, love between family and friends is extolled, but there are some light Romantic elements that include a statement that love “breaks all the rules,” some light environmentalist elements such as the inhabitants of one planet talk about giving back to nature what “she” gave to them, although it’s done very passively and not expanded any further than that statement, and one sequence where men and women try to flirt with hero; several mostly light obscenities (but including one “s” word), plus there’s an implied but unstated “f” word; lots of strong and light action violence throughout as there are wars in space and on many different planets, multiple examples of gun, knife and sword fights, punching and kicking, large explosions and gunfire are very prevalent, no blood is shown except for mild scrapes on a few human’s faces, plus almost all of the aliens “bleed” a sort of yellow goo; some sexual content such as hero must go to a red light district called “Paradise Alley” to rescue his female co-worker, and women and men try to seduce him or flirt with him as he passes, and an alien performs a suggestive dance, the hero is known as a playboy, hero has a “playlist” of conquests, hero and heroine briefly wrestle in swimsuits, and this scene is portrayed with a good amount of sexual tension, heroine makes a provocative statement about a man not being able to complete an act in less than three minutes, and a burlesque type of dance performance by a shape-shifting, alien female singer; multiple examples of upper male nudity, images of scantily clad females, and the people on one planet wear somewhat sheer clothing; no alcohol use; no smoking or drugs; and strong miscellaneous immorality includes kidnapping, genocide, moral relativism by the antagonist, black market trades.

VALERIAN AND THE CITY OF A THOUSAND PLANETS takes place in the futuristic and intergalactic year of 2740. Major Valerian is a young government operative who travels all over space fighting criminals and completing his missions. He has a major crush on his partner, Sergeant Laureline, who takes her job much more seriously and doesn’t have time for his incessant flirting.

Valerian and Laureline are on a mission under the Minister of Defense to track down and confiscate the last living Mul converter, which is being hawked on the black market. This tiny, lizard-like creature possesses miraculous powers which are now invaluable, as the planet Mul was destroyed 30 years ago, along with all its inhabitants. As they travel along with the Mul converter, and try to secure its safety, what they are being told about their mission begins to stop making sense. They believe that someone is lying to them about the Mul converter, as well as the destruction of the planet Mul 30 years ago.

After trying a rescue mission to save Valerian, Laureline is then captured by an evil Emperor who reigns in Paradise Alley. Valerian must call upon the help of the shape-shifting performance artist, Bubble, in order to rescue his partner, who’s also the woman he loves. After finally making it to the center of Alpha, Valerian and Laureline learn some new information that uncovers the dark secrets behind their mission. They must now decide whether to follow the protocol of the law, or follow their gut feelings and instincts, and possibly save an entire planet’s existence.

VALERIAN AND THE CITY OF A THOUSAND PLANETS is a passion project from Director Luc Besson (THE FIFTH ELEMENT, THE PROFESSIONAL and LUCY) that stems from his childhood. Originally a French graphic novel series called “Valerian and Laureline,” Besson waited until he felt like he could do it justice with state-of-the-art visual effects. This film is done on a very large scale with breathtaking visual effects that pull the viewer into the world of Valerian. However, the story is very much spoonfed to the viewer. There are little to no surprises in the plotline. Also, the dialogue seems to be geared toward a younger audience, with very on-the-nose exchanges and at times cheesy comic relief.

However, the movie has a strong Christian, moral worldview. Many of the themes revolve around love and forgiveness and good versus evil. There’s also a reference to God and a statement about praying for people who possibly could be in danger. These positive elements are mitigated by some Romantic elements and a sequence where Valerian must go into a red-light district to rescue Laureline. Valerian is a playboy type, but he wants to marry Laureline. In the red-light district, men and women try to flirt with him, and a scantily clad alien singer performs a suggestive dance. VALERIAN AND THE CITY OF A THOUSAND PLANETS also contains a lot of intense action scenes with many intergalactic battles, gunfights, explosions, and other violent elements that could scare children. There’s not much blood, but the aliens bleed a yellow sort of goo.

All in all, MOVIOEGUIDE® advises extreme caution, especially for children.