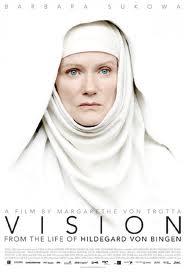 VISION: FROM THE LIFE OF HILDEGARD VON BINGEN is a biopic about the life of Saint Hildegard, a Catholic nun from the 12th Century. The results are a bit mixed. The movie tells how Hildegard’s mother brought her to a cloister of monks and nuns, to be raised by an older wealthy nun. Eventually, Hildegard is elected magistra of the nuns. She reveals, however, that she has visions from God. The visions encourage her to establish a healing ministry using natural medicine, a separate cloister for the nuns and to advocate looking toward the Bible and a personal relationship with Jesus rather than looking toward the church. This puts her at times into conflict with church authorities.

VISION is very elegant and beautifully filmed. The photography, the acting and the music in VISION are all very good, but the plot is very episodic because it tries to cover the whole life of Hildegard. The dialogue is also much too long. Also, there’s a very strong Christian worldview in the movie, with many positive references to Jesus and Scripture. But, VISION also has some strong feminist elements and strong Romantic, naturalistic elements.

(CC, BB, RoRo, FeFe, Ab, V, S, N, A, M) Strong Christian, moral worldview with Christ-centered statements and an affirmation of biblical truth in a Catholic story about a famous Catholic nun in the 12th Century, marred by strong Romanticism, feminism and naturopathy, plus movie shows there are bad people and good people in the church; no foul language; three people die, characters flagellate themselves; implied fornication results in pregnancy and people greet each other with kisses on the lips; partial upper male nudity; alcohol use but abstinence is lauded; no smoking or drugs; and, botched abortion, lying, scheming, nun accuses protagonist of self-promotion.

VISION: FROM THE LIFE OF HILDEGARD VON BINGEN is a biopic about the life of Saint Hildegard, a Catholic nun from the 12th Century who had visions, wrote liturgical music, became an author, and established separate monasteries for the nuns she led. The results are a little mixed.

This very elegant and beautifully filmed movie opens on the night before the turning of the first millennium. A preacher is talking about this being the very last day when the earth will be consumed, and there will be a new heavens and new earth. The next day a little girl wakes up and finds the sun is shining. The movie indicates that the famous Saint Hildegard was born on this auspicious day, although records claim it was 98 years later.

Cut to the Abbot of a big Benedictine cloister that includes cloistered monks and nuns. The Abbot is pointing to the shields on the wall indicating the wealthy families that donate to the cloister. Hildegard’s mother gives her daughter at the very young age of eight to the cloister as a tithe to the church, with a big offering of land. She is assigned to the older nun, Jutta (silent “J”), who is from another wealthy family and raising another 8-year-old.

Hildegard becomes Jutta’s darling, and the darling of the monastery. When Jutta dies, Hildegard is appointed and elected the magistra of the women’s cloister. She has only one vote against her, the other charge of Jutta who envies Hildegard.

Hildegard reveals to Monk Volmar that she has been having visions since she was a little child. She convinces him these visions are from God. The Abbot realizes these visions could make the cloister famous and bring in a lot of money. However, when he takes Hildegard before the Board of Inquiry, they accuse her of being of the Devil. So, she has to appeal to the Archbishop of Mainz, who becomes her lifelong protector.

Hildegard’s visions include being shown how to use natural elements such as herbs and plants as medicines. She becomes a naturopath, someone who uses natural methods to heal. Hildegard also has a tendency to be more Protestant, looking toward the Bible and a personal relationship with Jesus rather than looking toward the church.

When one of the nuns dies as a result of a pregnancy induced by one of the monks, Hildegard demands that the Abbot separate the monks from the nuns. She also has a vision of a new cloister for the nuns miles away. The Abbot protests, and she again appeals to the Archbishop.

A wealthy patron brings her 14-year-old daughter to the cloister, Richardis, who has heard about Hildegard and wants to serve her. She becomes Hildegard’s scribe. Years later, though, Richardis’ brother appoints Richardis as the magistra of another convent so he can obtain political power. All of the forces of the church are now against Hildegard because she stands against this. After the separation, Richardis dies of a broken heart, and Hildegard gets a vision that she needs to go and preach, which is unheard of for women at that time. She also speaks out against the asceticism and self-flagellation of the age, making the point that Jesus Christ carried all of our sufferings, so Christian’s don’t need to go out of their way to suffer, especially by beating or whipping themselves.

The photography, the acting and the music in VISION are all very good, but the plot is very episodic because it tries to cover the whole life of Hildegard. The dialogue is also much too long, and the subtitles are often hard to read because they move so fast. Many viewers may be bored.

Although there’s a very strong Christian theme in the movie, with many positive references to Jesus and Scripture, VISION also has some strong feminist elements and strong Romantic, naturalistic elements. It is clear that the filmmakers were trying to bridge the gap between Christian teachings and feminism. Thus, MOVIEGUIDE® advises caution.