WHAT A GIRL WANTS 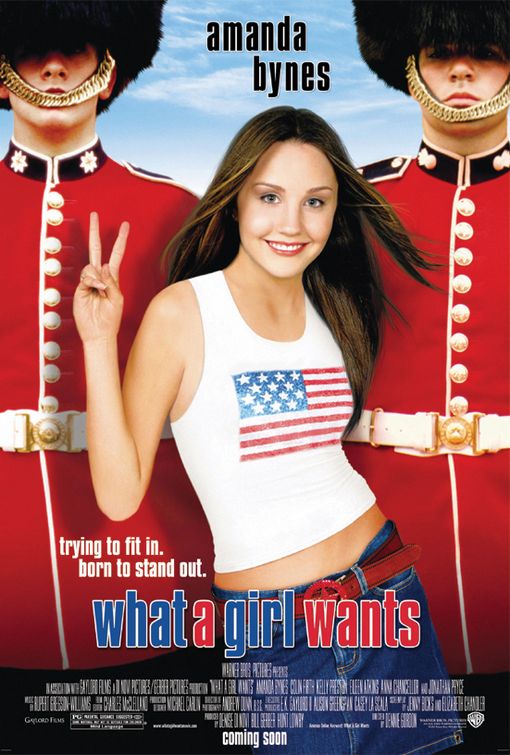 In WHAT A GIRL WANTS, Daphne (Amanda Bynes) sets off to find her estranged father, London's Lord Dashwood, and must soon decide whether or not she has the ability and the will to become a proper society girl. This movie has sweet, humorous, uplifting moments, but they are very slightly marred by some iconoclastic notions of "freedom" and society.

(C, B, Ro, AP, L, V, N, AA, D, M) Light Christian worldview with moral elements lauding family, fatherhood, parental love, and unselfishness as well as iconoclastic Romantic sentiments expressed toward traditions, society and "freedom," plus reference to Arab "tribal" wedding ceremonies, and patriotism is lightly mocked, perhaps in an attempt to attack notions of British imperialism; one light obscenity, one strong profanity, and six light exclamatory profanities such as "Oh, my God" and "Dear God"; violence is slapstick and includes a push into water, a chandelier falling onto a dance floor, a motorcycle messing up a party, etc.; no sex but snotty male teenager grabs girls' rear ends; nude statue and nude painting; alcohol use and woman appears drunk at wedding party; brief smoking; and, lying and betrayal are rebuked, but small tattoos are not rebuked.

Many moviegoers, including adolescent girls and young teenage women, may be really charmed and touched by WHAT A GIRL WANTS, a funny, light and heart-warming story about a teenager trying to reunite with her father. Anglophiles, however, may be uncomfortable with some of the story’s middle parts, where the movie contains some Romantic notions about tradition, society, patriotism, and individual freedom.

The story focuses on American teenager Daphne Reynolds (played by Amanda Bynes), who often accompanies her musician mother, Libby (played by Kelly Preston), to work as a food server for wedding parties. At every wedding, Daphne watches wistfully during the father-daughter dance, wishing that she knew her father, and that some day he would dance this dance with her.

Daphne’s father is Lord Henry Dashwood (Colin Firth), a gentleman living far away in London who is running for a high political office in the House of Commons. He doesn’t even know he has a daughter. He is engaged to a pretentious, snobby woman, Glynnis, and has an equally pretentious, snobby step-daughter-to-be.

Daphne decides she must go and find her father, so when she turns 18, she takes a trip to England. She finds a humorous way to get into the Dashwood mansion, where she introduces herself to her father, her grandmother and several soon-to-be-step-folks. Her father is stunned, and his entourage is appalled. After all, Lord Dashwood is the only scandal-free candidate running for office!

Henry confesses that he and Libby were once married in a questionable tribal ceremony in Morocco, but that his wife mysteriously left him soon thereafter when they returned to England. A flashback shows a younger version of the devious father of Glynnis, who has political ambitions, convincing Libby that her marriage to Henry will not work. In the present, Glynnis assures everyone that Arabian tribal marriages aren’t real marriages, and the child is probably not his. “Why does she have my eyes, then?” the father asks. The grandmother is clearly crazy about Daphne, but she warns her, “No hugs, please. I’m British. We only show affection to dogs and horses.”

Henry invites Daphne to a fancy dress show, where the entire royal family will be in attendance, but her soon-to-be evil stepsister tricks Daphne into wearing something completely inappropriate, and a strange twist soon has her modeling on the runway and falling into Prince Charles’ lap! After several more such botched parties, Lord Dashwood has a serious talk with his daughter about changing. He shows her the “hall of Dashwoods,” a family portrait collection of all the family members throughout the centuries, each having sacrificed a limb or two for the sake of duty. Daphne vows to change, and so to become a true, well-behaved Brit, befitting the Dashwood name.

A snag occurs, however, when she begins falling for a cute musician, who is not at all the society type that looks good in newspapers. Soon everyone must choose between duty and appearances or love and family.

WHAT A GIRL WANTS is a sometimes funny, zany, tender movie. It strikes a chord as it speaks to the heart of one thing that every daughter truly wants and needs, which is a caring father who puts her first.

WHAT A GIRL WANTS falls along the lines of THE PRINCESS DIARIES in some of its tone, but the message in WHAT A GIRL WANTS is not as positive because of its mixed nature. Whereas PRINCESS DIARIES shows how duty, honor, family, patriotism, and individual freedom may be reconciled, this movie does not. For instance, although it lauds family, fatherhood, parental love, and unselfishness, it also attacks duty and tradition. For example, the movie mocks the patriotism in Henry’s English family, perhaps in an attempt to subtly attack notions of British imperialism. Also, one long bonding sequence between Daphne and Henry has Henry and Daphne escaping the constrictions of their social obligations, with Henry eventually getting a small tattoo. Christian and Jewish families who take seriously the Bible’s command not to mutilate or tattoo your body would not be amused.

WHAT A GIRL WANTS is basically a fairytale. Much of the humor rests on the British-American differences and, of course, it’s the Americans that win. The stuffy grandmother warms up, the snotty boy gets his comeuppance, the haughty lady with the dog takes a new perspective, the ugly fat twin debs become attractive, all because Amanda, unaware of the social restrictions of British society, has taken a “refreshing” unembarrassed approach to certain situations. The poor but artistic girl who goes in search of her father (who of course is fabulously rich and handsome and lives in a palace) gets to live the life of a princess and socialize with the Queen, then realizes what is really important. This movie pits American ideals of freedom and democracy, of “be yourself” against English ideals of what is proper in civilized society. As any fairytale, it literally ends with “and they lived happily ever after.” Of course, the American ideals win out. Our characters have shed their formal clothes, now all in jeans, they carry their own food to the al fresco lunch, and the butler sits down to eat with them.

Thus, WHAT A GIRL WANTS contains some unresolved Romantic notions of “freedom” that naturally conflict with notions like duty, honor and patriotism. The sacred Christian roots of Western Civilization, however, including the history of the United States and Great Britain, not only teaches us how duty, honor, family, patriotism, and individual freedom may be reconciled, but also how faithfulness to God can be carried out without destroying one’s duty to family and country. It also shows us how we can uphold notions of liberty without sacrificing our duty to family and country. WHAT A GIRL WANTS says that love and family trump duty and honor. This can be a positive message, but it is hoped they don’t blind people to the many benefits that can come from duty, honor, tradition, and love of country.

This movie is correct in saying that, if Henry truly loved Libby, he would have searched for her when she ran away. Also, the movie is correct that fathers have an important duty to nurture their children. However, the movie is wrong to imply that these moral responsibilities necessarily conflict with traditional ideas concerning one’s duty toward society, tradition and country. In the final analysis, however, WHAT A GIRL WANTS is not anti-British, nor anti-great-exploits, but rather it asks and answers the right question, “How can you continue to sacrifice life and limb for your country and yet fail to see that the most precious things worth pursuing and fighting for are right under your nose?”

Rent or Buy WHAT A GIRL WANTS: