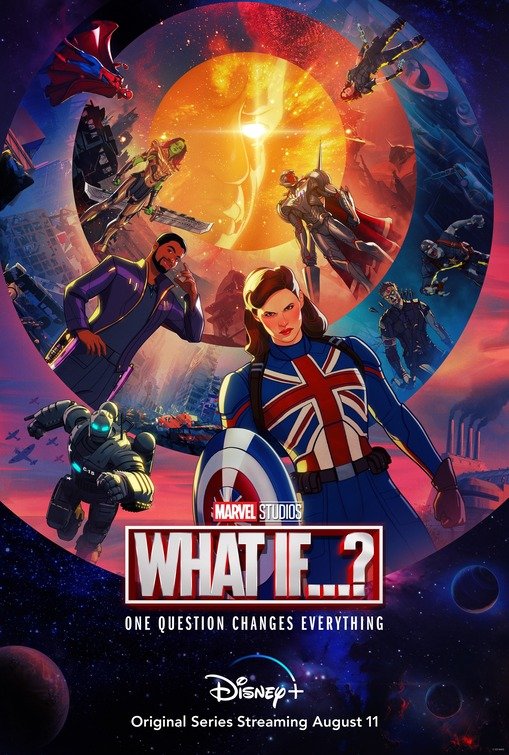 WHAT IF. . .? is an animated series on Disney Plus. It imagines a multiverse where different decisions create different Marvel Comics superheroes in separate universes. MOVIEGUIDE® screened the first two episodes to get a feel for the series. In the first episode, a terrorist act ends up with Peggy Carter having to become the first super soldier for the Allies in World War II. With help from Steve Rogers, Peggy changes the tide of the war and saves the day. In the second episode, space pirates kidnap Prince T’Challa of Wakanda, and he becomes a Star Lord. T’Challa preserves an air of nobility and humility. After a close escape, he’s determined to return home and visit his royal family.

(BB, C, PP, ACAC, Fe, Pa, H, L, VV, S, A, M):
Dominant Worldview and Other Worldview Content/Elements:
A hierarchy of physical beings are exhibited throughout the series, though one character named The Watcher seems like a character with some sort of transcendent vantage point, the most benevolent and heroic characters live up to a moral code that strives for virtues aligning with Christian, biblical morality promoting sacrifice, fighting evil, humility, etc. (Episode 1.2 tells a Prodigal Son story), with strong patriotic, anti-fascist sentiments, plus some feminist undertones persist in Episode 1.1 (including villainizing military figures who don’t believe women should be soldiers), some Nazis have joined a secret organization intent on world domination and discuss ascending to a level of deification and obtaining this involves consulting powers beyond themselves that are steeped in pagan legend, and the series relies on the false humanist concept of a multiverse, which is deceptive and has never been factually or scientifically proven
Foul Language:
A few light obscenities in each episode such as “bloody hell” and “no way in hell”
Violence:
Lots of strong action violence such as wrestling, choking, kicking, hitting, acts of terrorism, heavy artillery fire, explosions where people are killed, people mortally shot or wounded by gunfire, tanks blown up, a man crushed to death by a creature’s tentacles, and discussions about murder, genocide and death
Sex:
A character briefly and metaphorically comments on the romantic escapades of a “playboy”
Nudity:
No nudity
Alcohol Use:
Several scenes of characters drinking together in a bar, a talking alien duck remarks how he needs a drink, and a woman talks about the lack of effects alcohol has on her system
Smoking and/or Drug Use and Abuse:
No references to smoking or drugs; and,
Miscellaneous Immorality:
A child is kidnapped by space pirates and woman alludes to a scientist’s ability to “push buttons.”

WHAT IF. . .? is an animated TV series on Disney+ that imagines a multiverse where different decisions create different Marvel Comics superheroes from the ones that fans know and love. MOVIEGUIDE® reviewed the first two episodes to get a feel for the series. In the first one, a terrorist act ends up with Peggy Carter having to become the first super soldier for the Allies in World War II, and the second episode shows the Wakanda Prince aka Black Panther being kidnapped by space pirates and becoming a Star Lord.

In the pilot episode of WHAT IF. . .?, a mysterious and powerful being called The Watcher looks down on the cosmos and informs viewers that amid similar yet alternate dimensions it only takes a single action, no matter how seemingly insignificant, to change an entire series of outcomes. New realities are thus created, mixing up some of fans’ most beloved Marvel characters.

The Watcher welcomes his audience to a multiverse of infinite possibilities. The first hypothetical scenario to be realized replaces Captain America, or Steve Rogers, with Captain Peggy Carter (Hayley Atwell).

As the Allied Powers work tirelessly to produce a super soldier to help bring an end to World War II, an undercover terrorist working with Hydra, a science division of Nazis, thwarts their plans. While Steve Rogers was the initial specimen chosen to be injected with the serum and undergo the procedure to be transformed into a man of superior strength and agility, he is severely injured in an explosion set off by the terrorist.

Thinking quickly, Agent Peggy Carter chooses to remain in the lab during the transformation of Steve Rogers. However, a secret agent explodes a small bomb and shoots Steve. So, with Steve wounded, Peggy decides to place herself in the transformation chamber and becomes the first super soldier. However, since she’s a woman, several of her peers and military higher-ups frown upon her decision. After all, a woman soldier was out of the ordinary, and, in most cases, out of the question.

The rest of the episode follows a plot roughly similar to that of the 2011 movie CAPTAIN AMERICA: THE FIRST AVENGER, except the super soldier at the center of it all is Peggy Carter instead of Steve Rogers. Accordingly, her suit and shield carry the patriotic emblem of Great Britain, rather than that of the United States.

Carter’s nemesis, Johann Schmidt/Red Skull, is the governing head of Hydra, which splits from its ties to the Nazi regime. In this version of reality, Red Skull successfully opens a portal to another world via harnessing the Tesseract, one of the Infinity Stones found on Earth. Not only that, but a hydra-like creature starts making its way through the portal. Peggy and her new-made friends and fellow-soldiers must drive it back to its place of origin, but it comes at a cost.

In Episode 2, “What If. . . T’Challa Became a Star-Lord,” viewers of James Gunn’s GUARDIANS OF THE GALAXY will be met with the familiarity of the family of Yondu’s band of Ravagers. However, the writers have thrown a few curve balls at viewers. T’Challa (Chadwick Boseman) is kidnapped by Yondu’s henchmen from Wakanda as a boy instead of Peter Quill. He travels the galaxy seeking to rob from the well-off to sustain those who are less fortunate. It’s a classic Robin Hood principle, though, in the real story, Robin Hood stole tax money that the British government stole form the people.

Joining Star Lord T’Challa and Yondu are Nebula, Korath, and. . . Thanos. Surprisingly, the all-out genocide attempted by Thanos in the mainstream MCU timeline also occurred in this alternate reality. However, the giant now spends his days gardening and drinking and doesn’t seem to hold a malevolent grudge against the fact that his idea failed to come to fruition. His character here, while still gruff, is even likeable.

Over the course of T’Challa’s adventure, he learns the importance of friendship, the price of liberty and the significance of family. Though he went missing while still a young boy, T’Challa ventures across the galaxy to reunite with his elderly father, King T’Chaka, who has sought his son throughout the heavens, looking up at the night sky for two decades and hoping that one of the shimmering lights in the distance might be his missing boy. The Prodigal Son, who had not understood or fully appreciated his father in his youth, returns to Wakanda and is warmly welcomed. The episode closes with a touching tribute to the late Chadwick Boseman.

As for a comparison of suggestive content between the two episodes, the first includes much more action violence than the latter, while the second episode incorporates a good deal of drinking references. Both episodes of the series are filled with fleeting cameos of familiar or forgotten faces from the Marvel Cinematic Universe. As with most of the Marvel movies, there’s plenty of action and frequent violence. At the core of each story, however, are the struggles, virtues and relationships that go into making a hero.

For example, if it weren’t for her courage and perseverance, Peggy Carter could not have been an effective super soldier. And, if Star Lord T’Challa hadn’t listened to his conscience and recognized his obligation to his family, he would never have returned to Earth. Heroes fighting against evil, even if they’re fictitious, show us what we might be capable of if we followed virtue more closely.

Overall, therefore, the first two episodes of WHAT IF. . .? are terrifically entertaining, morally uplifting, redemptive tales. However, MOVIEGUIDE® advises caution for older children because of strong action violence, brief foul language, light innuendoes about a scientist being a playboy, some feminism, and the false humanist concept of a multiverse. Designed to make God unnecessary, the humanist idea of a multiverse is deceptive and has never been factually or scientifically proven. In reality, even a multiverse would have a beginning and thus would need a transcendent cause such as an Eternal, Unchangeable, Nonmaterial, Benevolent, Personal, and Just, but Merciful Personal Divine Creator, i.e., a God exactly like the one depicted by the Bible.