"A Delightful Tale About Fixing a Broken World" 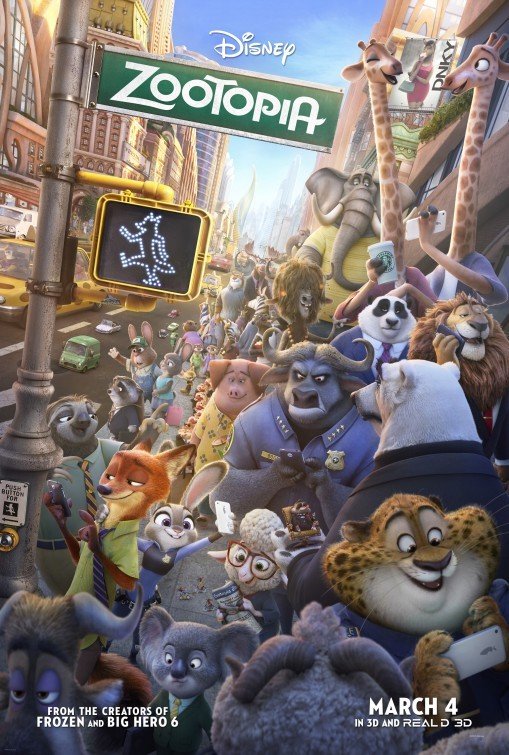 ZOOTOPIA is an animated adventure comedy set in a vast animal metropolis where predators and prey get along with each other. Judy Hopps has always dreamed of becoming a police officer. She gets her chance when Zootopia Mayor Lionheart decides to hire the city’s first bunny rabbit policewoman. However, the police chief opposes the mayor’s plan and turns her into a meter maid. Judy gets her chance to be a real police officer when she teams up with a sly, streetwise fox to solve the case of a dozen predatory animals, who’ve mysteriously disappeared.

ZOOTOPIA is funny, exciting, heartwarming, and beautifully animated. Some of the action involves scary animals going berserk, so caution for younger children is advised. ZOOTOPIA has a strong moral worldview with strong redemptive elements. There are positive references to God, prayer and miracles. Also, there’s a biblical, conservative message extolling police work to fix a broken world. ZOOTOPIA will also please more liberal minded viewers, with messages against bullying, against negative stereotypes and supporting getting along with different people. ZOOTOPIA is a fun, uplifting time at the movies.

(BBB, CC, Ro, PC, FR, L, VV, N, M) Very strong moral worldview with strong redemptive, American values elements includes positive references to God, prayer and miracles, police are explicitly called upon to fix a “broken” world, forgiveness, family, messages against bullying and envy, doing the right thing, , plus some Romantic, slightly politically correct elements of following your dreams, a message that you can be anything and should try anything, negative stereotypes rebuked and a yak meditates saying “Om!” but it’s also kind of a joke; a few light “butt” obscenities and a couple light profanities; lots of light and some strong action, comic violence includes

“Godfather” character threatens to “ice” people, scary black jaguar goes berserk and attacks bunny and fox, otter goes berserk a couple times, characters dangle over a steep ravine and fall, animals go berserk and chase good guys, huge advertisement donut almost squashes little mouse that’s just come out of the beauty parlor, rabbit has to dodge little mice as she “skates” along street using two little mice cars in pursuit of a weasel, rabbit falls while running obstacle course, animals are kicked during action scenes; no sex; animals are clothed, but rabbit police officer is shocked to come upon a “naturalist” club of animals who refuse to wear clothes (nothing salacious or explicit is shown other than animal behinds); no alcohol; no smoking or drugs, but animals are deliberately poisoned by a naturally occurring substance that causes them to go berserk; and, bullying but rebuked, deceit but caught and rebuked, con man eventually goes straight, blackmail, a cheetah character is rather effeminate.

During its Golden Age, some of the best Hollywood movies were able to bridge America’s social divisions in clever, entertaining ways that had broad appeal.

For example, in the Frank Capra Great Depression classic IT HAPPENED ONE NIGHT, a working, no-nonsense city reporter played by Clark Gable was able to fall in love with a spoiled rich girl, played by Claudette Colbert, and even win the admiration of her wealthy father. Thus, tensions between rich and poor during a volatile time of social upheaval in America were smoothed over by love, with a dash of integrity and humility. In the end, Gable’s character realizes his assumptions against wealthy people being completely selfish were too harsh, but the rich girl and her father learn, conversely, that their assumptions that a regular working guy like the reporter is envious and will only want money from them. Both assumptions turn out to be wrong, and they lived happily ever after.

Disney’s new animated movie, ZOOTOPIA, at times reminded MOVIEGUIDE® of this long-lost ability of Golden Age Hollywood fables like IT HAPPENED ONE NIGHT to bridge the divisions between rich and poor, male and female, young and old. It’s a movie with solid messages that can appeal to both liberals and conservatives, both Democrats and Republicans, both atheists and religious people. For example, the movie pictures a world where animal predators and their prey, the lion and the lamb, have “evolved” to live in complete harmony in a utopian city called Zootopia. At the same time, it pictures a fallen world where bad things can happen, a world in need of a good, hard-working cop to identify the bad guys, lock them up and keep the peace. The clash of Left and Right can even be seen in the movie’s theme song by pop sensation Shakira, which is entitled “Try Everything.” The song appeals to liberals in that it encourages people to pursue their dreams and “try everything,” but the song also appeals to conservatives in that the lyrics admit that the world is messy, and you’ll make mistakes every day, so you just have to get up and try again if you fail, or do something else.

Thus, the movie opens in rural Bunnyburrow, where little Judy Hopps performs a little school play with her classmates for their parents. The play explains that animals have “evolved” so much that predators and prey now live in total harmony in the city of Zootopia, where you can be whatever you want to be. However, Judy’s parents are chagrined to learn that their little daughter wants to become a cop and “make a difference.”

Fifteen years later, Judy is trying very hard at the Police Academy to measure up to all the other, bigger animals. Images of Judy on the obstacle course show Judy failing and falling repeatedly, only to get up, try again and use her mind and her hopping ability to successfully complete the course with flying colors. The next thing you know, Zootopia Mayor Lionheart and Assistant Mayor Bellwether, a little lamb, are welcoming Judy as the new member of Zootopia’s police force. In fact, she’s part of the city’s new policy of “inclusion,” where even a little bunny rabbit can be a police officer. So, Judy proudly gets on the train headed for the central city area, Savanna Central, where animals of all stripes and sizes work together. Her parents are still scared, though, that the city will eat their little daughter alive, metaphorically speaking. They promise to pray for her, but Judy tells them not to worry.

When she gets to Savanna Central, Judy is disillusioned that Police Chief Bogo, a huge water buffalo, assigns her to become a lowly meter maid. Bogo is totally opposed to the mayor’s new inclusion policy for bunny rabbits, even though Judy was at the top of her class.

Judy decides to show her worth and write 200 tickets by noon. She totally meets that goal. However, she gets conned by a sly red fox named Nick Wilde and his companion, a Chihuahua who poses as a little child but is really an adult. Judy pays $15 for a huge red popsicle for the Chihuahua, but Nick and the Chihuahua transform the popsicle into a bunch of little popsicles and sells them to a horde of little hamsters working in the financial district. They then take the little popsicle sticks and sell them as “red wood” to a local lumberyard.

Back at the police station the next day, Mrs. Otterton, an otter, goes to Chief Bogo to plead with him to find her missing husband, Emmett. Bogo dismisses her complaint, even though the police are searching for 14 other missing predators. Judy offers to take Mrs. Otterton’s case, but Bogo gives her only 48 hours to crack it. If she fails, Judy must resign from the police force.

Judy has learned about Nick’s popsicle scam. She also learns Nick was the last person to see Emmet the otter alive. So, she blackmails him into helping her track down Emmet’s whereabouts. Their investigation uncovers some wild and wooly shenanigans, but Judy makes a mistake that endangers the whole city and severs the growing friendship between her and Nick. When Judy stumbles upon the whys and wherefores behind the disappearance of the missing mammals, can she convince Nick to work with her again and help her bring the culprit to justice?

ZOOTOPIA is funny and exciting throughout. It also has plenty of heartwarming moments as well as some fantastic, beautiful animation. It’s both a buddy comedy and a police comedy, so there’s lots of action. Some of the action involves scary animals going berserk, so caution for younger children is advised.

ZOOTOPIA has a strong moral worldview with some redemptive elements. There are positive references to God, prayer and miracles. Also, Nick grows from becoming a con man to becoming a good guy. ZOOTOPIA has a lot of positive moral messages, including never giving up, perseverance, courage, seeking forgiveness, helping others and fixing a broken world by becoming a diligent police officer seeking truth and justice, and doing the right thing. Unlike the feelings of some people these days, being a police officer is seen as a good thing in ZOOTOPIA.

The movie’s more liberal messages, such as follow your dreams and the idea that you can be anything you want, are mitigated by these positive messages. Also, the movie makes fun of transcendental meditation in one scene and mocks political correctness at one point when Judy tells people that only other rabbits can say she’s a “cute” bunny. That said, there are a couple references to animals “evolving.” Also, the movie deliberately attacks stereotypes – notions like elephants never forget anything, rabbits are always timid and foxes can’t be trusted. This message fits in with the movie’s title song, which is entitled “Try Everything.”

Eventually, however, the movie’s protagonist learns that the world has always been a broken place and needs a good, courageous cop to enforce standards and keep the peace. Also, the movie’s environment reflects American society. Like America, Zootopia is a melting pot. While people are free to be anything they want, they can’t just satisfy their own selfish wishes by trampling on the liberty, wishes, dignity, and rights of others.

ZOOTOPIA is a fun, uplifting time at the movies.