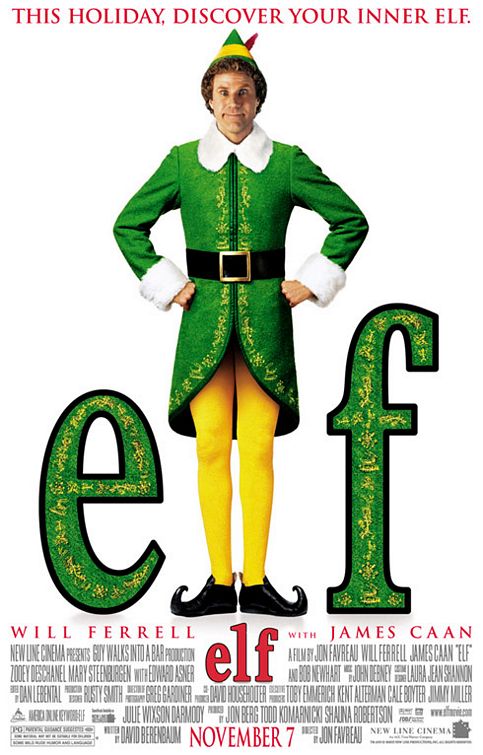 In ELF, a very tall elf must leave the North Pole and travel to earth to find his real parents, and, in the process, he creates quite a stir! This cute, funny Christmas comedy has, regrettably, no mention of the Christ of Christmas.

(Pa, B, V, AA, M) Pagan worldview portraying a Christmas movie with no mention of God or Christ, but with a subtle portrayal of a Menorah, a Jewish icon; no cursing but reference to bad-smelling asparagus pee; mild comedic violence with a store Santa fighting an irate elf, though nobody is hurt; very subtle sexual innuendo with protagonist saying his tongue swells and his heart beats faster to a girl he likes; some alcohol effects portrayed as protagonist accidentally gets drunk with another worker; and, miscellaneous immorality shown with protagonist’s half brother, a cynical boy, showing disrespect to a group of people in a boardroom, and being rewarded by his father.

ELF stars funnyman Will Ferrell as Buddy, an orphaned human baby who crawled into Santa’s sack unnoticed one Christmas Eve and was raised by elves at the North Pole. Since the average elf is three feet tall, buddy at six-feet-two is a rather obvious standout. Bob Newhart plays his adopted father with typical dry wit. Though his life at the North Pole has taught him to be simple and kind, his size and comparative slowness of speed at making toys makes him an oddity. Overhearing two elves talking about him being a “human,” his adopted father must tell him the truth. His real mother and father were young and unwed, and his mother had him unknown to his father, and then died. Santa (Ed Asner) advises him to go to New York to find his real father, and who he really is as a human.

His real father (James Caan) is a typical Scrooge. His children’s book publishing is his life, and he has little time for his wife (Mary Steenburgen) or his son Mike. “Buddy the elf” shows up, wants to live with them and turns their world upside down! Though 30 in human years, he has the simplistic, childlike ways of a five-year-old. . . from another planet!

ELF is a humorous Christmas movie meant to take advantage of the market with the likes of THE SANTA CLAUSE, CHRISTMAS STORY, and THE GRINCH. Having absolutely nothing to do with Christianity, it stays with the premise that the highest and best use of Christmas is to “bring out the good” in everyone. Other than the humanistic view of Christmas, the only objectionable parts are when Buddy tells a beautiful co-worker that when he sees her, his “tongue” swells, his heart beats faster, etc. There is no sex, or other innuendo, and most children would not pick up on this line. While Buddy’s father is in a “brain storming session” with his writers, one has the idea for a book with a family of asparagus who are embarrassed about their pee smelling bad. The idea is brushed off and new ones appear.

Will Farrell is extremely funny playing Buddy in this “fish-out-of-water” story. He plays Buddy straight as an elf that thinks the best of everyone, wants to hug everyone, and cannot understand why anyone would not believe in Santa Claus! He is a fantastic bumbler – tripping, falling, and generally wrecking every place he goes. The scene where he tries to get on an escalator is lots of fun. Another is when a “store Santa” starts greeting the children, and Buddy confronts him as a charlatan in front of the children, ultimately causing a fight. (Apparently, a fighting Santa and screaming children make the movie a PG.) Also, Buddy’s penchant for maple syrup gets him in trouble when a co-worker in the mailroom offers him a bottle of alcohol to help pick up his coffee, and Buddy pours the entire contents of liquor into his cup! Soon he is break dancing on the worktables, high as a kite!

Director Jon Favreau’s style for graphics, sets, animation, and titles is very 60s feeling, harkening back to TV’s RUDOLPH THE RED NOSED-REINDEER and other “clay-mation” style holiday shows. At the North Pole there is an animated penguin, snowman, and walrus that interact briefly with Buddy as well as a narwhal!

In the city Buddy is routinely run over by yellow cabs, likes to make himself dizzy in a revolving door, and stands in childlike wonder at the Christmas decorations. He wins the admiration of his little half-brother when he decimates a large number of snowball- throwing ambushers with his high speed, machine-gun-like deadly accuracy, in a spoof of many cop and war movie scenes. In the end, Buddy saves Christmas and is accepted by his real father.

Overall, the production quality for ELF is fairly high, and Ed Asner, James Caan, and Mary Steenburgen play their parts well. Other than the above-described scenes, ELF is a fairly harmless, mindless-world-view Christmas movie.