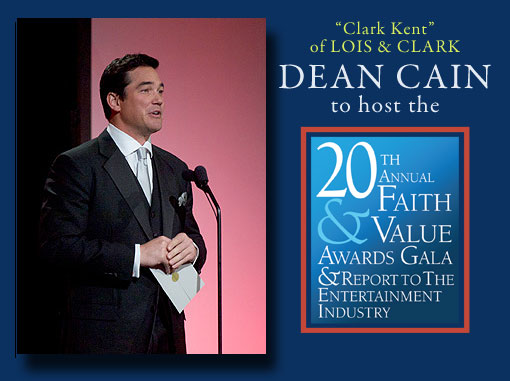 The Event set for Friday, February 10, 2012 at the Universal Studios Hilton Hotel Sets a Milestone with its 20th Anniversary Celebration Honoring Family Friendly and Inspirational Entertainment.

The Movieguide® Faith & Values Awards Gala and Report to the Entertainment Industry honoring family-friendly movies and television programs and spiritually uplifting entertainment has announced actor Dean Cain as the official host of the 20th Annual Awards show to be held Friday, February 10, 2012 at the Universal Studios Hilton Hotel in Hollywood.

“Dean Cain has one of the most faith-filled and blessed careers in the Entertainment Industry, so we are delighted that he will host,” says publisher and Gala founder Dr. Ted Baehr.

Dean Cain is most notably known for the role he played for four seasons as Superman in the TV series, “Lois & Clark:  The New Adventures of Superman. His other TV credits include “Beverly Hills 90210,” “Las Vegas,” “Smallville,” and the made-for-television movie “The Perfect Husband: The Laci Peterson Story.” He was host of the syndicated series, “Ripley’s Believe It or Not,” which his production company also produced. He has also been a presenter in the past for the Movieguide® Awards Gala.

The theme for this years’ event will be From Hollywood to Eternity. The star-studded Gala takes place just prior to the annual Oscar® Ceremony. Last year’s gala was taped and then later telecast on The Hallmark Movie Channel®.

Among the prestigious prizes and awards handed out that evening will be the $100,000 Epiphany Prizes (www.epiphanyprizes.com) for Inspiring Movies & TV, the $50,000 Kairos Prizes (www.kairosprize.com) for Spiritually Uplifting Screenplays by First-Time and Beginning Screenwriters, the Best 10 Movies for Families, the Faith & Freedom Awards for Positive American Values, the Grace Awards for Most Inspiring Performances in Movies & TV, and the Best 10 Movies for Mature Audiences, from teenagers to adults.

During the Gala, Dr. Baehr presents highlights of MOVIEGUIDE®’s comprehensive analysis of the major movies released in theaters to show entertainment industry leaders attending the Gala what kinds of movies make the most money at the box office and on home video.

Dr. Baehr is chairman of the Christian Film & Television Commission® (CFTVC) ministry and publisher of the Commission’s family guide to