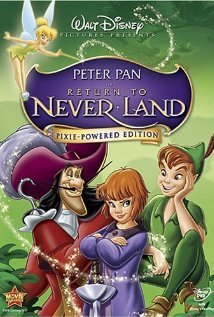 RETURN TO NEVERLAND begins with Wendy having to tell her children that they will be shipped off to the country tomorrow, for their own safety during the air raids. She encourages Jane to keep Danny comforted with Peter Pan stories each night, but Jane is angry about all the tall tales. That night, Captain Hook and his men show up at Jane’s window and whisk the little skeptic off to Neverland, where he uses her to bait Peter Pan, who makes a daring rescue. Still, Jane flatly declares her unbelief, the light in Tinker Bell begins fading, and Tinker Bell’s Pixie dust quits working – the only thing that can enable Jane to fly back home. Captain Hook offers to bring Jane back to London in his ship in exchange for Peter Pan’s treasure. Jane now has a choice to make.

RETURN TO NEVERLAND is a work of outstanding animation that will make everyone want to fly. We hope it will not diminish the greatest story of a true savior who will take us off to our true home one day, but otherwise, this is a fun, classic, acceptable adventure for all ages.

(Ro, B, V, M) Romantic worldview with characters controlled by emotions of the heart, rather than logic or any system of theological absolutes; moral elements include portrayals of a nurturing family with a strong, self-sacrificing, loving father & portrayals of true friendship vs. betrayal & the redemption of relationship with those formerly misjudged & continual references to faith & trust (though the object of faith and trust was never said to be God); no foul language, but body humor was rampant, such as burping, spitting in hands to shake with friends, etc. (absolutely delighting all in the audience under ten); mild cartoonish violence with Captain Hook’s men wielding swords & Nazi planes dropping bombs on England & maneuvering around magic flying ship & humorous octopus alternately catching & releasing Hook on several occasions; miscellaneous immorality by villains, with Hook’s men kidnapping Jane & whisking her off to Neverland, kidnapping Peter Pan and the Lost Boys, lying, & stealing, but clear consequences are portrayed.

RETURN TO NEVERLAND begins around the time of World War II, when Wendy is all grown up with two children of her own. Little Danny loves to hear his mother’s wild tales of the famous Peter Pan and the world of Neverland, but 12-year-old Jane is much too realistic and practical for such silly nonsense. Jane is too busy bravely traipsing through war-torn England to run errands with her dog, Nana II. Her father, Roger, a good and loving dad, has had to go off to war, and Jane feels a great responsibility to be brave for the family.

One night Wendy is particularly sad because she has to tell her children that they will be shipped off to the country tomorrow, for their own safety during the air raids. She encourages Jane to keep Danny comforted with stories each night, but Jane explodes in anger toward her mother for filling Danny’s head with tall tales.

That night, however, Captain Hook and his men show up at Jane’s window and whisk the little skeptic off to Neverland. Hook’s magic ship must maneuver past housetops, the River Thames, Big Ben and even incoming Nazi war planes before it makes it safely to Neverland. Once there, Captain Hook uses Jane to bait Peter Pan, who shows up for a daring rescue.

Though Peter takes Jane for an incredible ride through the sky (very reminiscent of Superman’s flight with Lois Lane), and though he introduces her to the wonderful Lost Boys and the jealous Tinker Bell, Jane still refuses to drop her skeptical shell and start believing. As she flatly declares her unbelief, the light in Tinker Bell begins fading, and her Pixie dust quits working. This is tragic, indeed, for Jane will need Pixie dust in order to fly and get back home to England; and, Tinker Bell’s very life is in danger if Peter and the Lost Boys cannot find a way to evoke some faith in their new friend.

To complicate the issue, Captain Hook (who now has an octopus after him that makes popping sounds), finds Jane and offers her a deal. He says that he’ll bring her back to London in his ship in exchange for the treasure that Peter Pan once stole. Jane agrees, signs Hook’s contract and cleverly figures a way to get Peter to take her to the treasure. At the last minute, though, Jane changes her mind and decides not to inform Hook, but it’s too late. Hook’s men are upon them, and they kidnap Peter Pan and the Lost Boys, bringing them back to the ship and tying them up.

Now, Jane must decide if and how she can rescue her friends and if and how to find and save Tinker Bell’s life. All depends on her ability to change and start believing. All depends on faith and trust . . . and pixie dust, of course.

RETURN TO NEVERLAND is a work of outstanding animation. Some of the scenes are so realistic, one forgets one’s watching a cartoon. Speaking of cartoons, the movie opens with a great five-minute or so cartoon of Pluto, which is a lot of fun.

The Peter Pan story is great, and this movie will, indeed, make you want to fly. (We will get to fly in heaven, right?) The story is tight, the characterization is very good, and the good lessons in the story are rampant.

One possible problem with children’s fantasy stories is that they may have the potential to diminish the greatest story ever told – the real story of a real savior who will come back for us one day and take us off to our real home, where our true citizenship lies. We encourage parents to talk with their children about this issue, perhaps to remind them that faith and trust are indeed most important, but the object of our faith and trust is in the Lord God and His son, Jesus, through the Holy Spirit. “For without faith, it is impossible to please God . . . but He is a rewarder of those that diligently seek Him.” (Hebrews 11)

One final note of interest. The original writer of the Peter Pan stories was Sir James Barrie, who gave the copyright to Peter Pan to the Great Ormand Street Children’s Hospital in London in 1929. Children of all ages will be forever grateful for his classic and imaginative work – now enjoyed by many generations.