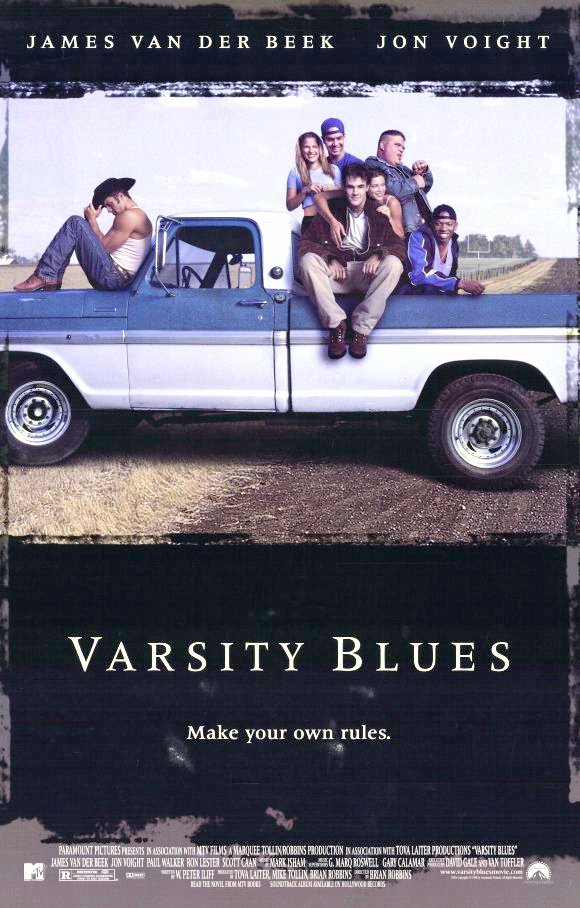 Right during the middle of NFL playoff season, VARSITY BLUES appears, a lean, mean, sexual, foul, and sometimes blasphemous story of high school football gone bad in a small Texas town that treats football like a religion and pays the price for it. This movie has a great amount of objectionable material including drinking, drunkenness and premarital sex.

Right during the middle of NFL playoff season, MTV partners with Paramount Pictures to distribute the lean, mean, sexual, foul, and sometimes blasphemous story of high school football gone bad in a small Texas town that treats football like a religion and pays the price for it. Starring DAWSON’S CREEK James Van Der Beek as a second-string quarterback who becomes a local hero, the movie also features a rag-tag group of supporting characters, and Jon Voight as a win-at-all-costs, man-the-torpedoes coach seeking his 23rd Divisional Title from the West Canaan Coyotes.

In West Canaan, young men play football, as older men cheer them. Young women are cheerleaders or football player’s girlfriends, and older women are moms or supporters. Parents expect nothing less than gridiron perfection and are emotionally dependant on their sons’ success or failure. Coach Kilmer (Jon Voight) prides himself on 35 years of coaching, with 22 divisional titles. He is mean, tough and demands absolute loyalty from his team. During one game, star quarterback Lance Harbor (Paul Walker) is not blocked properly by fat linesman Billy Bob (Ron Lester), and Lance completely twists up his knee. Lance is out for the season. Filling his shoes is second-stringer John Moxon (James Van Der Beek), an under-appreciated passer who quickly demonstrates his able capabilities.

With fine appearances on the field, Moxon, or Mox, is getting a lot of attention from the coach, his schoolmates, but especially Darcy (Ali Larter), Lance’s former girlfriend. Of course, this doesn’t make Mox’s current girlfriend, Julie (Amy Smart), very happy. As the divisional championship game nears, the class undergoes sex education, Coach Kilmer increasingly blames Billy Bob for screwing up, team members visit a strip club where they see a teacher bare all, and Billy Bob gets drunk and vomits. When it becomes apparent during the final game that Coach Kilmer doesn’t care about his team, but only the title, Mox stages a protest and proceeds with the game in a most unconventional way.

This movie has a great amount of objectionable material. Despite the fact that the town is viewed as a Christian community, where the Lord’s Prayer is uttered and the players thank God on TV, all the people live like the devil when the spotlight is off. Clearly, parents and the townspeople are making idols out of mere fallen teenage boys. These boys, most only 17 or 18, drink heavily and visit a strip club. In perhaps a plausible scene today, a sexy female teacher makes the boys speak out sexual terms to make them appear more common and acceptable in a sex education class. Most teenage boys here are sexually active, though some may be steady with a single girl. One, a goof named Tweeder, has sex on the brain all the time. Another, receives a special whipped crème bikini from a more than willing cheerleader. Only Mox shows any sexual restraint.

In a very rude series of images, Mox’s younger 11-year old brother reacts to the cult of football by making a perverse search for his own religious needs through undergoing a series of explorations through world religions. First, he straps himself to a cross to be like Christ, then he becomes an Orthodox Jew and finally he starts his own cult. Played as comedy, these scenes smack of blasphemy, offending all religions involved.

While the ultimate message of dethroning idolatry is given, much of the movie revels in the crazy antics of these boys, and shows how they have profited, as well as cursed, from misplaced allegiances. Like the recent CAN’T HARDLY WAIT, it shows drinking, drunkenness and premarital sex as common for today’s teens. Gone are the relatively virginal John Hughes teen pics such as PRETTY IN PINK and SOME KIND OF WONDERFUL.

Starring hot item James Van Der Beek, this movie may do well at the box office, but last year, THE SIXTH MAN was released during March Madness College Basketball playoffs and sank. It seemed more people wanted to watch the real thing, rather than a goofy dramatization of a fictional team. With that in mind, VARSITY BLUES may score, or get tackled.