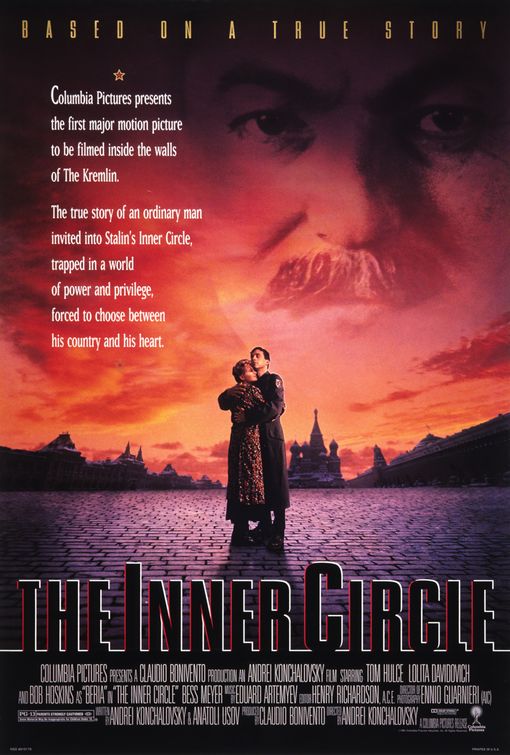 THE INNER CIRCLE is an outstanding blend of historical epic and personal drama, depicting a young man's brief gains and tragic losses while serving as a film projectionist for Josef Stalin. Despite some scattered objectionable language, there is much to be learned from this film regarding personal responsibility and the folly of socialist statism.

(LL, S, V) 14 obscenities, 1 profanity; one on-screen sexual encounter (but between newlyweds, without nudity); man violently strikes his head against a wall; and, sexual immorality implied.

While dozens of post-World War II movies have vividly portrayed the horrors of Nazi Germany, very, very few have broached the subject of Josef Stalin’s reign of terror in the Soviet Union. That deficit has now been remedied in grand style by writer/director Andrei Konchalovsky in THE INNER CIRCLE, a fact-based masterpiece filmed entirely on location (including sequences within the walls of the Kremlin). By dramatizing fifteen years of demonic manipulation of an entire people through the experiences of a single family, Konchalovsky has managed to blend grand scale and personal tragedy into a compelling cautionary tale.

Ivan (Tom Huice) is a young film projectionist serving at KGB headquarters in 1938, a naive enthusiast for the glories of the “worker’s paradise” and its ruler Stalin, whom he calls “The Master.” His spirits are buoyant even in the face of his wretched living conditions in a run-down apartment (situated near a slaughterhouse) and the sudden arrest of his Jewish neighbors who have been deemed “enemies of the people.” The latter, both husband and wife, are spirited away during terrifying raids which leave their four-year-old daughter, Katya, an orphan.

This is of little concern to Ivan, newly married to the beautiful Anastasia (Lolita Davidovich), until he himself is hauled into the Kremlin in the middle of the night. As it turns out, his projectionist skills are needed for an impromptu showing for Stalin himself. The dictator (like Hitler) was a great fan of movies (especially American escapist fare), which he enjoyed in a sumptuous screening room with his cronies and attendants. Ivan is both thrilled and terrified. He is an expert with the equipment, but what if something goes wrong?

However, the midnight movie is called off, though he is ordered back the next day. When he finally shows “The Great Waltz” for the Soviet heads of state and receives a mild compliment from Stalin himself, Ivan is delirious with joy. He lands a permanent job as the Kremlin’s official projectionist, with a pay raise and the opportunity to rub elbows with the Communist Party heroes. Despite the undercurrents of utter terror which pervade the amiable conversations in this rarefied atmosphere, merely being present is a dream come true, and Ivan devotes himself to it with childlike zeal.

Meanwhile, in a harrowing sequence worthy of Dickens, Anastasia seeks out little Katya in a state-run orphanage. They struggle to continue a secret relationship which provides the only semblance of human kindness experienced by the child over several months. When Ivan finds out, he is mortified, because since the girl’s parents were purged by the Party, she should be shunned. In a telling conversation, Ivan asks his wife whether she loves him or Katya the most. “You,” she replies. Anastasia then asks Ivan whom he loves the most: her, or Stalin? Ivan doesn’t hesitate: “Stalin.”

This capacity of the ordinary Russian citizen to feel such unquestioning awe and devotion for a tyrant is a recurrent theme in THE INNER CIRCLE. Stalin cultivated these emotions and was thus able to seduce an entire culture while at the same time decimating it. Indeed, an elderly character later notes that the Russian people would either follow God or Satan without reservation; and, for the time being, Satan was firmly in control of the Kremlin.

Ivan’s naive subservience ultimately leads to his wife’s undoing at the evil hands of KGB boss Beria (Bob Hoskins, in a small but riveting part). Only when Anastasia is damaged beyond repair does he slowly realize that they have both been cruelly exploited. Though he loses his wife, Ivan years later is able to take redemptive action on behalf of Katya, whom Anastasia loved so dearly.

THE INNER CIRCLE is at once fascinating history, intense drama, and above all strong warning of the folly of idolatry–in this case, the worship of a political leader as a secular god. Despite some scattered objectionable language, it should be seen by as many Americans as possible, especially teens, who hopefully will gain some appreciation for the personal freedoms they may take for granted. Moreover, it teaches unflinchingly that esteeming any man or government above God is a sure route to chaos and disaster.