BORN ON THE 4TH OF JULY 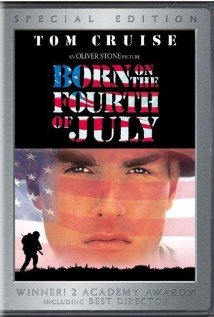 Inspired in part by his own autobiography, BORN ON THE 4th OF JULY spans two decades of Vietnam veteran Ron Kovic’s life. Opening on July 4th, 1956, Ron is watching a patriotic parade as he celebrates his tenth birthday in his hometown of Massapequa, N.Y. Raised in a patriotic, Catholic family, young Ron sees the military as the road to glory.

Ron’s mother is an intensely religious woman who tells Ron to do his best. “That’s what matters to God,” she says. Filled with his parents ideals and morals, he is proud to be a Marine and considers it his patriotic duty to fight. Even his mother thinks that it’s God’s will for him to go. Moreover, he is convinced that he will find his manhood in Vietnam.

As Ron prays privately about going to Vietnam, he asks God to help him make the right decision. Jumping from the high school prom to the battlefield, the horrors of war are depicted for the next 17 minutes. He accidentally kills one of his own, then is hit by enemy fire which paralyzes him from the chest down.

Sent to recuperate in a Bronx VA hospital, Ron endures rehabilitation in difficult-to-watch scenes composed of rats, drugs and whores. He struggles to accept his paralysis. His family life is a sickening, ceaseless debate about the war as he questions their old values and patriotism. Ron lapses into alcoholism, and in one wrenching scene, lashes out at his mother.

Ron retreats to Mexico where other maimed veterans have gone to escape their problems and gets involved with drugs and prostitutes. To ease his guilt, Ron returns to the U.S. and confesses to the family of the fellow soldier he killed. By this time, he has made a complete turn-around, so he slips into the 1972 Republican National Convention as an angry, bitter anti-war protester.

Ron Kovic himself has said the film is about turning defeats into victories, losses into gains. This is a great premise, and a biblical one, but in the film the premise is proved in a vacuum, without any real reliance on God, the only One who can give us victory.

Extremely one-sided, the movie says that the Vietnam War was wrong, and doesn’t give anything but an emotional basis for its position. The realities of war are horrible. However, in his classic study on the dynamics of war, the renowned author Clausewitz recognized: “Kindhearted people might… think there was some ingenious way to disarm or defeat an enemy without too much bloodshed, [but] pleasant as it sounds, it is a fallacy that must be exposed… It would be futile, even wrong, to try and shut one’s eyes to what war really is from sheer distress at its brutality.”

The film makes the point that the Vietnam War did not have the support of the American people, which had a dramatic effect on how we fought the war, yet fails to mention that had the bombing of North Vietnam not been stopped due to public pressure, the United States might have won the war. This is a major weakness of the film, but then Hollywood is known for propagandizing issues. Indeed, the film’s credits end with: “In Memoriam, Abbie Hoffman.”

Ideological flaws aside, the film in a technical sense is spectacular, gripping and very intense. Please note, however, the offensive elements of language, violence and nudity listed above. Powerful and emotionally intense, I wept during some of the war scenes. What a tragedy, though, that Ron’s anger and frustration saturate the picture, and he never reconciles with his parents. One can’t help but compare him to Joni Eareckson Tada, and the very different way she dealt with her paralysis. Joni understands the sovereignty of God in adversity in a way that Ron Kovic does not.

Captain Jeremiah Denton’s story would make a better Vietnam film. Shot down in 1965, he spent seven years in a POW camp, yet made the following statement, “We are honored to have had the opportunity to serve our country under difficult circumstances. We are profoundly grateful to our Commander-in Chief and to our nation for this day. God bless America.”

It’s possible that BORN ON THE 4TH OF JULY will win several Oscars. However, your time would be better spent reading Jeremiah Denton’s WHEN HELL WAS IN SESSION, or one of Joni’s books, or the Book of Job. We need to understand the sovereignty of God. This film will not help you understand it, but God’s Word will.