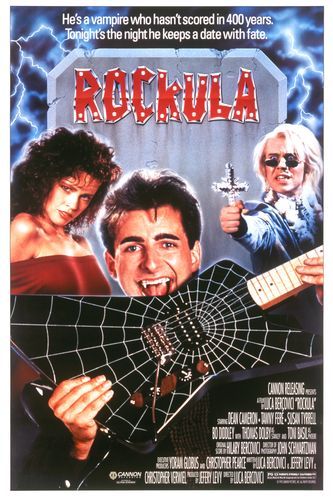 Occultic themes of reincarnation and spiritism; profanities and obscenities, including pornographic song lyrics; sexually lewd dances and dialogue; and, references to fornication and death.

Ever since he met her in the 17th century, teen rock-star Ralph, who also happens to be a 300-year-old vampire, has been in love with Mona. At that time, Ralph and Mona’s pirate boyfriend battled to the death for Mona’s affections. Unfortunately for Mona, she was killed by one of their swords while trying to stop the fight.

Since then Mona has lived 19 times, always dying on Halloween night in her 22nd year at the hands of her jealous pirate lover, who also can reincarnate himself. Each time Ralph falls in love with Mona, however, her jealous boyfriend prevents them from marrying by killing her.

Now, in 1989, Ralph again meets Mona, who is a beautiful 22-year-old singer in a local rock band. Determined not to fall for Mona again, he eventually is smitten with her anyway and forms his own band called “Rockula” in order to get her to notice him. Sure enough, Mona’s manager boyfriend sees Mona and Ralph lusting after each other and decides if he can’t have Mona, no one else will either. Dressing as a pirate for the upcoming Halloween party, he plans to kidnap Mona, club her over the head and place her in a cryogenic suspension forever. The film reaches its predictable conclusion as hero Ralph rushes to the rescue.

Christians should stay away from ROCKULA, which really is nothing more than a music video with pornographic lyrics. It is intended to appeal to the raging hormones of adolescent boys, as the women are frequently seen exploiting their bodies by wearing provocative costumes and performing sexually lewd dance routines. There are occultic themes of reincarnation and spiritism which God abhors; one flyer reads “I’m pregnant with Satan’s baby.” Near nudity occurs several times, there are sick humorous references to death that are not funny, and profane, obscene language litters the sexually suggestive dialogue.