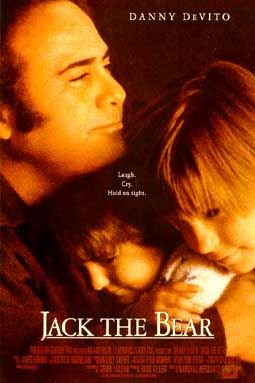 JACK THE BEAR tells the story of a single father raising two young sons in 1972 California. The movie, while having potential, fails because of "gaps" in telling its story. De Vito's character comes across as too intense, too unbelievable, but Robert Steinmiller, Jr., as Jack, does an excellent acting job, as does three-year-old Miko Hughes in his portrayal of Dylan.

(H, LLL, V, A/D) In excess of 15 obscenities & 15 profanities; some fist-fighting violence & scenes of one person stalking another; and, alcohol abuse by film father.

Set in 1972 California, JACK THE BEAR tells the story of a single father, John, and his two young sons, thirteen-year-old Jack, and three-year-old Dylan. John works as the “monster of ceremonies” on MIDNIGHT SHRIEK, a late-night TV program featuring old monster movies. John loves his sons but struggles with accepting responsibility. He is the favorite playmate of the neighborhood kids; however, his sons wish their Dad would “grow up.” To deal with his anxiety, he drinks frequently, to the point where his job is threatened. The boys face another danger from Norman, a potential child molester. Jack, the adolescent son, struggles with coming to terms with heartbreak and the difficulties of growing up with a single parent while his father tries to come to terms with himself and taking responsibility for his sons.

The film has potential but fails to deliver because of “gaps” in telling its story. Something is missing. De Vito, as John, comes across as too intense, too unbelievable. Perhaps he has been miscast. Robert Steinmiller, Jr., as Jack, is to be commended for an outstanding job. He not only struggles with achieving his own maturity, but his father’s as well, and also acts as a father to little Dylan. The Leary family needs to have Jesus Christ in their home: “Except the Lord build the house, they labour in vain that build it” (Psalm 127:1). JACK THE BEAR, once more, offers problems without solutions.

Producer: Steven Zaillian BASED ON THE NOVEL BY: Dan McCall