"A Documentary With Important Theological Implications" 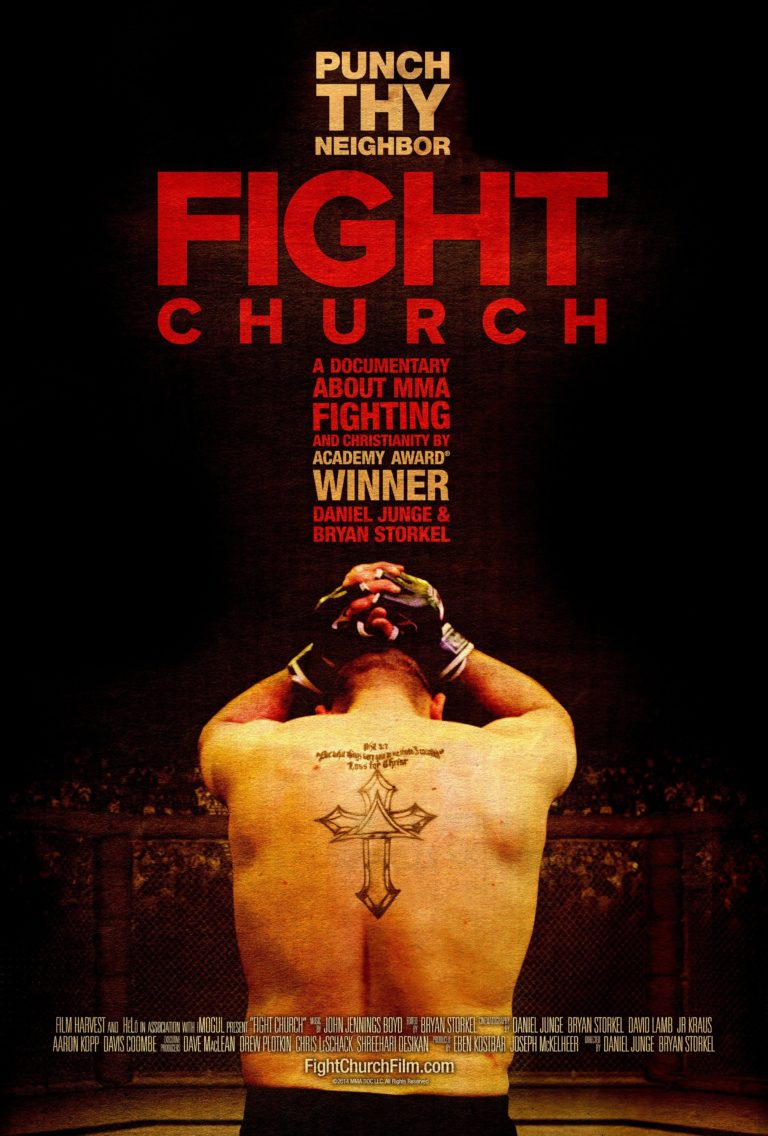 FIGHT CHURCH is a documentary that follows pastors and ministry leaders who participate in the sport of MMA (Mixed Martial Arts) fighting. On the surface, the movie deals with their desires or struggles to live out the Gospel through their passion of MMA fighting. Where the movie really excels is exploring the spiritual, cultural and even theological battle that’s taking place in America through these men. These pastors’ views on MMA are far from popular, however. One New York priest speaks out passionately against the sport and any Christian who endorses MMA fighting.

These opposing views are portrayed in a context much greater than the sport itself. How are Christians to live out the Gospel in every area of life? What does it mean to be a godly man of strength, gentleness and self-control? What is our duty concerning the attacks of the enemy spiritually and culturally? In a fascinating way, these topics are addressed and the Gospel is uplifted in a biblical way honoring God. A caution is advised for FIGHT CHURCH due to the intense MMA fighting scenes.

(CCC, BBB, L, VV, N, D) Very strong Christian, biblical worldview encouraging people to live out the Gospel with love, passion and vigor and to make Christ’s name be known everywhere, along with this are some differences of interpretation of the Bible regarding the sport of Mixed Martial Arts (MMA) fighting; a man calls a pastor Bada**, plus man vomits while training; some intense MMA fights that result in bloody or broken noses, black eyes, lots of punching and kicking, even by children, and sometimes violent language is used, like “I’m going to rip their head off”; no sexual content; upper male nudity, some women in bikinis at secular fight arenas; man mentions his mother was a substance abuser; and, nothing else potentially objectionable.

The first rule of FIGHT CHURCH is that it should be discussed. FIGHT CHURCH is a documentary that follows pastors and ministry leaders who participate in the sport of MMA (Mixed Martial Arts) fighting. On the surface, the movie deals with their desires or struggles to live out the Gospel through their passion of fighting. Where the movie really excels is exploring the spiritual, cultural and even theological battle that is taking place in America through these men.

Paul Burress is a pastor in Rochester, NY. Though his fighting days are behind him, he still coaches young boys and men in Mixed Martial Arts, using it as a ministry tool. He actively works to make MMA fighting legal in New York, one of the last states to pass legislation allowing it on a professional level. Preston Hocker from Norfolk, Va., pastors a church with his father. Participating in wrestling from a young age, Preston got into MMA and fights alongside preaching, even opening up a fight club in the church as an opportunity to reach out to unbelievers and disciple young men. Along with Pastor Nahshon Nicks from Florida and a few other preachers, professional fighters and ministry leaders, each person shares their outlook on the sport and how it intersects with their Christian faith.

These pastors’ views on MMA is far from popular, however. New York City Priest John Duffell is actively opposed to MMA and meets with legislatures to keep it illegal. He firmly states that cage fighting is not about loving each other, and, as Christians, it’s not something we are called to do. One former UFC fighter who’s a professing Christian even states that the Gospel of Jesus and the sport that he loved cannot be reconciled, and is thus inappropriate for believers. The question is asked, can you really love your neighbor as yourself and punch them in the face?

These opposing views are portrayed in a context much greater than the sport itself. The theological and hermeneutical interpretation of Scripture on this topic has important implications for Christians. How are we to live out the Gospel in every area of life? What does it mean to be a godly man of strength, gentleness, meekness, and self-control? What is our duty concerning the attacks of the enemy spiritually and culturally? Can a Christian be a professional boxer? Should a Christian play football? FIGHT CHURCH addresses these issues from varying viewpoints fairly, though the movie seems to be most favorable to the more theologically centered and balanced interviewees, including Paul Burress.

Some, like Pastor John Reaken, seem to have a one-size-fits-all view of masculinity. While he points out that our culture has feminized men, the solution isn’t belittling or callousing young boys into testosterone fueled, gun blazing, truck driving men. The answer is to disciple and nurture boys into men of love, strength and meekness. Paul Burress seeks to live this out in his ministry and to pass it down to others. It’s stated that meekness isn’t weakness, it’s controlled strength. Some argue that MMA isn’t “violence” by definition. Instead, they argue, it’s merely two men testing their strength with no intent to maliciously injure the other contestant. It’s clear that Paul and some of the other Christians fight in a manner that looks different than the rest of the world.

While opinions vary on the sport, Pastor Burress and Pastor Hocker rightly relate their fighting attitude to the spiritual battle that’s taking place in the world. One pastor references Matthew 16:18, “On this rock I will build my church, and the gates of hell shall not prevail against it,” as a call for Christians to no longer wait for attacks, but to storm evil itself with the light of the Gospel.

By the end, the debate over the sport nearly seems inconsequential to the heart and passion these pastors and athletes have for using their gifts to further the Kingdom of God. Furthermore, many of these men ground themselves in God’s Word, choosing to let God alone be their standard. So, whether you agree or not with their conclusion about MMA, their devotion to God and His Word is commendable.

FIGHT CHURCH is well filmed and very well edited, but it’s not a movie for everyone. There are some intense cage fights that aren’t easy to watch. That being said, the topics presented are important, and the Gospel is uplifted.