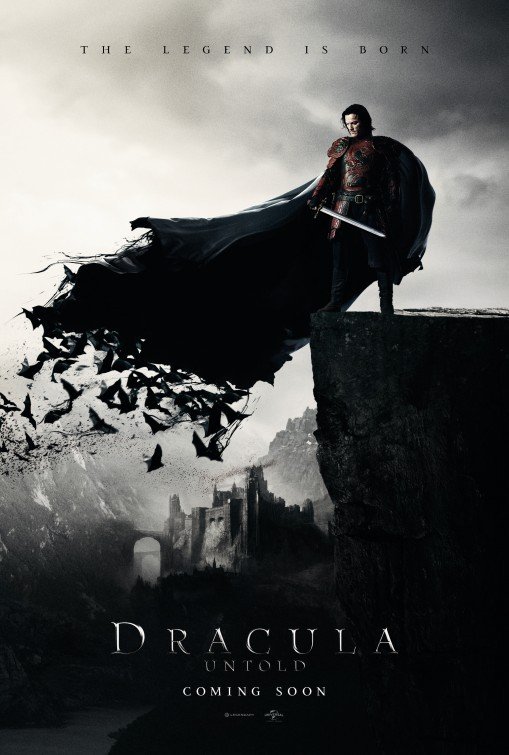 DRACULA UNTOLD is an action horror movie that creates a new origin story for the legend of Dracula, the vampire made famous by Bram Stoker. Set in the 15th Century, it tells the story of a Christian prince, Vlad Dracul, aka Son of the Dragon. A member of the Order of the Dragon, a real-life group of Christian knights in Southern Romania, Prince Vlad, his family and their people are threatened by the evil sultan of the invading Turkish Muslims. Vlad makes a deal with a powerful vampire to give him the power to defeat the invaders. The deal comes with a price, however.

DRACULA UNTOLD is filled with action and many scary horror moments dealing with vampires. The action bits are pretty good, and the horror moments have their scares. Also, viewers will side with the tragic Christian hero’s efforts to free his people and family from the evil Turkish Muslims. At one point, Vlad even prays to Jesus. However, extreme caution is advised because of the violence in DRACULA UNTOLD and its strong occult elements featuring vampire attacks and legends.

(Pa, CC, OO, BB, L, VVV, S, N, A, M) Light mixed pagan worldview with strong positive Christian elements dominant but mixed with strong occult ideas dealing with vampire mythology and being cursed, with a solid, morally positive content exposing the evils of the oppressive Muslim Turks who ravaged Europe during the time of Vlad III the Impaler, a national Christian hero of Romania, who fought against the spread of Islam; one “h” word; very strong, sometimes scary violence with some blood includes scary vampire attacks, scary masses of flying bats, man drinks vampire’s blood and then creates other vampires, vampires killed by sunlight, images of many impaled soldiers, images of corpses and skeletons, scary vampire creature lurking in the shadows attacks and kills two men, vampire cuts man with knife and licks the blood to menace him, man with vampire powers wades through soldiers on the battlefield, giant masses of bats attack army, war fighting with swords, man tries to save woman falling from a great height, Muslims have whipped captive children they’re turning into soldiers, fight to the death between tragic hero and villain, hero kills henchmen and his men by the sword, etc.; man and his wife are kissing passionately in bed, but he has to leave, plus some other, more chaste kissing, and implied vampire lust; upper male nudity; implied alcohol use in one scene; no smoking or drugs; and, vampire people drink blood, Muslim sultan wants children as hostages, images of hostage children under the thumb of Muslim army, but rebuked to a certain extent, and some revenge that’s not rebuked.

DRACULA UNTOLD is an action horror movie that creates a new origin story for the legend of Dracula, the vampire made famous by Bram Stoker’s classic horror novel. Though any real connection to Stoker’s novel hasn’t been proven, DRACULA UNTOLD uses the Romanian story of Vlad the Impaler, a Christian prince in 15th Century Southern Romania who was held hostage and often whipped as a youth by the Turkish Muslims from the Ottoman Empire who controlled the area. Later, Vlad fought against these Muslim invaders. He became known as Vlad the Impaler, mostly because he reportedly impaled up to 100,000 Turkish Muslims during the wars against them at the time.

DRACULA UNTOLD fictionalizes this history to create an action adventure experience with horror elements. Reportedly, the movie is the first in a series of movies from Universal Pictures to reboot the Dracula story and its other monster characters, such as Frankenstein and the Wolfman.

As the movie opens, Vlad has fought against the Turkish Muslims after being held hostage by them and trained to be a soldier. The Turks had forced Vlad’s father to offer Vlad as a hostage in order to assure his father’s loyalty. Vlad and his wife have a son. Vlad’s people and the Turks have established an uneasy peace whereby Vlad has to pay a tribute to the new sultan, Mehmed. Meanwhile, the Turks have agreed not to take any more young Romanian hostages.

The first scene shows Vlad and his men finding a Turkish helmet in a stream. They figure it’s a sign of a Turkish scouting unit. Vlad thinks the helmet has washed downstream from the mysterious Broken Tooth Mountain. Vlad takes two men to the mountain to explore. There, they find a cave with skeletons of what look like many Turkish soldiers. A monster with a human face lashes out at Vlad and his men. Vlad barely escapes with his life, but the two men are killed.

Vlad returns to his castle to greet his beloved wife and young son. He’s reluctant to speak about his encounter with the monster to his wife, who notices the scars on Vlad’s back from years of being whipped by the evil Turkish Muslims.

During the annual Easter celebration at Vlad’s castle, the young sultan comes to Vlad’s castle to accept his annual tribute, a trunk or two filled with silver coins. The sultan informs Vlad he wants to re-institute the policy where the Turks demanded that the Romanians surrender their sons to the Turks as hostages, to be trained as soldiers and fight in the other wars the Muslims are always fighting.

Vlad’s advisors urge him to surrender his people’s sons to the sultan because the Turks have many more soldiers than they do. Vlad reluctantly agrees, even when the sultan demands that Vlad hand over his own young son. “You’re a virile guy,” the young sultan mocks Vlad. “You can father more sons.”

Sadly, Vlad and his wife meet the sultan’s henchman in an open field to surrender their son. The son bravely tells his father he’s ready to sacrifice himself to help his father and their people. His son’s bravery pricks Vlad’s heart and conscience. Instead of surrendering his son, Vlad kills the sultan’s henchmen and the several other soldiers meeting Vlad and his family.

Vlad tells his family to return to their castle. Meanwhile, Vlad goes to the monster in the cave, thinking the monster has some kind of special power to help him kill many Turks. Sure enough, the monster turns out to be a powerful vampire. The vampire speaks of the power he has, but says his condition is also a curse. He agrees to turn Vlad into a vampire, but tells Vlad that the curse will disappear in three days, but only if Vlad resists the desire to drink human blood during that time. So, Vlad only has three days to defeat the sultan and his large army.

Will Vlad be able to defeat the sultan and save his family and their people? Will he be able to resist the blood lust of the vampire curse?

The filmmakers behind DRACULA UNTOLD have turned the Dracula legend into a tragic story, much like that of the Wolfman and Dr. Frankenstein’s misunderstood monster in the old Universal Pictures movie classics. Before the tragic twists at the end, however, the new movie is filled with lots of action and many scary horror moments dealing with vampires and bats. The action bits are pretty good, and the horror moments have their scares. Also, viewers will side with the tragic hero’s efforts to free his people and his family from the evil Turkish Muslims. At one point, Vlad even prays to Jesus to help him resist the power to drink human blood.

That said, the movie could have done better at evoking the emotions inherent in their story. Luke Evans as Vlad does really well with his meaty title role, but the actors playing Vlad’s wife and son and those playing the villains aren’t given enough meat to create something more captivating for the audience. Perhaps the filmmakers should have looked to something like Christopher Nolan’s origin story in BATMAN BEGINS, which has a lot more depth to it.

The good news, however, is that the filmmakers have inserted a strong Christian background into the story of Vlad the Impaler. Though fictionalized, this background fits the real-life historical figure and his time. The movie also reflects the true evil that the Ottoman Empire and the Turkish Muslims created in many parts of the world. Thus, while the Vlad in DRACULA UNTOLD is a bit nicer than the Vlad of History, this movie’s story shows a tragic Christian hero who succumbs to darkness and eventually is overcome by it. Even so, he does defeat the bad guys and tries to do the right thing at the end. A short final scene set in modern times suggests a possible sequel that may be interesting enough to watch.

However, extreme caution is advised for DRACULA UNTOLD due to the violence and the scary horror elements. Also, the movie’s positive Christian content is combined with the occult elements in the vampire legend of Dracula that the filmmakers are trying to exploit.