MY LITTLE PONY: THE MOVIE 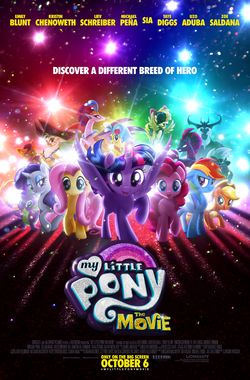 MY LITTLE PONY: THE MOVIE is a fun adventurous animated movie. Princess Twilight, the princess of friendship, and her friends must rally together to save their home of Equestria after it’s been seized by the evil leader, the Storm King. They must travel across the land to ask help from the only person one who can give it, Queen Novo. They realize they have to do things themselves. So, they call upon the friends they’ve made along the way to have a fighting chance against the Storm King and his army. Encountering many obstacles, the group soon learns that showing people love and friendship gets them much further than anything else.

MY LITTLE PONY: THE MOVIE can easily be enjoyed by viewers of all ages. Catchy songs and clever jokes reel viewers into the story. Filled with talented singers and voice actors, this movie has an entertainment quality that will keep the viewer interested until the very end. Best of all, MY LITTLE PONY has a strong Christian, moral worldview centering on the power of love, self-sacrifice and friendship.

(CC, BB, O, V, M) Strong Christian, moral worldview where the magic of love, friendship and sacrifice overcomes evil and rescues the people you love, an enemy repents and sacrifices himself to save the ponies, mitigated by some occult magical elements; no foul language; light violence present, as there is a battle between the ponies and the Storm King, but no blood or intense violence; no sex; no nudity; no alcohol; no smoking or drugs; and, light miscellaneous content such as Princess Twilight is seen at the beginning of the movie meditating to calm herself down before a big presentation, the princesses have magical powers, but they use them for good and for helping their fellow ponies, brief moral relativism (one of the main characters attempts to steal something she needs, but she does it in order to save everyone in her home, but she fails and is punished for the attempt), and examples of kidnapping, lying and manipulation, but rebuked.

MY LITTLE PONY: THE MOVIE takes viewers on a magical adventure beyond the land of Equestria, after the home of the ponies, Ponyland, is threatened by an evil leader named the Storm King.

The Storm King needs to capture the four princesses of Equestria in order to possess their power and become the ruler of the land. Three princesses are taken right before the major Friendship Festival, but Princess Twilight manages to escape with some of her friends. She overheard one of the princesses say they needed to go to see Queen Novo to get her help. Princess Twilight knows that this is now her mission: to find Queen Novo and save her fellow princesses, as well as restore peace to her home of Equestria. Throughout this great adventure, her and her friends encounter many characters along the way, including a swindling fox, pirates who have lost their mojo and a young, lonely girl just eager to have someone to befriend.

After many hardships and roadblocks along the way, Princess Twilight and her friends finally make it to the top of the mountain where the Queen lives, only to find it completely deserted. When they’re sucked into a pool nearby, they begin to believe all is lost until they find a new underwater friend who takes them to the Queen.

The entire population has relocated underwater in order to escape the Storm King after he attempted to wipe them out. They find that Queen Novo is in possession of a pearl that would help “every pony” in Equestria live. However, when she’s unwilling to relinquish the pearl to Princess Twilight, Twilight takes it upon herself to attempt to steal the pearl in order to save her home. Because of this act of treason, they are banished from the underwater dwelling with very little hope left of saving Equestria. Princess Twilight and her friends have to rally together, bringing every ounce of magic they have left, in order to continue their mission and save the princesses and the land of Equestria.

MY LITTLE PONY: THE MOVIE is peppered with fun, energetic songs sung by fantastic actors such as Kristen Chenoweth, Emily Blunt and Uzo Aduba. This movie is enjoyable and has something to offer for an audience of all ages, with witty jokes and catchy lines. This movie centers around the value of friendship and love above all else. When the actual magic fails the ponies, love, friendship and sacrifice is there to help them. Dominated by a positive Christian, moral worldview, MY LITTLE PONY ultimately expresses the idea that enemies can be friends if shown mercy, and that there’s no greater love than sacrificing one’s life for another. Parents should discuss these themes with their younger children if they decide to let them see this movie.

Watch MY LITTLE PONY: THE MOVIE: