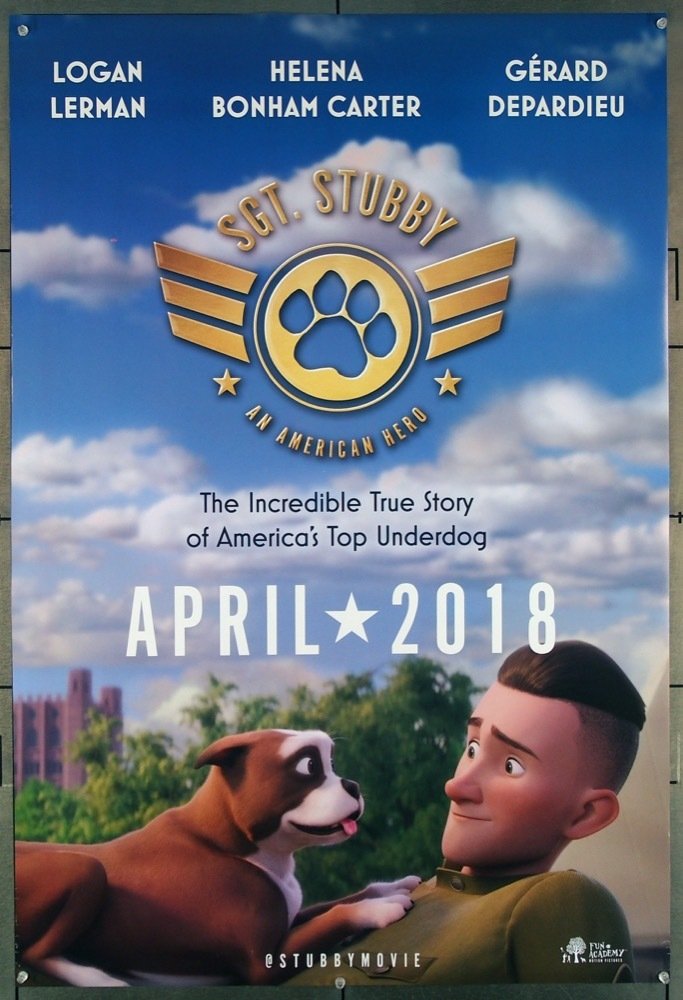 SGT. STUBBY: AN AMERICAN HERO is the remarkable true story of the most decorated war dog in United States history. It chronicles the adventures of a courageous Boston terrier and his owner during World War I. At an army base, Stubby befriends a young private named Robert Conroy. Stubby proves his endurance and seems to be unafraid of gunfire. He sneaks onto the troop transport carrying Robert to France. There, Stubby distinguishes himself on the battlefield while accompanying R Robert.

SGT. STUBBY has a strong emotional heart, with lots of historical background and patriotic stories of bravery. Children will love Stubby, from his adorable mannerisms, the way he salutes with his little paws, and, of course, his unshakable courage. Adults will find the historical context quite fascinating. However, the presentation and pace are uneven, and the script, narration and dialogue are sometimes on-the-nose. The movie tries to balance the intensity of the battles and some scary images with lighthearted moments but doesn’t always succeed. MOVIEGUIDE® advises caution for younger children, but SGT. STUBBY sends strong messages of courage, patriotism and bravery.

(BB, C, PPP, VV, A, D):
Dominant Worldview and Other Worldview Content/Elements:
Strong moral worldview extols courage, hope, bravery, and redemptive sacrifice, with very strong themes of patriotism depicted by the Yankee division in World War I;
Foul Language:
None;
Violence:
Intense cartoon sequences of war include soldiers being shot, gunfire, explosions, grenades, running through gunfire, and numerous soldiers are wounded experiencing battle wounds (although no blood is shown), plus several sequences involve gas attacks and training for gas attacks and soldiers running with gas masks, which could be scary to children;
Sex:
None;
Nudity:
None;
Alcohol Use:
A French soldier drinks wine while an American soldier insists it’s against the rules;
Smoking and/or Drug Use and Abuse:
A French soldier puts a pipe in his mouth but doesn’t actually smoke; and,
Miscellaneous Immorality:
Nothing else objectionable.

Set during World War I, SGT. STUBBY: AN AMERICAN HERO is an animated adventure movie for families. It follows a stray Boston terrier, who sneaks his way onto a Yale Army training base and becomes part of the American war effort in Europe.

At the army base, Stubby befriends a young private named Robert Conroy. It isn’t long before Stubby proves his worth in basic training, proving his strength, endurance and courage as he leads the pack of running soldiers and seems to be unafraid of gunfire.

When the Yankee Division ships out to Europe to provide relief for the French division, Stubby stows away on the ship and proves his worth on the battlefield as well. From clearing the trenches of vermin, to sniffing out hidden enemy soldiers, to digging out troops from rubble, to warning the soldiers and the neighboring French town of an incoming gas attack, it quickly becomes clear that a dog is also man’s best friend on the battlefield as well. However, when Robert gets recruited to help the French spy behind enemy lines, Stubby’s bravery is put to the test as he tries to help the Allies win the war.

The moves of the company and the overall story is narrated by Robert’s sister, voiced by Helena Bonham Carter. Since Robert himself isn’t narrating, it creates the question of whether or not he survived the war, which is a welcome source of conflict and intrigue throughout the film. While the narration provides interesting historical context, it often interrupts the story with varying animation styles and documentary-style fact-spouting. While it’s nice that the narration provides context and due diligence to the story’s historical background, it would have been better if this information had been worked into the actual story somehow.

That said, children will love Stubby in every way, from his adorable mannerisms, the way he salutes with his little paws, and, of course, his unshakable courage. Adults will find the historical context quite fascinating. Learning about the war, especially all of the ways that Stubby proved himself exceptionally useful and courageous, is truly fascinating and entertaining to watch. Robert constantly faces adversity from men in the army who don’t want to feed or care for Stubby because they say he’s “just a dog,” yet time and time again Stubby actually saves lives and sometimes an entire town. Any history buff will be intrigued by the movie. Regardless of whether or not they’re history buffs, children and parents alike will be drawn to the story’s emotional heart.

Parents should exercise caution, however, when taking young children to see this film. There’s a substantial amount of cartoon war violence throughout the movie, with realistic gunshots, explosions, and intense fighting sequences. Although there isn’t any blood or gore, there are several instances of soldiers being wounded and suffering depicted on their faces. The gas masks used during WW1 are inherently frightening, and any scene involving the masks or gas attacks manages to be quite haunting. Younger children expecting a “cute dog movie” could potentially be disturbed by these images or find the intensity of the war battles too much to handle.

At the same time, everything about the story overflows with heart and charm. Several lighter scenes are peppered throughout to give the audience a respite from the war. In fact, many times the narration takes over and skips over entire battles completely. This tone is exceptionally hard to balance and often the story fluctuates unevenly between silly canine moments, heartfelt charm and the brutality of war. The movie works best as a collection of anecdotes about what it was like to fight in World War I, no doubt taken from the story of the real Stubby himself.

Sadly, this also leads to a meandering story structure that most biopics suffer from. It may be historically accurate, but it tends to drag in the second act, as if the writer wanted to include all of the historical moments without tying them up into a tight story. If viewers can get past the uneven pacing and tone of the movie, these stories are fascinating and the characters pack a lot of heart and courage into these real-life accounts.

Courage is the real heart of SGT. STUBBY: AN AMERICAN HERO. Many times, the soldiers debate whether or not Stubby is actually courageous, or if he’s just a clever but lucky pup. Of course, during the movie it becomes clear that Stubby is exceptional. It’s great to see a family movie that places such a high emphasis on heroics and bravery, even if some of the dialogue is a bit on the nose at times.

Above these themes of courage and bravery, the movie has a very strong patriotic message. It’s wonderful to see the courage of World War I soldiers honored throughout the story. These moments remind all viewers of the sacrifice that the armed forces continue to make even today. Regrettably, some of these moments are also a bit “on-the-nose” as the movie tries to remind us of this fact time and time again with seemingly forced dialogue. Nothing in the movie is particularly nuanced, which may be expected for a family movie, but it would have been nice if SGT. STUBBY: AN AMERICAN HERO catered to older audiences a little bit more without, of course, inserting objectionable elements.