"It’s All About the Music" 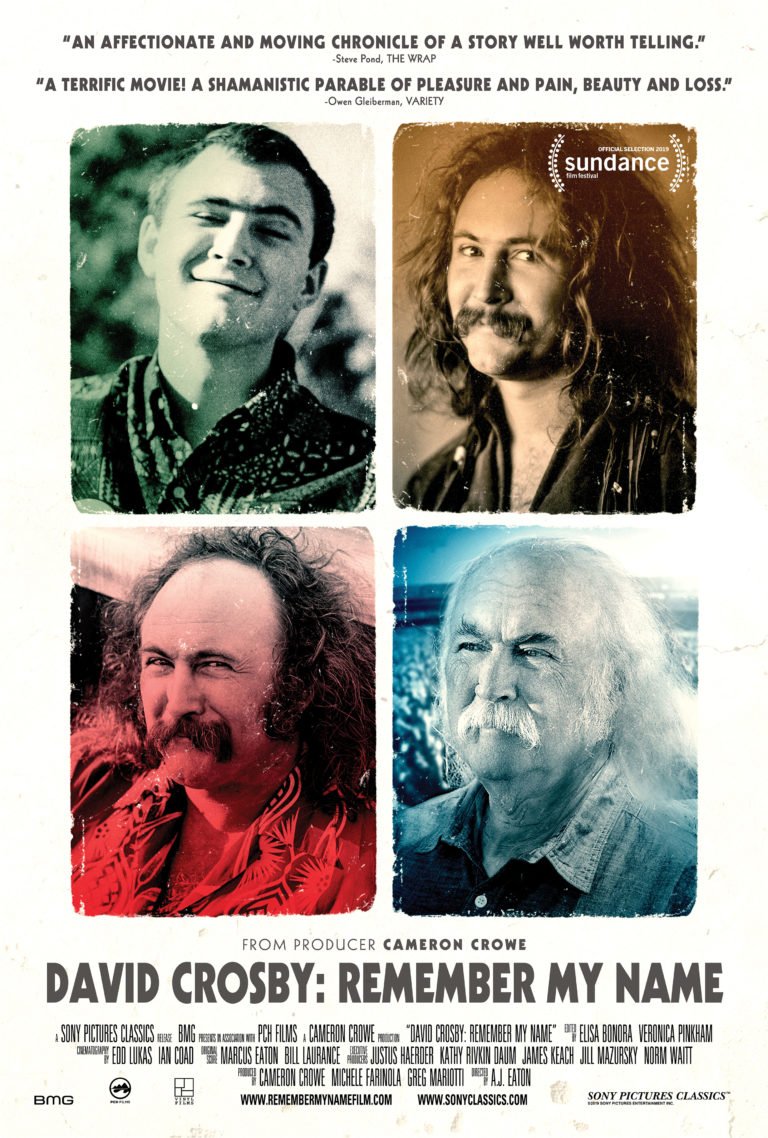 DAVID CROSBY: REMEMBER MY NAME is a documentary about the famous rock singer and composer behind the super-groups CROSBY, STILLS, NASH, & YOUNG and THE BYRDS. Interviews show Crosby recalling his life, the good and the bad. He says he regrets his bad treatment of other people and discusses his addiction to alcohol and drugs, which nearly killed him. Crosby says the most important thing to him now, besides being at home with his wife, Jan, is music. Music is his contribution to the world, he says.

DAVID CROSBY: REMEMBER MY NAME is a fascinating, engaging documentary. It’s surprisingly free of the leftwing politics known to animate David Crosby. Happily, he expresses regret concerning his past promiscuous treatment of women in the 1960s and 70s. The saddest moment comes when he mentions the tragic accidental death of his longtime girlfriend, Christine Hinton. Her death led him to become increasingly addicted to heroin and cocaine. REMEMBER MY NAME is an informative treatment of Crosby’s life, with some great music, but extreme caution is advised for strong foul language, brief nudity and frank conversations.

(Ro, B, C, LLL, V, S, NN, AA, DD, M):
Dominant Worldview and Other Worldview Content/Elements:
Light Romantic worldview with some moral, redemptive elements as rock, folk music star expresses regret for past behaviors and discusses how he turned himself into the FBI and eventually got sober through a stint in prison
Foul Language:
About 30 obscenities (18 “f” words) and two light profanities
Violence:
Newsreel footage of Vietnam War, antiwar protests and Kent State shootings (including footage showing a National Guardsman clearly discharging his rifle though the documentary says he denied he fired his weapon; MOVIEGUIDE® could not confirm the claim about the guardsman’s denial), plus music star discusses tragic accidental death of longtime girlfriend who died in a car wreck and he had to go identify her body
Sex:
References to promiscuous lifestyles in the 1960s and 70s
Nudity:
Brief upper female nudity in two scenes, rear female nudity in one image, rear male nudity in one image, and upper male nudity in two scenes
Alcohol Use:
References to alcohol use and abuse
Smoking and/or Drug Use and Abuse:
Brief tobacco smoking and marijuana use is promoted, but man’s past use of harder drugs is discussed but rebuked as destructive; and,
Miscellaneous Immorality:
News clip shows documentary subject claiming there were other shooters on the infamous grassy knoll when President Kennedy was shot on Nov. 22, 1963, subject says he first tried to hide from FBI when they put out a warrant for his arrest, but he soon turned himself into them and ended up in jail, brief discussion of two protest songs regarding the 1970 shootings at Kent State University in Ohio, and man says he regrets previous bad behavior.

DAVID CROSBY: REMEMBER MY NAME is a documentary where the famous rock singer and composer behind the influential super-groups CROSBY, STILLS, NASH, & YOUNG and THE BYRDS recalls his life, the good and the bad, and discusses what’s most important to him now that he’s facing death. DAVID CROSBY: REMEMBER MY NAME shows David regretting the substance abuse that nearly killed him and regretting his poor treatment of other people, while waxing eloquently about his love of music. The movie is an informative treatment of Crosby’s life, with some great music, but extreme caution is advised for strong foul language and frank discussion of past bad behaviors.

He discusses his time with THE BYRDS in the 1960s and the beginning and success of CROSBY, STILLS & NASH, the folk/rock supergroup he founded with Stephen Stills and Graham Nash. Crosby says the other members of THE BYRDS fired him because he became too political, and they wanted to sing more pop tunes. However, he said that he thinks the group’s electronic version of Bob Dylan’s “Tambourine Man” led to Dylan’s controversial decision to use electric guitars on his songs (many folk snobs rejected Dylan’s decision, but it actually made Dylan even more popular). Eventually, Crosby had a falling out with Graham Nash and Stephen Stills (a recent interview with Nash in the movie indicates that at one point Nash just became fed up with Crosby’s bad behavior, but Crosby doesn’t go into details about the final break up).

One of the most interesting sections of the documentary is Crosby recollections on what led him and many other popstars to settle in the Laurel Canyon area of Los Angeles. The Laurel Canyon area became a section that attracted many in the arts community, not just pop stars and rock stars. At the time, Crosby was having an affair with Joni Mitchell, who was perhaps of the most acclaimed female singers of her generation. Crosby admits he treated most of the women he dated very badly, Mitchell included. He recalls how Mitchell informed him she was breaking up with him by playing a song to him and their other friends about what a jerk he was. She was so angry that she played the song twice for them.

The saddest part of the documentary is Crosby’s recollections about his girlfriend, Christine Hinton, who suddenly died in a car accident in 1969. Crosby was clearly very close to her at the time and had to go identify her body. Her death marked the beginning of his longtime addiction to hard drugs, an addiction that eventually led to a prison sentence and a liver transplant but also led to a changed life.

The movie briefly mentions the leftist politics that led to Crosby being kicked out of THE BYRDS. It also has a brief section dealing with the deaths of four students at Kent State University May 4, 1970 during protests over President Nixon’s decision to bomb Cambodia during the Vietnam War. At the time, Crosby, Stills, Nash, & Young released two popular protest songs about the tragedy, “Ohio” and “Find the Cost of Freedom.” Other than that, however, the documentary doesn’t discuss Crosby’s past or current political activism, which apparently includes some public criticism of President Donald Trump as well as Crosby’s support for Democrat presidential candidates Bernie Sanders and Elizabeth Warren.

Instead, Crosby says that the most important thing to him right now, besides being with his wife, Jan, is music. His music is the thing he’d people to remember, he says, the only thing he really has to contribute to the world.

DAVID CROSBY: REMEMBER MY NAME is a fascinating, engaging documentary with some positive elements. However, it has some strong foul language, brief nudity, discussion of past affairs, and some promotion of marijuana use despite its message against drug abuse. Extreme caution is advised.