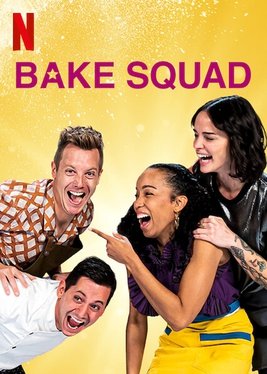 BAKE SQUAD is a cooking reality show on Netflix. It takes viewers on a sweet dessert experience with Chef Christina Tosi. Her four hand-selected dessert geniuses create culinary masterpieces for a client’s special event. In the first episode, the client is a mother of six boys who wants to make the birthday of two of her boys special. The clock ticks, and the contest between the four chefs begins.

Based on this first episode, BAKE SQUAD is a wholesome, family-friendly cooking show with no really objectionable content. The mouthwatering desserts look like sweet dreams come true. The first episode, titled “Brother Birthday Bash,” has a strong moral worldview about helping people make their special events even more special. It encourages celebrating life and has some pro-family messages. For example, the client talks about her six boys, and the cake chef mentions how the event resonates with her as a fellow mom. The only downside are some light profanities about how delicious the desserts are. BAKE SQUAD is a fun little reality cooking show. It can be enjoyed by families with minimal worry.

(BB, L, M):
Dominant Worldview and Other Worldview Content/Elements:
Strong moral worldview about helping people make delicious desserts that can be compared to helping and loving thy neighbor, plus there are some pro-family and pro-life messages such as a client talks about her six boys and the cake chef talks about how this resonates with her as a fellow mom
Foul Language:
No obscenities and seven light OMG profanities, which come from the client who expresses her shock and enjoyment of the delectable treats
Violence:
No violence
Sex:
No sexual content or immorality
Nudity:
No nudity
Alcohol Use:
No alcohol use
Smoking and/or Drug Use and Abuse:
No smoking or drugs;
Miscellaneous Immorality:
There is a gluttonous number of sweets and size and one female chef mentions that this contest is personal because she knows what it’s like being a single mother, which isn’t an ideal family situation.

Every person who watches BAKE SQUAD’s first episode is in for a real treat of a cooking show. The program’s formula follows world class pastry chef Christina Tosi as she collects four dessert art geniuses. The four geniuses are “pastry illusionist” Christophe, Maya-Camille “the flavor fanatic,” Gonzo the “Chocolate Champion,” and Ashley, “the queen of cakes.” Together with Christina, they become the “Bake Squad,” and aim to bring the dessert dreams of their customers to life.

The program’s formula is simple. In each episode, Christina Tosi brings in a client who has some party or event that needs a little extra dessert flair. The customer pitches what the event is and who it’s for. Then, each member of the Bake Squad has seven hours to create a dessert art masterpiece themed toward whatever the event is. After the end of the seven hours, Christina and the customer come down, sample each dessert, and then the customer decides which masterpiece to have at their special event.

In the first episode, titled “Birthday Brother Bash,” Christina introduces the Bake Squad to their client, Cynthia, who wants the bake squad to make a special cake/dessert for two of her sons’ birthday party. Cynthia talks about how she’s the mother of six boys, and she wants to specifically make this birthday special for two of her boys. The Bake Squad asks for information to fuel their creativity. Cynthia informs them 6-year-old Solomeo is a fitness buff, and her 12-year-old, Sharif, loves to build things. Both boys were also fans of superheroes, dragons, dinosaurs, and really love comfort food. Each of the Bake Squad members take this information and goes out of their way to make insane, ingenious dessert wonders.

Maya-Camille makes a sheet cake, that on top has a two-story food house with food fitness interests inside, which also includes a food basketball court, pond and racetrack, that she dubbed the “Foodscape.” Christophe decides to make a superhero themed cake that shaped like a giant ice cream cone made with a mixture of chocolate cake and red velvet cake waffle cones. Ashley made a three-tier cake where each tier was not only a different flavor cake but each tier both inside and out looked like the favorite foods of the two boys, spaghetti and meatballs, Mac and Cheese, and Pizza. Finally, Gonzo decides to make a 100 pound chocolate egg that has parts of a chocolate dragon coming out surrounded by chocolate rocks, and the dragon parts looked realistic. After trying each of them, Cynthia decides on Gonzo’s dessert, which gets a lot of approval from the birthday boys.

From a production standpoint, this is a very well done, highly organized cooking competition show. The squad has a healthy competitive nature about it, where they were all competing to be the best. If one of the squad members needed assistance, they all would help out, like lifting a 100 pound chocolate egg out of a mold. For the most part, the show is very family-friendly and wholesome. The only real concern of the first episode is the taking of the Lord’s name vain by Cynthia and Christina when they find out how delicious each of the individual desserts was. Based on how they looked, they must have tasted amazing! In short, BAKE SQUAD a very wholesome, enjoyable cooking program that can be enjoyed by families with minimal worry, and MOVIEGUIDE® is looking forward to seeing how the rest of the episodes pan out.