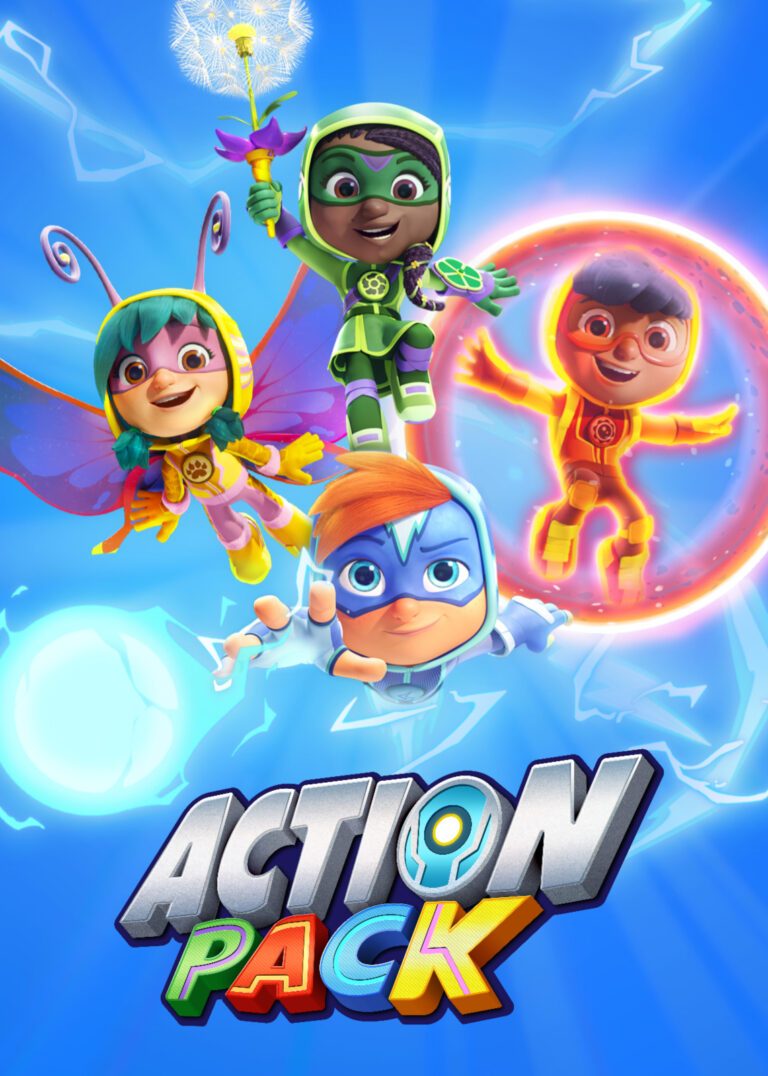 ACTION PACK is an animated science fiction series on Netflix. The program features the adventures of four children who attend a superhero school, which is more of a well-funded homeschool co-op, and use their superpowers to help their community. Each episode of season one involves two 12-minute mini-episodes with a “fun fact” in between that usually revolves around explaining one of the main characters’ powers. Each mini-episode has some sort of dilemma that the four children, Treena, Clay, Watts, and Wren, must use teamwork and friendship to overcome. Most episodes wrap up in a tight bow by the end, though some will tease a larger narrative.

ACTION PACK is a fun, colorful, visually appealing program. The program is very episodic with little to no character development, however. Though it has no Christian references, ACTION PACK has a strong moral worldview. The children learn lessons about friendship, teamwork, helping others, selfishness, not bottling emotions, and waiting on your friends. There are some occasional issues, such as using deception to solve problems, some political correctness regarding a white male character and light references to evolution.

(BBB, PC, Ev, Ho, V, M):
Dominant Worldview and Other Worldview Content/Elements:
Very strong moral elements with one or more lessons learned each mini-episode, plus light political correctness as the only pack member who has character flaws is the white male and lessons are almost always taught by children to other children and never by adults or authority figures, with some light evolution references as dinosaurs are pointed out to be similar to chickens and some light LGBT innuendo when a dinosaur who looks like a human girl but is a dinosaur is told she doesn’t have to hide who she really is
Foul Language:
No foul language (children say things like “Oh, my popsicles,” rocks, rats and popsicle sticks)
Violence:
Light cartoon violence such as children jump up to catch robots, and a statue of sticks comes tumbling down
Sex:
No sex
Nudity:
No nudity
Alcohol Use:
No alcohol use
Smoking and/or Drug Use and Abuse:
No smoking or drugs; and,
Miscellaneous Immorality:
Light miscellaneous immorality as children use deception a few times to accomplish their goals and are never directly corrected for doing so, and their deception even works perfectly to solve their problem in one instance.

ACTION PACK is the name of an animated children’s show on Netflix written by Shea Fontana and starring Giancarlo Sabogal, Sydney Thomas, Nevin Kar, Oscar Daniel Reyez, Julieta Cortes, and Hartley Wexler. Produced by Carson Loveday and Shea Wageman, ACTION PACK centers on the adventures of a group of four children who go to a superhero school, which is more of a well-funded homeschool co-op, and use their superpowers to help their local community.

Each episode of Season One involves two 12-minute mini-episodes with a “fun fact” in between that usually revolves around explaining one of the main characters’ powers. Each mini-episode has some sort of dilemma that the main characters, Treena, Clay, Watts, and Wren, must use teamwork and the power of friendship to overcome. Every episode wraps up in a tight bow by the end, though some of them will tease a larger narrative. Aside from the occasional tease, which culminates in a not-so-secret villainess near the end of the season, the show is very episodic with little to no character development continuing from one episode to the next.

Most of the conflict comes from silly, low-stakes occurrences that take place around their city. For example, in one episode, Clay’s younger sister is a toddler and isn’t able to play with the 7-year-old “big kids” because she’s too little. When her superpower manifests and allows her to turn into a giant, the “Action Pack” must unite to get the little sister to see the bright side of being little so that she will acquiesce to their requests and turn back to her normal smaller size. Sometimes, the pack must confront other superpowered kids, who always turn out to be good, learn some lighthearted life lesson and become friends with the pack.

Though it has no Christian references, ACTION PACK has a very strong moral worldview with the children learning lessons about friendship, teamwork, selfishness, not bottling emotions, and waiting on your friends. There are some light evolution references, however, a few voices on minor background characters that adults would recognize as sounding homosexual, and one instance that could be seen as planting the seeds of LGBTQ acceptance. In that instance, the pack comes to accept a girl who looks like a girl, dresses like a girl, and talks like a girl even though, they find out during the episode, she isn’t really a girl. Her name is Dinah Rex, and the children come to learn she’s really a dinosaur with a long tail and horns, who looks like a normal girl. The 7-year-old children all affirm her for who she is, accept her differences and tell her she doesn’t need to hide who she really is. It’s also in this episode that one of the boys learns that he should talk about his feelings and be open with his emotions and how he feels in order to be strong. There’s also a light politically correct element as the only child hero who’s shown to have an inner moral defect is the white male. While some of them occasionally make mistakes, neither the girls nor the ethnic boy ever have any character flaws. The only other children who have any character flaws are boys with no skin color. These are characters such as Mason, who’s made of rock, and Cold Snap, who’s made of snow and ice.

ACTION PACK has no obscenities, though the characters use a plethora of substitutes including plants, tootin’, rocks, rats, popsicle sticks, and many more, as playful substitutes for what would otherwise be expletives. There are no profanities, though the character Cold Snap does say “Oh my popsicles” and a few characters say “oh my” followed by a similarly random, lighthearted item throughout the season. ACTION PACK has some light cartoon violence including when children jump to catch robots and miss them, children get dizzy on the merry-go-round and through other means, and a statute of sticks comes tumbling down. Finally, the episodes sometimes can contain miscellaneous immorality, such as when the pack uses deception to solve their problems, which happens twice in the first season. The first time, it successfully solves their problem, and the second time it doesn’t go well, but the problem is resolved without directly handling the fact that the pack used deception.

The camera work is decent, and the animation is well done. The character movements are fluid, the special effects are well-done, and the character faces are expressive and clearly convey the emotions the characters are feeling. The show is visually appealing overall and has plenty of bright colors to attract and keep the attention of young children. While the characters do a lot of talking, there is never more than 10 to 15 seconds without something whooshing or zipping across the screen to re-engage young viewers.