5 Disappointing Messages in BEAUTY AND THE BEAST 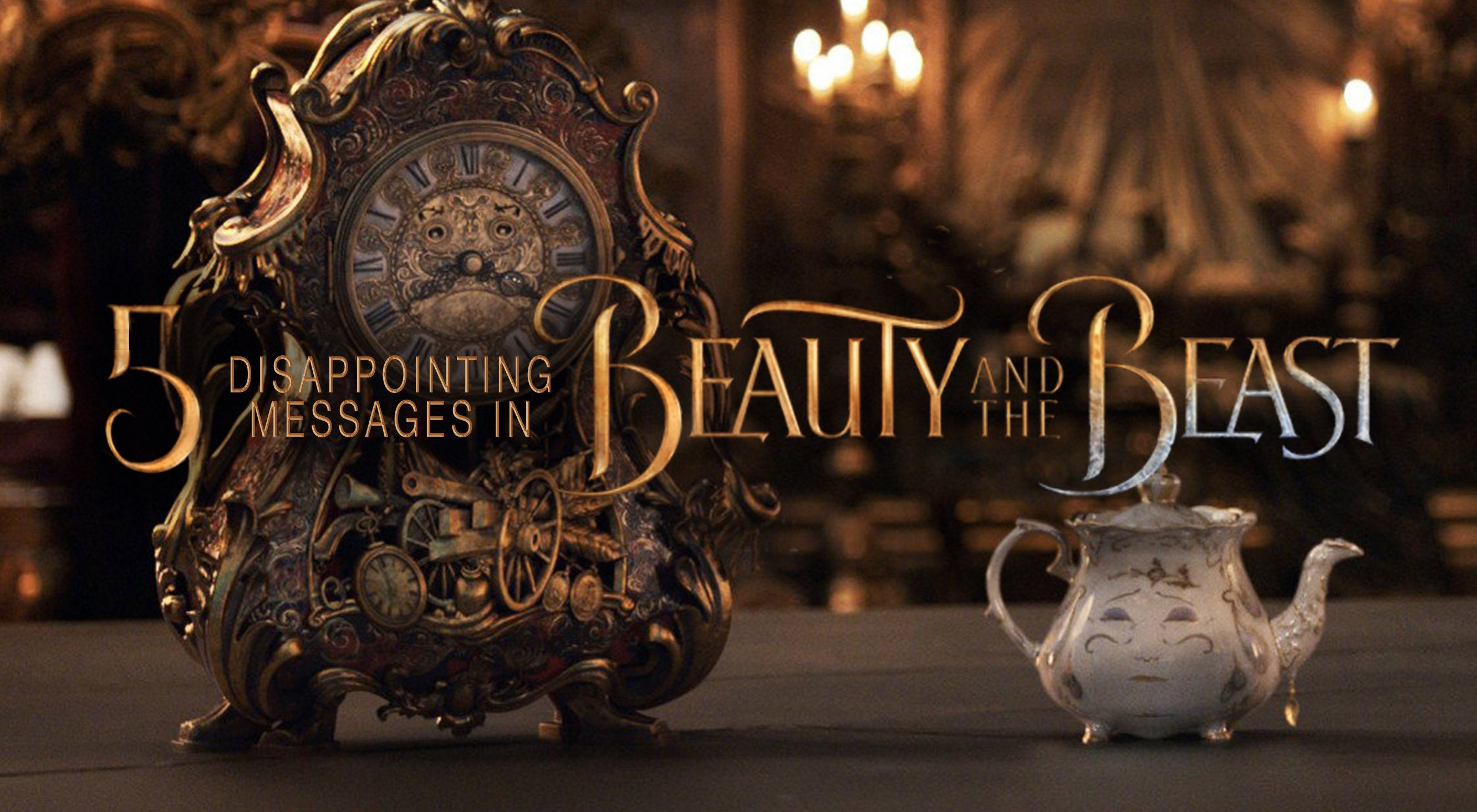 5 Disappointing Messages in BEAUTY AND THE BEAST

I am disappointed. I was a 90’s child in a big frilly dress glued to the Disney Channel. Disney stories taught me that truth, loyalty, and compassion were more valuable than outward appearance.

In eager anticipation for the remake of BEAUTY AND THE BEAST, I re-watched the 1991 animated film, the 1946 French version and the 2014 French remake. Admittedly, my French was never very good, but the point is BEAUTY AND THE BEAST was my favorite fairytale in any language.

I’m not alone. Box office reports from this past weekend for the latest BEAUTY AND THE BEAST show a record setting $170 million opening. I can’t go anywhere online without seeing advertisements for BEAUTY AND THE BEAST merchandise, including items like “Her Beast” and “His Beauty” t-shirts. We clearly value the endearing story of beauty being found in a person’s character. So why then am I disappointed by the new film?

This is what I just learned from my favorite Disney story:

Belle, our hero, blatantly lies. Her most selfless moment of taking her father’s place is marred by deceiving her father and the Beast. Making matters worse Mrs. Potts doesn’t bat an eye at her effort to escape.

Gaston assumes that he and Belle are going to have children, and Belle says that she is not ready for children. I get it, Gaston is a terrible future, but it has nothing to do with not wanting a family. The focus should have been on Gaston being an egotist, not rejecting motherhood altogether.

3. Authority can be dismissed.

The servants don’t take the Beast seriously; they deliberately undermine his authority by dismissing his commands as angry rants. Instead of Beast having a moment of compassion and giving Belle a room (as in the animated version); his servants take the initiative, and he is left out of the decision completely. Even Belle defiantly storms into the forbidden West Wing. (In the animated version, she was drawn there by innocent curiosity.)

According to Mrs. Potts, the Beast was just an innocent boy corrupted by his father; therefore, his behavior is something excusable and something to be pitied. He’s an adult; he needs to take responsibility for his actions. Maurice also apologizes to Belle for being a protective parent. He obeyed his wife’s dying wishes and saved Belle’s life. How is that something to apologize for? Yes, they never went back to Paris, but he didn’t do this to be controlling. In fact, he encouraged Belle to be educated, independent and brave.

5. Actions are excusable as long as you are popular.

Gaston is a conceited cheat, nothing new there, but surprisingly he is also cruel. He left Belle’s father to die in freezing temperatures tied up in wolf-infested woods. I was so distracted by the gravity of what Gaston had just done I couldn’t enjoy the scenes immediately afterwards with Belle. He also sends Belle to the insane asylum as well. Wait, what?! I know she is riding into town in a bright yellow ball gown in the dead of winter, but fashion decisions are not an indication of insanity.

LeFou allowed Gaston to abandon Maurice and lied to protect him. Despite his opposition to abandoning Maurice; he still helped Gaston get away with it.  Worse still, the townspeople don’t hesitate to send Belle and her father away since they very clearly don’t belong in the community.

For the record, there were some brilliant tributes to the original French narrative and borrowing from the French films that I thought brought a lot to the story. Most importantly gift of the rose, the ornate grandeur of Beast’s court, the magic book that will take you anywhere (in the black and white French version it was a magic glove), and the torches held by human hands. (If you have not seen the footage of Belle entering the castle in the 1946 version you have missed true movie magic.) The library twist was also very entertaining. Belle’s reaction to all the books was priceless. There is no question that the film had some amazing special effects and story details in true Disney fashion.

But even so, I left the theater troubled. I saw the next generation of girls in frilly dresses being taught that this kind of behavior is to be admired and emulated. We have seen in various forms a serious decline in our values, particularly in popular culture. This is just another step.