5 Things You Need to Know About the Movie CAPTIVE 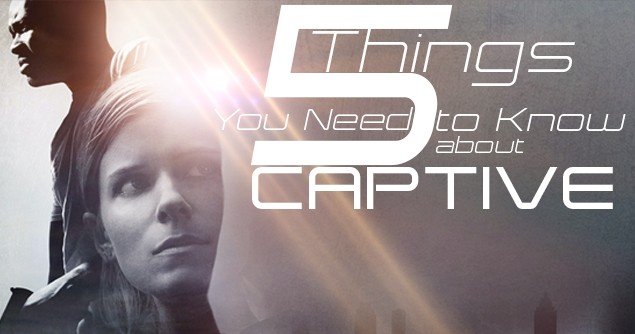 5 Things You Need to Know About the Movie CAPTIVE

This fall, a movie is coming to the theaters that so blatantly proclaims the Gospel that its tagline is, “Faith. Redemption. Survival.” The movie is called CAPTIVE, and it stars David Oyelowo (SELMA) and Kate Mara (FANTASTIC FOUR). The movie is a true story about Brian Nichols, an escaped convict who goes on a shooting rampage during a court case and kidnaps and holds a young woman, Ashley Smith, as a hostage. He detains her for seven hours and during that time, she convinces him to let her live by reading Nichols portions of The Purpose Driven Life, inspiring him to search for redemption. CAPTIVE hits theaters worldwide on September 18, 2015. Here are five interesting things about the movie, CAPTIVE:

Listen to the Official Movieguide® Podcast where we interview Brian Bird, the Screenwriter of Captive

1. CAPTIVE is based on the book, An Unlikely Angel, by Ashley Smith. After making headlines in April 2005, Ashley Smith decided to write a book about the miracle she experienced when she found a way to be set free from killer, Brian Nichols, who held her hostage for seven hours in her Atlanta apartment. She shares her traumatic experience for the first time and touches on many subjects including redemption, addiction, violence, death, loss, faith, and love. The book will leave no reader untouched. 2. Ashley Smith recovered from her drug addiction because of the ordeal she went through. During their seven hours together, Ashley Smith opened up to Nichols about her past, and the drug addiction she was currently facing. He asked her if she had any marijuana, and she told him she didn’t, but she did have crystal methamphetamine that she offered to him. When asked later in an interview if she took any of it with him, Smith replied, “No way. That was my last chance. I had been more of a prisoner to that type of drug for the past few years than I was to Brian Nichols in that apartment. It took control of my life. It took control of everything that I have. It even made me give custody away of my daughter, the person that I love the most in the world. […] I’ve learned from a lot of the mistakes that I’ve made before, and I won’t make the same ones,” she goes on. “And I’ll be the best example that I can for [my daughter], as a godly mom, friend, daughter… I have another chance to prove to my daughter that I do love her by my actions. And, I do that every day. 3. Why was David Oyelowo drawn to the film? One of the stars of the film, David Oyelowo, who plays Brian Nichols, went on record, saying, “I was drawn to this story because it beautifully illustrates how a broken spirit can be healed by an unexpected source of hope. I feel blessed to be continuing my very fruitful relationship with Paramount.” Oyelowo has also been outspoken about his faith and his awareness of the media’s effect on culture and society. He has talked about praying about what roles to take and God’s guidance in choosing those roles. He says, “I want to put in the world things I can defend to my children. I’m not a subscriber to the idea that what we make doesn’t affect culture. What we do is so powerful. It does shape culture and people’s worldview.” 4. The movie is God-centered. One of the producers of the movie, Terry Botwick, offered this statement, “In March of 2005 Ashley’s story captivated the nation on news outlets everywhere. Her story is thrilling and redemptive as God intersected the lives of two very broken people in the most dramatic way. It has been amazing getting to know Ashley and to be working with such fine actors. I’m so pleased to also be partnering with Paramount to bring this authentic encounter to a worldwide audience.” 5. The Purpose Driven Life The Purpose Driven Life is a devotional book written by Rick Warren, a Christian author. In total, it has sold over 30 million copies worldwide and is the second most translated book, after the Bible. According to news outlets, Smith read chapter 32 of the book to Nichols, which influenced his decision to release her. After the story of what Smith went through, sales of The Purpose Driven Life went up greatly, becoming Amazon’s second best-selling book.