Behind the Scenes of FINDING DORY 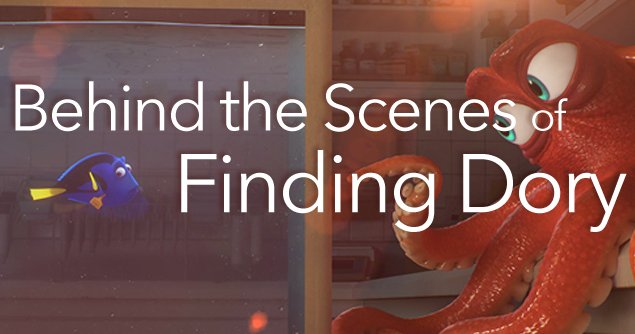 An Aquatic Fairy Tale About Family:

Behind the Scenes of FINDING DORY

Writer/Director Andrew Stanton, who also did the first movie, said he thinks of the new movie as a fairy tale.

FINDING DORY is also about family, specifically Marlin and Nemo’s friend, Dory, a blue tang fish who suffers from short-term memory loss and has lost her parents. In the movie, set a year after the events in FINDING NEMO, Dory suddenly remembers she has a mommy and a daddy. A clue from her jumbled memory leads Dory, Marlin and Nemo across the ocean to find Dory’s lost parents. The journey takes them to the Northern California coastline, then to the nearby aquarium park and aquatic rescue center in Monterey, Calif.

Part of Dory’s search for her lost parents takes her to a giant, mysterious underwater kelp forest, as opposed to the open ocean in FINDING NEMO

“FINDING NEMO was like traveling in a desert,” Stanton said. “This one, it’s like a forest, it’s like a fairy tale. In a fairy tale, things are hidden, secrets are hidden in the forest, and things are discovered in the forest. And, I realized it just kept working. And, it put us near the coastline. Then, once we looked at the breadcrumb trail that is Dory. . . she’s got this odd, eclectic knowledge of stuff. I said, ‘I think she needs to be around humanity. I think she’s had to have seen some of the most bizarre stuff.’

“We knew about the Monterey aquarium. We know about the California coast. It all just started to work. It brought in all these new species. We could be at the ocean but right inland with people. It just started really to work. And, once it found the theme of ‘Rescue, Rehabilitation and Release,’ which really was the subtle arc of her character, it just all fit like a glove.”

Stanton told reporters he originally had left FINDING NEMO behind him. Then, in 2011, he was watching the movie’s 3-D release after a long absence and grew to become worried about Dory.

“I walked out very worried about Dory. I couldn’t stop thinking about how she needed closure.

“I always knew the film was going to be about her accepting herself. It took a long time to nail down what exactly are we saying about that. The premise I ultimately came out with was that you’re not at peace unless you can truly accept who you are. I think she was always going to be unsettled until she experienced what it was like to succeed on her own completely. She had learned how to survive in the wild by being the best co-pilot ever. So, that meant she always depended on somebody else to be successful. The only way she was going feel completely fulfilled was if, like a little kid, ‘I did it all by myself.’ That was really a grand design to do that simple thing for her.”

“We also felt she needed to grant herself the same grace that we felt she grants everybody else,” Producer Lindsey Collins added. “She always apologizes for herself and never expects anybody to apologize for themselves. She’s more open than everybody. It’s why people really love Dory.”

“Just keep swimming was a mantra that was taught to us in the first movie,” Stanton said. “And, I think what I needed to do was make that personal for her. She didn’t realize that it was actually something taught to her by her parents. And, you have to combine it with, ‘What would Dory do?’ When the two come together, [there’s a] power that happens.

“I was trying to be universal with her unique specificity, in a really weird way,” he added. “Nobody wants to watch a character be a generalization of something, so you go very specific, but you’re hopefully saying something universal with it. I was not just trying to talk about anybody with a disability, but I was using her disability to represent everybody. And, I think the obvious category that comes first is people with an obvious handicap, but I also think it works for anybody. Because, maybe there are people who think they’re perfect, but nobody is, and everybody has a flaw that may be mislabeled as such.

“I’ve hit middle age, and I’ve realized that I’m not really going to change. I am who I am, and I’ve got to learn to start enjoying that fact, the good and the bad.”

When asked what they gained by waiting so long top make the sequel, Stanton replied, “I was certainly a better writer, a better filmmaker by that time. Knowing what we had to tackle and solve, I don’t think I could have solved it earlier. I think I would have failed. . . . It was a very recalcitrant story.”

“I think the greatest storylines, as evident in this movie, have to do with family, because that’s the one thing that’s most important in all our lives. Any time you’re in a familiar situation, a dad and a child, those are the stories that resonate with me because they’re about something tangible and real.”

Below are some of the other questions and answers at the FINDING DORY press conference in Beverly Hills, Calif.

Q:  Dory’s very much about going with the flow and just keep swimming. I’m wondering for each of you, are you more of a go with the flow type person or a planner?

Actor Hayden Rolence (Nemo):  I guess I’m a planner too.

Actor Eugene Levy (Dory’s Father Charlie):  I like to think of myself as a go with the flow person, but I’m not. I think I would put myself in the planner category.

Actress Kaitlin Olsen (Destiny the Whale Shark):  I’m definitely a planner, and since I had kids, I’ve turned into an anxiety ridden control freak planner. So the past two years of my life have been me consciously trying to go with the flow and let it happen. I’m trying very hard to be a more go with the flow person.

Actor Ty Burrell (Bailey the Beluga Whale):  I don’t think I’m a planner or a go with the flow person, which makes me a worried person without a plan.

Actor Ed O’Neill (Hank the Octopus):  I don’t plan. I don’t really go with the flow either. I’m mostly confused. I just put one foot in front of the other. Just keep swimming. I’m up in the morning. I move around. And, here I am.

Q:  Hayden, you’re taking over Nemo, a classic character. Were you a FINDING NEMO fan? Did you watch FINDING NEMO, then audition for this?

Hayden Rolence:  I was a big FINDING NEMO fan even before FINDING DORY came out. Even before I knew I was going to be in FINDING DORY. I really loved the world of Nemo, and I never thought I’d be able to play him.

I was a little bit nervous at first, because he’s a big character and someone everybody loves, and I wanted to do Nemo justice.

Q:  Ellen, either by your nature or passage of time, have you battled forgetfulness in any form? If so, how have you tried to solve that in the clever ways Dory does?

Ellen DeGeneres:  Well, I take ginkgo biloba, whenever I remember. I don’t understand why they tell you to take medicine to remember things because you wouldn’t remember to take the medicine.

I do have that problem with memory, not as bad as she does, but I don’t try to do anything about it, because it’s just who I am. I just try to live in the moment and hold on to these few moments that I have.

Q:  Which qualities did you give to Dory and which ones would you like to have from her?

Ellen DeGeneres:  I would love to have every trait of Dory’s. I try to have as many traits as she has as far as optimism, perseverance, non-judgment, and not having any resentment. She doesn’t hold onto anger and doesn’t feel like a victim, and I think that’s why she’s such a lovable character that Andrew created. She really just thinks everything is possible and never for a second thinks that anything is wrong with herself or anyone else. She just keeps swimming.

Q:  Marlin and Dory have two very different approaches to problem solving. One is very analytical, one is taking what you got and going with it. How do you deal with problems yourself?

Ellen DeGerenes:  I do both. It just depends on the situation. Being a comedian, I think I look around and analyze all kinds of things. I try to not do anything irresponsible, but I do also like to be spontaneous and take chances.

Q:  Did you guys record the scene together when you finally met your parents? That was such an emotional, authentic moment. I would think that would be hard to record separately and get that emotion across.

Ellen DeGeneres:  I was alone for that reunion. It was a beautiful thing to read. It was sad. It touched me. It was very emotionally for me to record that day.

Albert Brooks:  The first time I read the script, I welled up. I welled up a couple of times reading the script. It was beautifully written. It’s not the easiest thing to do when you’re not working with the other people, so you are relying on the director to make sure you’re giving him what he wants.