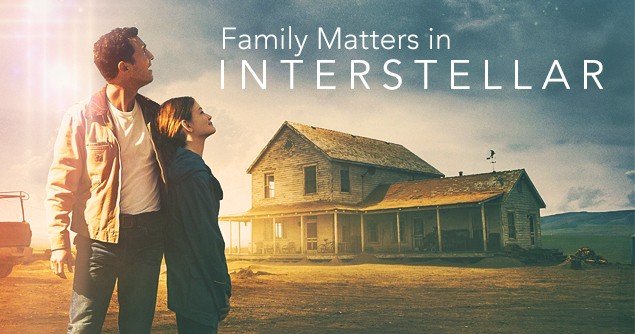 Movieguide® recently had the chance to participate in a press conference for INTERSTELLAR, a new science fiction adventure that deals with many issues.

INTERSTELLAR is a science fiction adventure set on a devastated earth in agricultural ruin. Cooper, a widower with two children he desperately loves, is asked to pilot a spaceship that will travel through a wormhole into another galaxy that may have a new habitable planet for the human species. The only problem is, he can’t guarantee his children when or even if he will return. As he sets out on his epic journey, Cooper faces impossible odds in unimaginable circumstances.

In the press conference, Director and Co-Writer Christopher Nolan (the DARK KNIGHT Trilogy and INCEPTION), his brother and co-writer Jonathan “Jonah” Nolan and actor Matthew McConaughey (who plays Cooper) discussed where the story came from, why they’re hopeful for mankind and if they think space travel is worth pursuing.

Question:  It’s fascinating to see a science fiction movie with so much hope. Christopher, when you were writing INTERSTELLAR, where did you find that hope?

Christopher Nolan:  Space exploration to me has always represented the most hopeful and optimistic endeavor that mankind has ever really done. I was certainly struck when they flew the space shuttle in on the 747, when it came to the science center here in L.A. Emma [his wife] and I were up at Griffith Park with hundreds of people waving flags and watching this thing fly down. It was a very moving moment. A little melancholy at the same time, because what you felt was that sense of that great collective endeavor. The hope, the optimism of that, is something it feels like we’re in need of again. I feel very strongly that we’re at a point now where we need to start looking out again, and exploring our place in the universe more.

Question:  For both Nolans, the actors and actresses gave a hint that this movie might still be a film if there wasn’t even a space exploration. In other words, there’s a substantive portion of this film that’s a very intimate family drama, and I’m curious if you see marrying two separate ideas and blending them into a space odyssey that has this rooted feeling in the dirt – literally in the dirt of Earth.

Christopher:  I don’t think of it so much as two separate things as just a realization. When I first looked at Jonah’s draft on INTERSTELLAR, it was very clear at the heart of the story there was this great set of characters, this great family relationship. We found that the more you explored the cosmic scale of things, the further out into the universe you went, the more the focus came down to who we are as people and what are the connections between us.

Just to speak to the creative approach we’re taking, when it came to Hans Zimmer’s involvement in the music, one of the things I did with Hans is I didn’t want him to know what the genre was when he started working. So before I actually started working on the script, I wrote out a page of what I considered to be the sort of heart of the story – the relationships, the idea of a father having to leave his child, his children. I gave it to Hans and said, “Work on that for a day, and give me what you’ve got at the end of the day, and that’ll be the seed that we’ll grow the score from.” Indeed, the finished score came from that particular creative act.

That is just an illustration of the approach we all tried to take in keeping this about the humanity and using the exploration of the universe as a lens through which to view ourselves as human beings.

Jonah Nolan:  Just building on that, we are only [an] instrument for understanding the universe. You have to ground it in human beings. I was struck – the first step on writing this film was trying to understand some of the science behind it, that’s where we started – and I was struck trying to understand relativity, because I felt like it would be an important and interesting story element. You read Einstein, and he was a fascinating figure, who didn’t have any instruments. He didn’t use telescopes; he used his mind to try to understand the universe. You’d read these thought experiments that he’d create. It was always two people on a train or twin brothers going in a spaceship – you read enough of these, and you begin to realize the common element for all these thought experiments that Einstein did to try and understand the nature of the massive scale of the universe around us [was] there were always people at the heart of all of them. There were always relationships and a sense of melancholy or longing or sorrow: one person in a train at the speed of light. I thought that was, as Chris suggested, the idea that, if you want to explore these bigger questions, you have to start, you have to move proportionally in the opposite direction, making sure it’s grounded in the human experience.

Question:  [To Matthew McConaughey] As the father of a daughter, and as someone who has to go off and film movies, how did that affect you approach for you character?

McConaughey: I’m in a fortunate position because my family gets to come with me when I head off. If you take a quick snapshot of this panel, we’ve got some Nolan lineage here, and they all are experts in their own part of what they did on the film as writers and producers. Chris has a daughter, so it was apparent to me early on that this was about family, that this was about parents and children. I think that’s obviously where the aorta of the film, emotionally, sits. Even if you’re not parents, you have parents, and you’ve been in that situation where there’s a certain kind of goodbye. Nothing, hopefully, as extreme as this movie, but that’s where everyone leeches into the common denominator that runs through this, that everyone can understand.

Question:  What was the initial idea that brought what we now see on the screen?

Jonah:  The inception of the project first began for me in 2006, 2007, when I first started thinking about it. Growing up in this age, lucky enough to grow up in this country and this time, it feels like every day is Christmas. Every day there’s some remarkable technology, there’s some remarkable thing. Then, you get to a certain moment where I realize that all those Americans who landed one the moon, all those human beings who landed on the moon, did so in between Chris being born and me being born, and no one had gone back since. All these Super 8 films of rocket launches that we grew up watching. You get to a certain age and you realize that all the speeches about going back, they’re [just] speeches. There’s no money there. We’re not going back. That moment, it felt like the melancholy, or the sadness of that, was to imagine as a species that we might have peaked. That was a sad realization. Growing up, you’re promised jetpacks, and we get Instagram. Kind of a bum deal, I think. So I was rooted in this optimism of “What’s the next moment in which we start to journey once again?”

Christopher Nolan:  I was born in 1970, actually, Jonah, for the record. [laughter] For me, the inception of it was talking to Jonah about the script he was writing. He was writing it for Steven Spielberg at the time, but we always bounce ideas off each other, and it just sounded incredibly exciting. It’s really about an inevitability. We’re going to leave this planet at some point further than we have, we’re going to go beyond the moon, we’re going to go to Mars. We all kind of know that on some level.

Be sure to read our full review of INTERSTELLAR here.