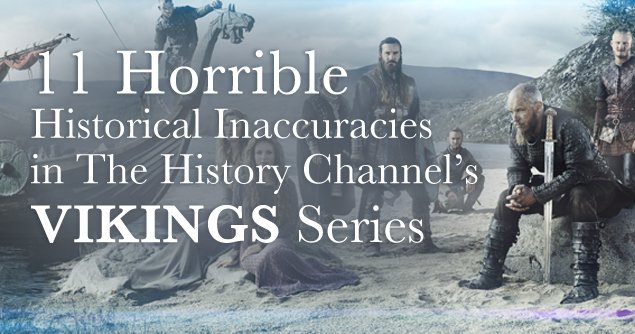 VIKINGS, an Irish-Canadian television series written and created by Michael Hirst, for the History Channel, and filmed in Ireland, has been tremendously successful. The life and times of Viking Ragnar Lodbrok, “a farmer who rose to fame by successful raids into England and eventually became king of Denmark,” has gripped popular imagination and renewed interest in the Vikings. Indeed, most of the enthusiastic fans of the VIKINGS series were probably not even aware of much of the history of the Vikings before this series were launched March 2013. VIKINGS is now in a fourth season, and they are already working on their fifth season. One understands that some artistic licence needs to be made for films, but the Michael Hirst TV series for the History Channel is awash in serious inaccuracies.

1. Where are their helmets? Inexplicably, none of the Vikings seem to wear any helmets in combat. Considering that most combat fatalities come from head wounds, the helmet was the single most important piece of armour for any veteran warrior. Viking helmets were advanced and effective, presenting a terrifying visage to their enemies. Viking helmets were effective at intimidating their enemies. Most, when faced with these Viking warriors emerging from the sea, with helmet, shield, chain-mail armour and sword, or axe, and spear, fled without even attempting to oppose them. Presumably, the filmmakers wanted their stars to be easily identified and so have dispensed with helmets entirely. Many of their key actors, such as Rollo, survives despite wearing no armour at all and are presented as fighting wearing only trousers!

2. Anachronisms abound. Many of the Vikings are depicted as shaving their heads, including Ragnar, who apparently has his head covered in tattoos. There is no historic evidence that Vikings did that. Anyone who has lived in Scandinavia would be aware of the incredibly biting cold. To deliberately remove the hair from ones’ head when living in often icy conditions and sailing the open seas, would be insane.

3. Absence of security for settlements. There are some gut-wrenching scenes of massacres of civilians, women and children, depicted in VIKINGS. However, these are not of Saxon civilians killed by Viking invaders, but Viking settlers killed by brutal and treacherous Saxons! In a bizarre twist, the History Channel portrays the Vikings as settling without any semblance of security, with indefensible villages spread out in the open, without any form of stockade, fortification or protective measures. Not even towers are erected. That just never happened. Considering that the Vikings were invaders, they took extraordinary measures to erect comprehensive fortification structures, normally in circles, surrounded by a moat and sharpened stakes, with all their habitations neatly organised within this fortification. Archaeologists are still digging up these Viking settlements within the British Isles. Yet, the History Channel would have us believe that these ultimate warriors would recklessly spread their wives and children out on indefensible landscapes in foreign lands, without any provision made to protect them from slaughter!

4. Inexplicably, Hirst’s VIKINGS television series depicts the temple to Odin at Uppsala as a wooden stave church in the mountains. The historic temple was actually situated on flat land and the stave churches were a hallmark of Christian architecture from the 11th Century onward.

5. Crucifixion by Christians!? Hirst’s VIKINGS program portrays a crucifixion of a prominent character, the Christian monk, Athelstan, who had been abducted from Lindisfarne monastery, as being crucified by orders of a Christian bishop in Wessex! There is absolutely no case recorded where Christians used this form of execution to punish apostates. The Emperor Constantine officially outlawed crucifixion in the 4th Century. Not only would such a mode of execution be abhorrent and blasphemous to any Christian, but there is no example of any Christians anywhere, let alone in Wessex, in the 9th Century, practising it. Since the Roman era, only anti-Christian groups, such as Communists, or Muslims, have been known to use the crucifixion torture against Christians.

6. Anachronistic clothing and fashions. The wardrobe department has evidently had a lot of fun clothing the actors. However, many of the fashions seem more 20th and 21st Century, particularly the leather trouser designs. Some of the outfits seem to have come from a futuristic Mad Max episode. As for the bizarre and impractical hairstyles, shaven heads and superabundance of tattoos, it would appear that great liberties have been taken with actual Viking culture and history.

7. The dates don’t add up. Appropriately, the VIKING series begins with 793 A.D., with the launch of the Viking age, the notorious raid on Lindisfarne monastery. However, the same man, Ragnar Lodbrok, who is meant to have been involved in the raid of Lindisfarne, is historically the one who led the siege of Paris in 846 B.C. That would have made him extremely old indeed by that time if he had also been at Lindisfarne in 793!

8. Rollo was not Ragnar’s brother. The famous Viking Rollo (846 – 932 A.D.) seized Rouen in 876 A.D. and led the Viking fleet that besieged Paris 885-886 A.D. He was baptized as a Christian, married a French princess and it was his great, great, great grandson, William the Conqueror, who invaded England in 1066 and became William I of England. Therefore, Rollo is one of the ancestors of the present-day British Royal family. Chronologically, there is no way he could have been contemporary with Ragnar Lodbrok, let alone his brother.

9. What do we know of Ragnar Lodbrok? The Norse Sagas identify Ragnar Lodbrok as the father of Ivar the Boneless, Björn Ironside, Halfdan Ragnarsson, Sigurd Snake-in-the-Eye and Ubba. He was married three times:  to the shield maiden Lagertha, to the noble woman Dôra, and to Aslaug (all Scandinavian women). Ragnar was the son of the Swedish king Sigurd Hring and a cousin of the Danish king, Gudfred. He distinguished himself with many raids and conquests, including the first siege of Paris, 846 A.D. He was seized by King Aella of Northumbria and killed by being thrown into a pit of snakes. His sons avenged him by invading England with the Great Heathen Army in 865 A.D.

11. The Missionary Ansgar was not the failure that Hirst depicts being executed by queen Aslaug when he failed a test. In fact Ansgar (801-865) known as The Apostle to the North, not only lived a long life, but succeeded in winning Vikings to Christ. Numerous miracles accompanied his ministry and so impressed the Vikings, that they concluded that Christ is greater than Thor. Not that you would know any of this from watching Hirst’s History Channel fiction.